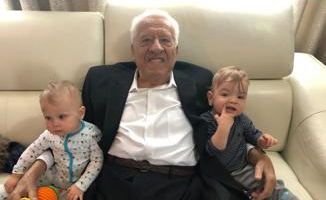 (AJNews) – I was very fortunate to live my life in the same city as my parents. Even as a child, I found it very interesting to hear my father’s stories. He was truly a charismatic storyteller.

My dad was born in 1930 in a small Ukrainian town of Belaya Tserkov. In 1941 he, his mother and his 3-year-old brother evacuated to Siberia, while his father was at the front fighting. My grandmother died in my dad’s arms from starvation in 1944 and my father went through so much adversity trying to survive with his little brother.

After the war, he settled in Kiev. He finished 6 years of school that the war had interrupted in just 2 years. He loved to learn and he had a passion for studying. He graduated from the Kiev State University with distinction and successfully completed his masters by the age of 25. In spite of having a great job and a decent life in Kiev he always thought first about what the future held for his two daughters. He immigrated to Edmonton with his wife and children at the age of 50, learned English, got a government job and opened a petrography business on the side.

In spite of all the hardships that my dad endured in his younger years, he maintained a most positive attitude towards life. He enjoyed his grandchildren tremendously, taught them how to swim, skate, and do math, and he spent every winter vacation with them. He was a walking encyclopaedia on history and politics and he loved gathering information on Jewish history and prominent leaders and presenting it as lectures at the Jewish Senior Citizens Centre in Edmonton. His passion for learning never waned and he enjoyed teaching and also helping new immigrants with taxes, translations etc.

To the last day of his life he had a smile on his face and enjoyed his kids, grandkids and great grandkids. We all miss you dad. Hopefully your fantastic brain and positivity will live on in the generations to come.

Be the first to comment on "In Memory of Dmitry Alman"