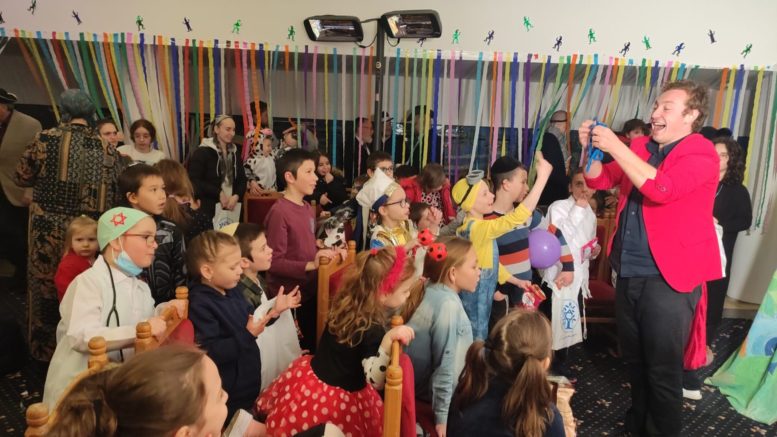 NEPTUN, Romania (JTA) — Hundreds of Jewish children from Odessa shook the Romanian Black Sea resort of Neptun out of its winter lethargy with a Purim party that, at least for a little while, usurped the tragic reality in their homeland.

“It is not easy knowing what’s going on at home, but it is a mitzvah to be happy for Purim; they’ve been through a lot and deserve to have a great time this evening,” said Alina Feoktistova, one of the organizers, before the start of the event on Wednesday.

Like nearly everyone else among the 800 people celebrating Purim in Neptun this week, Feoktistova is associated with Tikva, an Orthodox Jewish aid organization based in Odessa that serves vulnerable Jewish children.

Tikva drew international attention in the days after Russia’s invasion of Ukraine Feb. 24 for its efforts to evacuate the children in its care, frequently identified in news coverage as orphans. In fact, Tikva largely serves a wide range of families, including those who cannot care for their children because of finances or dysfunction.

In addition to providing food, shelter and education, the group also seeks to help the children and young adults in its care embrace Judaism, after decades of covert and official antisemitism under communism alienated their parents and grandparents from their roots.

Feoktistova joined Tikva when she turned 16. Her family had no money to keep paying for her studies, so she finished high school at one of the organization’s centers, then earned a degree in English and foreign literature from its university program. Feoktistova started a family within Odessa’s Orthodox community, of which she has since become a pillar.

“Odessa was the most amazing place for Jewish people,” she told the Jewish Telegraphic Agency. Switching between past and present tense, she went on, “We have everything there: a synagogue, holidays, Jewish festivals, Shabbat … and also Jewish schools for all types of observance.”

Speaking amidst the excited screams of children at the lobby of one of the two hotels fully rented by Tikva in Neptun, Feoktistova added, “It was like in any Jewish community in Israel or America, perhaps with less kosher food.”

Running the show together with Feoktistova from a small office in the hotel is the CEO of Tikva Odessa, Rabbi Refael Kruskal.

“As soon as the bombs started falling we took people out with buses through Moldova,” said Kruskal, who said he is deeply thankful to the Romanian Jewish community for the help they have offered.

Kruskal came to Odessa in 1999 from London, following in the footsteps of Odessa Chief Rabbi Shlomo Baksht, who moved to the Ukrainian port city in 1993 to revive Jewish life in the post-Soviet era.

“Odessa is a beautiful place and the people of Ukraine have always been very kind to us,” said Kruskal, who added that he had never experienced antisemitism in Ukraine, which Russian President Vladimir Putin has disparaged as being full of Nazis.

While some Ukrainian Jews have decided to immigrate to Israel because of the war, Tikva’s CFO Jeremy Posen said everyone associated with the group wants to get back to their life and many projects in Odessa — as long as the city, which is braced for increased bombing, remains under Ukrainian control.

“If the Russians take over it will be cut off internationally as happened with Crimea, and the only way out will be flying through Moscow,” Posen said. “That’s not a scenario we contemplate at this time.”

David Dima was born 28 years ago in Chernivtsi, near the border with Romania. He was raised by his paternal grandparents, who are part of the Romanian minority in Ukraine, and enrolled in a Tikva school at 12 when his Jewish non-religious mother found out about the organization. Dima studied law at the Tikva university and now works for the organization. He is married to a fellow member of Odessa’s Jewish community and the young couple have a child.

“I’ve lived in the community for many years; we’ve got a good education here and we are like a big family, everyone helps each other,” said Dima, whose sister is also associated with Tikva.

Sitting at the hotel bar was 75-year-old Zina Ioshka, a retired music teacher from Odessa who made it to Neptun with her daughter, who became Orthodox and affiliated with Tikva. Visibly sad and tired, Ioshka looked at the children running up and down and recalled her days as an educator at a public school in Odessa, where her sister remains.

“I just want to return as soon as possible,” she said.

In the early evening as Purim began Wednesday night, two Romanian entertainers from the coastal city of Constanta started their puppets and magic show for the children. At first, they were unable to break the language barrier, and the audience looked bored. But music and a few tricks by Ciprian the Magician lit up the room.

Dressed as animals, doctors, pilots, butterflies, Roman centurions, Biblical figures and American superheroes, the children followed his movements with their eyes fixated on a table that levitated. Objects appeared and disappeared from Ciprian’s hat. The children looked at each other in disbelief, and burst into cheers in astonishment.

When the show ended, adults started preparing for the Megillah reading, the ritual recitation of the Purim story of Jewish survival. Volunteers including Pearli Brown and Dana Lipschitz, who flew from Israel to spend the holiday with the kids, helped with the face painting.

In the line stood Silviu Vexler, a member of Romania’s parliament and the president of Romania’s Federation of Jewish Communities.

“The children have to feel Purim as a moment of happiness even in the dramatic context of war that brought them here,” he said.

Be the first to comment on "In a Romanian resort town, Jewish children from Odessa celebrate Purim as refugees"