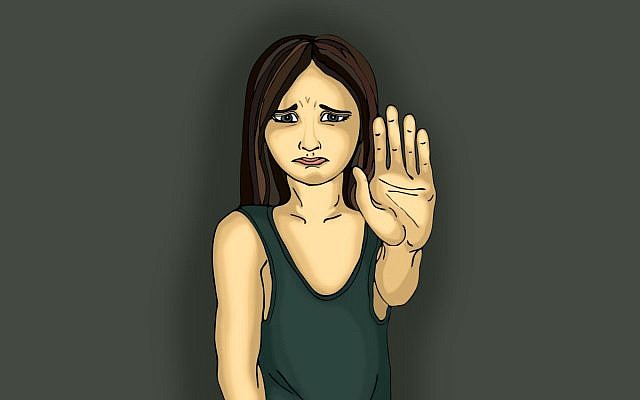 This author writes how micro-aggressions during her childhood years still affect her today. Kveller/JTA

(Kveller via JTA) – We have a great rabbi in our congregation — and I’m not talking about the one I get to sleep next to every night. A powerhouse came into our community a few years ago, and her combination of old-school wisdom and new-school strength has been enlightening to me, specifically in this new #MeToo age. She recently introduced me to the term “microaggression” and, for better or worse, I now view my childhood in a whole new way.

Every morning growing up, my father would greet me with a slow smile in the kitchen and say “Let me check the merchandise.” He would give me a little tickle and a kiss on the cheek and, nodding with approval, he would send me off to school with “Yes, yes, you will get married.”

I never thought much of these interchanges as I trotted off to school. His stories of his childhood in Iraq in the 1940s were unrelatable to me as a kid in an affluent Chicago suburb in the ’80s — a girl with a busy working mom and good grades and lead roles in the school plays. I knew my dad was raised in Baghdad. I knew the Iraqi capital was a place quite unlike our suburb.  I thought it was filled with magic carpets and matchmakers and a square where women were bought and sold.

Whether these details were true or not, I did know for certain that women were not considered equal to men. I knew in Baghdad, my father lived in a cramped house with his nine brothers and sisters. They all shared a single room, except for the prettiest daughter. She got her own. The girls didn’t go to school after they were 13; they stayed home, learning to cook and clean, until the time they were married off.

I heard my father’s stories daily about the differences in boys and girls. At some point I realized he told them without an ounce of reflection — just amusement about the “good old days.” I told myself all this talk of marriage in our daily rituals didn’t bother me. I told myself it was sweet; it was his way of saying that I looked nice or I was growing up well.

I never considered saying “no” to him — like when he coerced me into singing at a Shabbat dinner, or told me I didn’t need to worry about making money because he will find me a husband to do that. I never did well at math, so he would laugh and quiz me on the basics about what things cost rather than teach me how to do a real estate transaction the way he taught the boys in my family.

My mother’s talents as a singer seemed to be the butt of many of his jokes —pretty soon, she stopped singing altogether. The fact that she finished her doctorate after her fourth child was born, then began a full-time job as a school psychologist, did not abate my father’s messaging about women’s lesser status.

Nor did her career do much to enhance my understanding of women’s equality. My mother seemed locked into her own dance of acquiescence. She wanted so badly to please him, to make the Israeli salad to his liking or to spend money the way he saw fit. Though she was passionate about her career, I absorbed my father’s message that salary was inconsequential to our household.

I was content being my father’s unspoken favorite. I gave him every concession and tried to explain this to my sisters when his insensitivity became too much for them to tolerate. But then, one day I woke up. I had become an adult. I was married, I had two daughters. Suddenly I realized I had grown less tolerant of my father’s ongoing list of intolerances. Questions about my performing career fell into “Are you Barbra Streisand? No? It’s OK, now you are married. You are not my headache anymore.”

Hearing these nuggets laid before my own two daughters was eye-opening and heartbreaking. In my own home I would never tolerate comments about my girls’ weight or their clothes. My girls love their Saba, but they are strong women — stronger than I ever was at their age and perhaps ever will be. They tell him plainly that just because he was born in a different time and place, he does not get the free pass I gave him. They are clear that they respect him, but they know things, too — about money and politics and futures that have little to do with marriage or children.

Amid the controversy surrounding the confirmation of Supreme Court nominee (and carpool dad) Brett Kavanaugh, I can relate to accuser Christine Blasey Ford’s feeling of not knowing how to speak up — or even that she could speak up. After all, throughout most of our lives, men have been in charge, and they’ve been forgiven for all sorts of questionable or demeaning behavior. For so many of us, to be a woman today is to be a survivor of microagressions by the men and boys in our orbits.

As a mom who is now recovering from these microaggressions, I see how self-esteem can easily be eroded by these mutterings. The litany of assumptions I heard growing up sounded loving to me, but as an adult woman, I now see them as a thin veil for fear and aggression. Bad behavior unchecked simply breeds more bad behavior. And the task of understanding it alone is not enough.

The question before us now is this: How can we teach respect with RESPECT, and without anger to those whose actions have been disrespectful, especially when the disrespect was subtle and insidious? We do so by learning. We can learn through our community leaders, like the clergy I am blessed to know and who teach my children and me. We learn that if for one moment we are made to feel anything other than the full scope of humanity that we are, we need to compassionately call that behavior into the open.

None of us, regardless of age or geography, gender or race, are exempt from this work. Both my children and my teachers have offered me new vocabulary to address my grievances. Through new terms like “micro aggression,” I’ve found the freedom to question behavior that caused me to suffer. And the more I learn, the more I can continue to integrate teachings into my interactions with my father.

It’s not easy. What used to feel like fun banter between us is now often heavy or taut. But I have hope. We may not get there in this lifetime, but I am in it for the future for my children and the well-being of us all.

(Michelle Azar works an actress and singer on TV and in film and live theater. Her highly acclaimed solo show “From Baghdad to Brooklyn” will be appearing in New York City in November.)