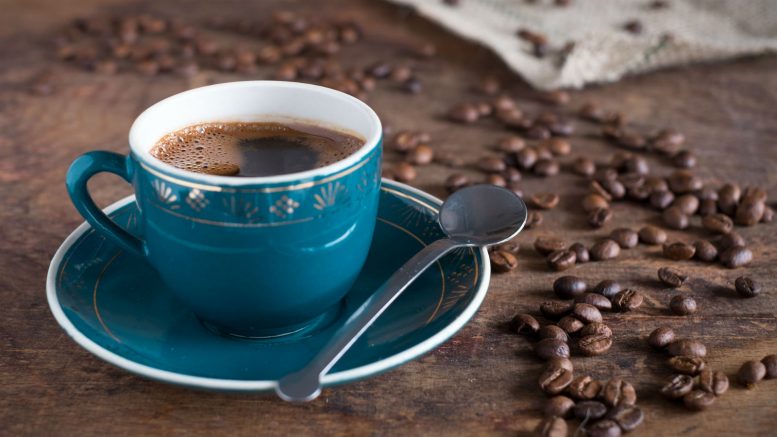 By Ronnie Fein (The Nosher) – Imagine eight days without coffee. For people like me who go to sleep dreaming about the morning’s first mugful, that prospect is unthinkable. But once upon a time, such was the rule for observant Jews during Passover. Coffee beans were thought to be legumes and therefore prohibited according to Ashkenazic tradition. Grocery stores catering to a large Jewish clientele packed the coffee away until after the holiday and everyone just had to do without.

So I give thanks to Joseph Jacobs, who changed all that. Jacobs was the advertising manager for the Forverts (the Yiddish Forward) way back in the 1920s. He consulted with several rabbis who understood that coffee beans were not beans at all! They just look like them! What we call coffee beans are actually the seeds of the coffee cherry, which makes coffee a stone fruit, just like any old peach, plum, or other variety of cherry.

The rest, in the words of Hillel, is commentary.

Of course Jacobs’ motivation wasn’t his desire to sip a cup of joe during Passover. What he wanted was to get Maxwell House to advertise in the Forverts, and that he did. The campaign was such a huge success for the paper and Maxwell House sold so much coffee that Jacobs convinced the company to publish a Haggadah and give copies away free with a can of Maxwell House coffee during the holiday.

The first edition of the now famous Maxwell House Haggadah came out in time for Passover 1932 and has been printed every year since, with the exception of two years after World War II, when there was a paper shortage. Since then over 50 million copies have been printed. The Maxwell House Haggadah is the one I remember from my childhood. With splotches of grape juice and Manischewitz wine on its pages. With its accessible English text alongside the Hebrew that made it easy for Uncle Irving to lead us through “Dayenu.” If I close my eyes I can still hear us chanting, “It would have been sufficient!”

Even still, though new Haggadahs come out all the time, the one from Maxwell House is the most widely distributed of all. Barack Obama, who initiated the first White House Seder in 2009 and hosted one every year throughout his presidency, read from the Maxwell House Haggadah.

Over the years Maxwell House has revised the text. At some point an Ashkenazic transliteration was included, and in later years the language was modernized to less formal wording (no more “thees” and “thous”) and to include gender-neutral words — “four children” rather than “four sons,” for example. The iconic blue cover that so many of us over a certain age have in our memory bank was first replaced with four-color photos of traditional Passover foods and a shot of Grandma holding a child reading a Hagaddah. This year it now features a Kiddush cup and matzah.

You can still get a free copy of the Maxwell House Haggadah with a purchase of a can of coffee at certain supermarkets, or you can get copies from Joseph Jacobs Advertising (there’s a $2 shipping cost). Of course, if you want one of the classic editions, I found one on Amazon (for $20), and last time I looked there were 10 copies of the 1965 version on eBay for $31.

As for the coffee itself, well, American coffee lovers have a lot more choices than canned Maxwell House these days. But while coffee is no longer considered kitniyot and therefore is generally OK, be aware that not all coffee is kosher for Passover. And there are some special concerns particularly regarding decaf, flavored coffees, and pod coffees. But hopefully you can find a variety that works for you so you can still go to sleep dreaming about your next cup, Passover or not.