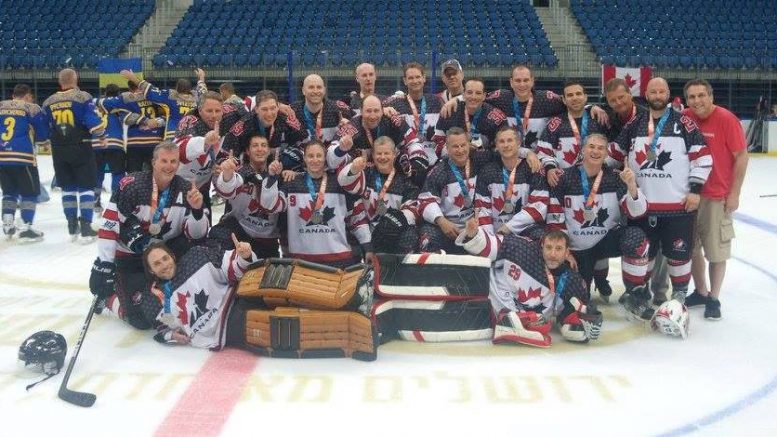 With goaltender Launy Schwartz in net, the Canadian Masters Hockey Team won a silver medal at the 2017 Maccabiah Games in Israel.

(EJNews) – Choosing to play hockey was not inspired by my father Stanley, whose version of a stick was an antique cane. My Mother Nina may have grown up going to the Montreal Forum and watching the Canadiens, but she didn’t push me towards the rink either. Yet there I stood, age six, at Thornhill Community Center’s “East” rink holding on to the boards, trying to skate with my Puppa.

I was soon registered in the Thornhill Community Hockey League (TCHL). I was the worst skater on my team. Then came the final game of the season. There stood our goalie, Yale Harris, at his crease – he got sick on the ice. We needed a new tender. I shouted, “I play goal in road hockey.” So, with my shin pads still on, the coaches stuffed me into the equipment. I became a goaltender.

Growing up I would play “Select” in House League, and eventually would go on to play “AA,” but never got any higher. By age six my father had passed away, and travelling was not easy for a single mother with two kids. Add the expense of equipment and travel, rep was no longer practical, but my Mom wouldn’t deny my passion for the game. I would continue to play in the TCHL. Sadly, she passed away when I was seventeen. 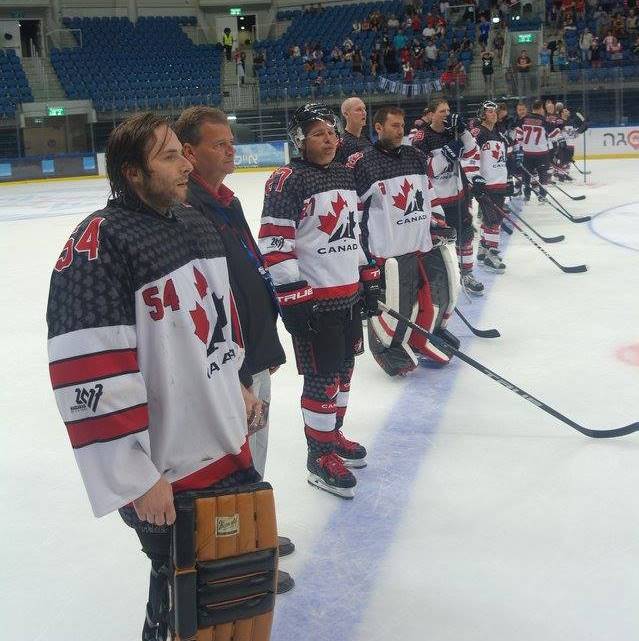 So how does a kid who plateaued at AA manage to wear the Maple Leaf on his chest at the Maccabiah Games? Cue the cliché – perseverance and dedication. I had a great foundation from working with Mike LoCicero in my youth. He taught “butterfly” when it wasn’t the dominant style. His teachings served me well for many years.

For the uninitiated, Beer League and Pick-Up is where players go once “organized hockey” is over. It was there that I learned what it was like to play against guys that had certainly played beyond AA. I welcomed that challenge as it helped me further develop my abilities. From my mid-twenties and onward I would start to get asked “where did you play your Junior/College?” – my answer? “Nowhere.” It’s uncomfortable describing this scenario because I never thought of myself as being that good, but when guys who have “been there” kept asking, I had to start believing in myself.

By the time I was nearing 30, butterfly had evolved. There is no other goalie I identify with more than Chris Osgood (now retired) of the Detroit Red Wings. He was a throwback to the 80s, but as the Dylan song goes, the times they were a changin.’ Ozzy spent a summer learning to evolve with the new style of butterfly, and so came time for me to follow suit. 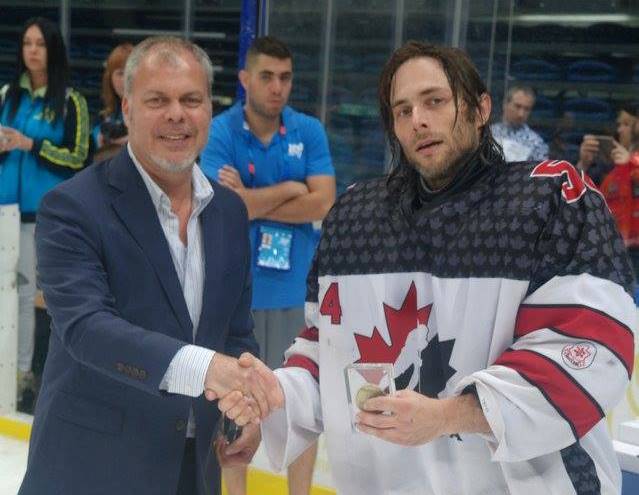 Goaltender Launy Schwartz receiving Canada’s Player of the Game Award to go with the team’s silver medal in Men’s Masters Hockey at the 2017 Maccabiah Games in Israel.

I approached McGuire Goaltending and Hockey Development to see if I could apply my experience as an instructor. Despite a resume that did not include “Pros/Junior/College,” I had my audition and passed. This is where my game would begin to mirror Osgood’s.

Jamie McGuire (aka “Mags”) is a mentor to me – as a goalie, and as a coach. There were times I would suit up at his Camps, much to the delight of the students. The shooters, all of whom were AAA or higher, would relish the idea of shooting on the “old man.” Their reaction was familiar – “you never played beyond AA?!”

Mags had never seen me play a game until many years after my fateful first day. It was a Tournament for Canada’s Men’s Standing Amputee Hockey Team, for which he was the Head Coach. After the tourney he quipped, “You’re really good.” Now Jamie had a penchant for kidding around, but he was serious. This gave me a sense of confidence that I had never felt.

Not long after, Shawn Frydberg, whom I had been playing hockey with for nearly 20 years approached me to try out for the Men’s Masters Hockey Team for the 2017 Maccabiah Games. Tryouts weren’t for quite a while, but when the time arrived, I went out and I did what I have spent the majority of my life doing – Stop Pucks. I made the team.

Throughout the year leading up to the Games, we had practiced as a team, played in some tournaments as a warm up, but here we were, in Israel, representing Canada at Pais Arena in Jerusalem. Talk about surreal! 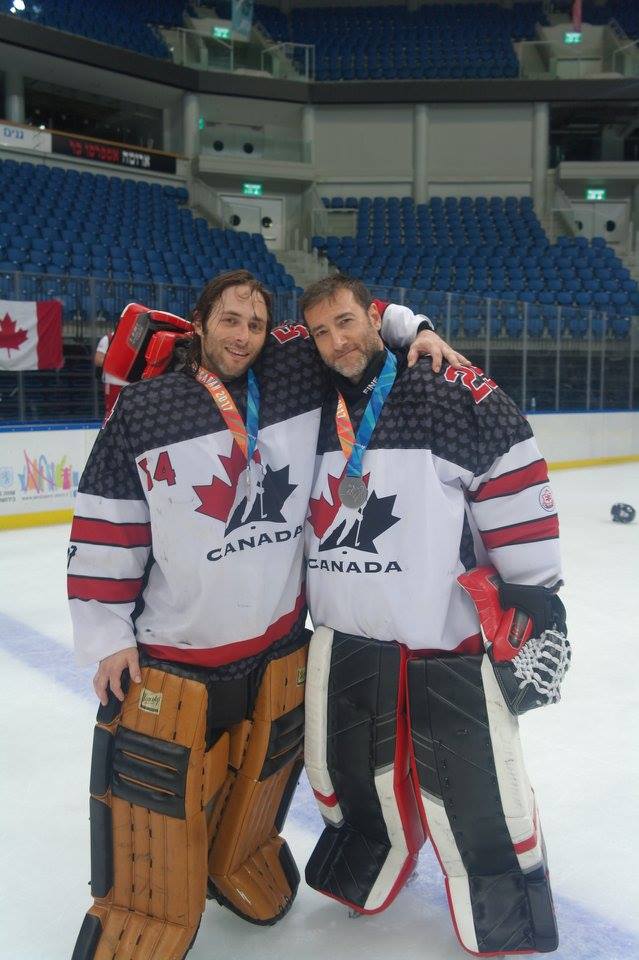 We played against teams from the USA, Israel, and the inevitable Champions, Ukraine. After the Ukraine walked through everyone by double digit scores – including an 11-2 victory over us in the round robin – I came into the final knowing what I was up against. These guys were all pros, led by former NHL All-Star, Alexei Zhitnik. Someone counted that I faced 80 shots. Despite the 6-2 loss, I was named Canada’s Player of the Game.

Afterwards, one of their players, Sergey Razin, insisted on giving me his jersey. He was a player I made sure I was focused on while his red, white, and blue gloves were dangling along the ice. When receiving his jersey, he asked if I had played pros. By now you know my answer, and his reaction was the same as all before him.

So, there I was, a AA kid, born in Montreal, raised in Thornhill, standing at center ice in Jerusalem with a Silver medal around my neck, the Team Canada logo on my chest, and an immense sense of pride in being Jewish. Outside of hoisting The Stanley Cup over my head, it doesn’t get any better than this.

To my friends, family, newfound brothers, and anyone who helped make this journey the experience of a lifetime – Todah. Until next time…

Launy Schwartz calls Toronto home, and is the Founder of Stop the Puck Goaltending Inc. To find out more, visit stpgoaltending.com.

Be the first to comment on "From House League to Maccabiah Games: A goalie’s journey on Team Canada"