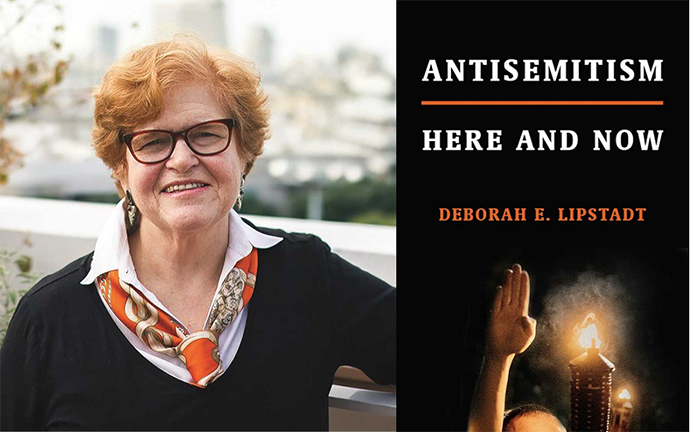 Renowned historian Deborah Lipstadt gave a powerful address to the Alberta Jewish Community at an Anti-Semitism webinar hosted by the Calgary Public Library and the Calgary Jewish Federation. 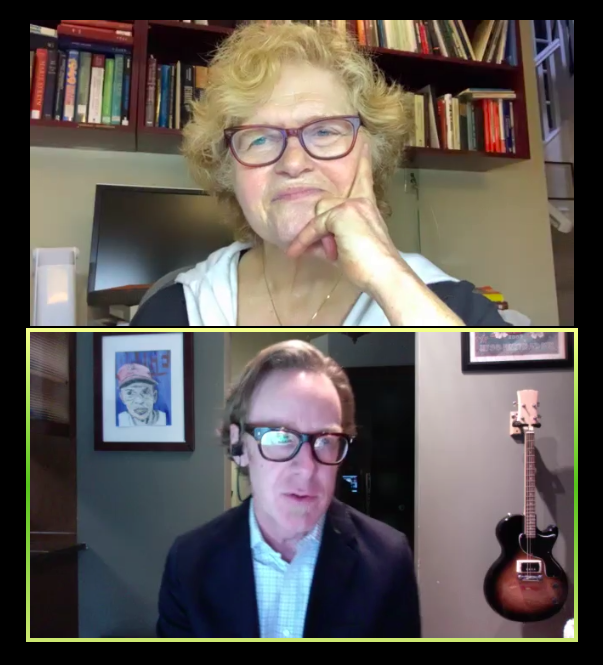 Deborah Lipstadt with Calgary Jewish Federation co-president Jared Shore who was an exceptional moderator of the event.

“Her latest book, Antisemitism Here and Now, reminds us of the imperative to take off our blinders to our own biases and call antisemitism what it is,” said Calgary Jewish Federation co-president and event moderator Jared Shore.

“Dr. Lipstadt is an inspiration to the Jewish community and those who stand with us against hate in all its forms. Her work continues to help strengthen us through honouring our past and looking to our future,” Shore added.

“I want you to know how touched I was by the fact that this is being hosted and organized, in part by the library,” Lipstadt said in her opening remarks.

“One of the earliest acts of treachery of the Nazi regime in 1933 was the book burning in May of 1933,” added Lipstadt who referenced Heinrich Heine’s cautionary observation a century earlier – “Wherever they burn books, in the end will also burn human beings.”

During her informative and engaging presentation, peppered with wry humour, Lipstadt – the Emory University professor and author who was sued by Holocaust denier David Irving and portrayed by actress Rachel Weisz in the 2016 feature film Denial – presented a compelling case for the continued fight against both hard core and soft core antisemitism, empowering listeners to speak up when they encounter antisemitism and racism of any kind.

“An antisemite is someone who hates the Jew more than absolutely necessary. If I hate you one iota more because you are a Jew, that’s antisemitism.”

While antisemitism is sometimes expressed in a seemingly positive fashion – “Some of my best friends are Jewish!” – it is an example of prejudice in which people are judged, “not by what they do but because of the group they come from,” Lipstadt said.

There are some elements that distinguish antisemitism from other forms of racism, Lipstadt said. While looking at people of colour and thinking lesser of them, the racist says “there goes the neighbourhood,” added Lipstadt.

The antisemite “punches up,” despising Jews as richer, more powerful and smart, though “not in an affirmative way.”

“The Jew becomes the threat,” noted Lipstadt who referred to such views as “culturally entrenched” and “ubiquitous.”

Lipstadt said that not unlike the current COVID-19 pandemic, antisemitism throughout history has mutated, spawning infinite and often deadly variations beginning with the way that the New Testament story of Jesus’ death was used in succeeding generations to vilify Jews.

From there, antisemitism morphed beyond religion moving to Voltaire, Karl Marx, the pseudoscience of eugenics and, eventually the Nazis, Lipstadt said.

Today, antisemitism is occurring both on the political right and political left, said Lipstadt, citing recent manifestations within Britain’s Labour Party and on college campuses as examples of the latter. Some on the left erroneously consider all Jews to be white, to enjoy class and to have privilege, thus believing that they can’t possibly be victims. The problem is compounded when those on the political left reject the possibility that they themselves might harbour biases, Lipstadt said.

When antisemitism occurs on the extreme right, as has been increasingly evident in the United States in recent years, it tends to be expressed in a more violent fashion, Lipstadt said, referencing the Charlottesville Unite the Right rally where marchers with torches chanted “Jews will not replace us,” “Heil Hitler”, and “Next stop Charlottesville, final stop Auschwitz.” Other recent examples cited by Lipstadt included murderous attacks at synagogues in Pittsburgh and San Diego and an attempted massacre at a Synagogue in Halle, Germany.

Lipstadt noted that disturbing attacks from the far right are also targeted at non-Jews, referencing deadly mass shootings at an El Paso Walmart and the mosque in Christchurch New Zealand.

Those involved in these and similar violent attacks, are often motivated by white genocide theory, Lipstadt said.

Such sentiments are held by many who stormed the US Capitol on January 6, Lipstadt said, adding that those who embrace these views believe that the “puppet master” behind the threat is the Jew.

Lipstadt shared an overview of types of antisemites, from the easily identified extremist to the “dinner party” or “salon” antisemite, “Someone who doesn’t think of himself or herself as an antisemite but will say: Oh, my firm just hired a new associate. He’s a Jew, but he’s very honest.”

There is also the “enabler,” says Lipstadt, “the person who stirs up the pot.”

“We’ve seen it in the leadership of the United States in the past four years, a failure to condemn . . . the dog whistle, the wink-wink, nod-nod,” Lipstadt said.

“The clueless antisemite” is, according to Lipstadt, one for whom culturally entrenched antisemitic tropes roll off the tongue without a thought.

Lipstadt urged the audience to be the “unwelcome guests at the dinner party” by challenging unacceptable remarks.

“Telegraph the message to the other people at the table, the children in particular . . . that this kind of talk and these kinds of attitudes are unacceptable.”

“We live in such a charged atmosphere now that we have to say something,” Lipstadt said, adding that we must also do so when others are the target of racism.

“We cannot be selective about the “isms,” said Lipstadt.  “We can’t fight one and not the others.”

“We like to say ‘Never Again.’ The sad thing is, since the Holocaust it has not been never again. We’ve seen Rwanda, the former Yugoslavia, the treatment of the Chinese Muslims.”

Lipstadt urged the audience to be cautious when levelling accusations of antisemitism.

“Sometimes there is criticism that is valid. You might not agree with it, but it is not antisemitism. We have to be careful when we call people out on antisemitism. It should not be said lightly.”

This applies to the automatic assumption that those who speak critically of Israeli policies are ipso facto antisemitic. Criticism of Israel does become problematic when Israel’s right to exist is called into question and when Israel is subjected to “singular focus that is not applied to other countries,” Lipstadt said.

Stressing the significance of the Library bringing Holocaust education to the virtual town square, Lipstadt circled back to the power of words.

“It never begins with genocide. It begins with words. So on a night when I am being hosted, in part, by the Calgary Public Library, I stress to you the importance of words. Be careful of the words we use, be careful of what we say.”

Every bit as importantly, Lipstadt urged members of the Jewish community to celebrate their Judaism from a place of strength and celebration rather than victimhood.

Antisemitism isn’t what makes us Jews, said Lipstadt adding, “That is the despite.  It isn’t the because.”

Ending on a high note, Lipstadt said, “We are very blessed to be bearers of a very rich and very multifaceted tradition that has given so much to the world. May it continue to do so and may we be part of that effort.”

Jared Shore told Alberta Jewish News that about half of attendees signed in to Deborah Lipstadt’s talk via the Library’s website and Facebook page, indicating significant engagement in the broader community.

“Her big message is that while we need to be vigilant, we can’t allow antisemitism to define us,” Shore said.

“It was an important event. The broader reach created by the library is favourable for our future.  We need partners in wrestling with antisemitism,” said Calgary Jewish Federation CEO Adam Silver who lauded the efforts of Library staff and Holocaust and Human Rights Education co-chairs Marnie Bondar and Dahlia Libin in the organization of the event.

“We are really proud of the fact that Deborah’s talk resonated with so many people,” said Libin, who was impressed by the many deeply thoughtful post-event survey comments from attendees who reflected on their own biases and behaviour.

“The survey confirmed that many people watched with their families, meaning we hit a younger crowd,” said Bondar. “That’s a big deal.  We want our kids to speak up.”