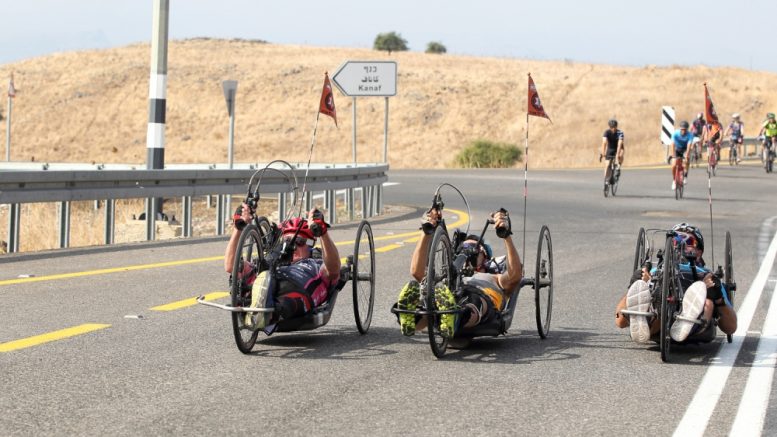 (November 2019) The 12th annual Courage in Motion, an initiative of Beit Halochem Canada, Aid to Disabled Veterans of Israel, was an outstanding success. This year’s ride welcomed cyclists from across Canada, joined by some Americans and Israelis. From October 27-31, these international cyclists rode alongside Israel’s disabled veterans on five fully supported routes through northern Israel’s extraordinary archaeological sites and remarkable landscapes.

Fundraising is open until December 31, 2019 and it is expected that the ride will raise approximately $750,000 (CDN). Our sponsors’ generous support and the dedicated fundraising of our cyclists facilitated the participation of more than 100 injured Beit Halochem Israel members in Courage in Motion 2019. Money raised also funds programming at Beit Halochem Centres in Beer She’eva, Haifa, Jerusalem, and Tel Aviv. Thanks to the ongoing success of the ride, cycling has steadily grown in popularity at the state-of-art Centres.

Lisa Levy, National Executive Director of Beit Halochem Canada, is the ride’s founder. An avid cyclist herself,she says “Cycling in Courage in Motion means visiting Israel, supporting an incredible cause, and connecting directly with our members. Beyond the ride’s huge fundraising component, I never fail to be excited by witnessing lifelong friendships taking shape. It is truly a life-altering experience that you never forget and one that participants want to repeat!”

Annually, the ride welcomes both new and repeat participants. This year, returning cyclists included Torontoborn Keith Primeau, who rode in last year’s CIM for the first time. Primeau enjoyed the experience so much that his daughter Kylie accompanied him this time! Primeau played 15 seasons in the National Hockey League (NHL), most notably with the Philadelphia Flyers, prior to his career being cut short due to multiple concussions. He cowrote a well-received book, Concussed! Sports-Related Head Injuries: Prevention, Coping and Real Stories (2012) detailing life after concussion. Other international returnees included former cycling champion Eon D’Ornellas, who competed throughout the 1970s and 1980s on behalf of both Canada and his native Guyana. The proprietor of Toronto’s D’Ornellas Bike Shop, he started a cycling club over 25 years ago. In 2011, D’Ornellas, then 59-years old, suffered a stroke during a club training ride. Like Beit Halochem members, these two star athletes know intimately the challenges in reclaiming their lives following serious medical trauma. Among the Beit Halochem members participating in Courage in Motion 2019 was Asi Mekonen. In 2012, just prior to his release from the Givati Brigade, Asi suffered severe head injuries, with resulting brain damage, vision and hearing impairment, and memory loss. Following five years of physical and cognitive rehabilitation at Beit Halochem, Asi is now a Jerusalem-based musician. Besides experiencing several Courage in Motion rides, he has completed two marathons. Asi was already known to many of the ride’s Canadian riders through his on-stage appearances in this year’s Beit Halochem Canada Celebration of Life Concerts.

Our CIM cyclists may have rode alongside a future Paralympics hand-bike medallist. Critically wounded in 2002 in a military operation while serving in the Artillery Corps, Amit Hasdai was left with paralysis on the right side of his body. During rehabilitation, he benefitted from equestrian therapy, later competing internationally. Since turning to hand-bike racing at Beit Halochem Tel Aviv, Amit has enjoyed participating in Courage in Motion. Amit’s natural talent, enhanced by Beit Halochem’s support of his training and coaching, has resulted in his current ranking of 8th in the world. He is training hard to qualify for the 2020 Paralympics in Tokyo.

Courage in Motion’s participants enjoyed group activities including a cycling tour of the famed, beautiful agriculture region of the Hula Valley and an extraordinary evening with Israel’s Heroes – all Beit Halochem members – who shared their remarkable personal stories of tragedy and resilience.

The next Courage in Motion takes place in Israel from October 18-22, 2020. Registration is expected to open in March 2020. See here for images from this year’s ride.

Beit Halochem Canada, Aid to Disabled Veterans of Israel is committed to rehabilitating, rebuilding, and enhancing the lives of over 51,000 Israelis who have become disabled in the line of duty or through acts of terror. Leading-edge Beit Halochem Centres in Jerusalem, Tel Aviv, Haifa, Nahariya, and Beer Sheva, and the future Ashdod (scheduled to open in 2021), provide individualized therapies, specialized sports rehabilitation training, and cultural arts and family-oriented programming. Academic scholarships are available as our veterans endeavour to be productive members of Israeli society. Beit Halochem is the sole organization to take care of Israel’s wounded heroes from the time they are injured and for the rest of their lives. We assist them on the long and difficult journey to regain their health and independence, empowering them as they strive to reclaim their lives.