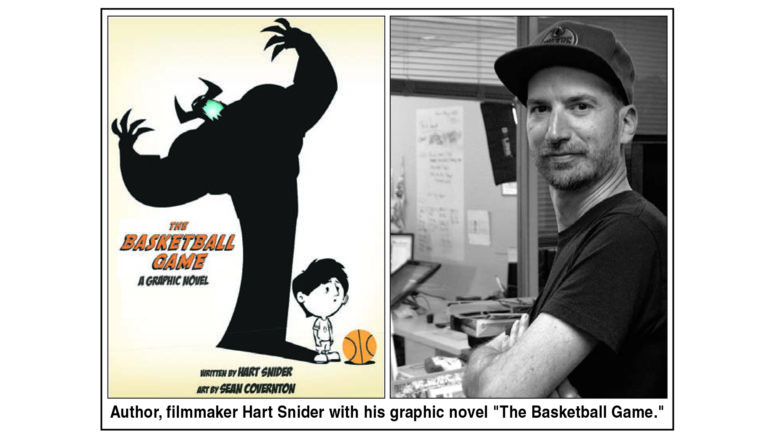 (AJNews) – Edmonton-born Jewish writer and filmmaker Hart Snider has released a graphic novelization of a short film he made set at a Jewish summer camp in the midst of the James Keegstra scandal.

“The Basketball Game” takes place in 1983 at our very own Camp BB (now called Camp BB-Riback) located at Pine Lake, just outside of Red Deer, which Snider was attending for the first time as a nine-year-old.

In nearby Eckville, Alta., Keegstra — a teacher and the small town’s mayor — had been charged with promoting hatred for teaching his students Holocaust denial and other antisemitic conspiracy theories.

The title comes from a basketball match that Jewish and Eckville community leaders organized between Keegstra’s former students and the Jewish campers to show the students that Jewish people weren’t anything like Keegstra had taught them.

Snider, who now lives in Vancouver and is a documentary filmmaker, told AJNews that animation was the best format for telling this story in both film and print form.

“What I thought was so interesting was that with animation, we could go inside Hart’s imagination in the story and bring all these feelings to do with the Eckville students’ visit to life,” he explained.

He said he still vividly recalls aspects of the Keegstra affair, even though it occurred at such a young age because he came from a household that would have “spirited discussions” about what was in the news.

“There was a point where it kind of hit a peak after it wasn’t just Keegstra, but there was also other Holocaust denial in the news and I felt like there needed to be a community response,” Snider said. “I remember that feeling even as an adult.”

While the story is autobiographical, the writer took some degree of creative licence with particular details. For instance, the story includes a young version of his wife, Galit. Although she also went to Jewish summer camp, it wasn’t Camp BB.

The book, which contains translations of Yiddish and Hebrew words, such as ‘tsuris’, ‘Shabbat’ and ‘challah’, is intended for a broader audience than just Jewish kids.

Snider said the book’s message is especially important in the modern age, with a resurgence of antisemitic rhetoric that wasn’t as prevalent when he made the movie in 2011. He recalls hearing terms like ‘New World Order’ and ‘globalists’ for the first time during the Keegstra trial.

“I think people, unfortunately, are running into these terms either on social media, or all sorts of places online, and I think it’s something that needs to be talked about and addressed to hopefully give a little context for those people when they see those words,” said Snider.

He said, ultimately, he hopes readers come away from the story appreciating the importance of a robust Holocaust education.

“Instead of it just being this negative story, it might be a way to hopefully spur some conversations about hate speech, about the classroom, and about teaching, about students and parents talking to each other. Because I think that’s what led to stopping Jim Keegstra,” Snider said.

The book, whose art is drawn by Sean Covernton, is recommended for kids over the age of 12.

Who was James Keegstra?

James Keegstra was a high school teacher and mayor of the Town of Eckville, with a population of 760. He was also an unrepentant Holocaust denier and antisemite.

In December 1982, he was fired from his teaching job, where he had spread antisemitic conspiracy theories to his students, and was charged with wilfully promoting hatred about a year later.

According to reporting in the Red Deer Advocate, the school principal ignored Keegstra’s hateful views until parents brought it to the attention of the local school board and the Advocate reported it. He was criminally charged on January 11, 1984.

In July 1985, a jury found him guilty, and Keegstra was fined $5,000. His lawyer Doug Christie appealed the sentence, which was quashed in 1988 by the Alberta Court of Appeal, arguing hate speech laws were an infringement on his client’s right to free expression.

But upon further appeal the Supreme Court of Canada ruled that hate speech laws were a justifiable infringement on free expression, ordering a new trial. After another series of appeals, Keegstra was sentenced to a one-year suspended prison term and 200 hours of community service, in addition to a $3,000 fine.

As a teacher, Keegstra taught students that Jews were “money grubbers” and “gutter rats” who sought to control the world, according to the Globe and Mail.

He taught them that Jews were responsible for human sacrifices during the French Revolution, that women’s liberation, atheism and abortion were part of a Jewish conspiracy, that the Jews had orchestrated the Vietnam War and Watergate, and that then-prime minister Pierre Elliott Trudeau was secretly controlled by a Jewish cabal. He also claimed the gas chambers at Auschwitz were a fabrication made up by Jews to “gain sympathy,”

Keegstra graded students on their ability to regurgitate his antisemitic theories.

Born in Vulcan, Alberta, in 1934 to a family of dairy farmers, Keegstra moved to Eckville in 1968 after earning an education degree. Although he was trained as an industrial arts teacher, a teacher shortage had him teaching social studies.

It was around his move to Eckville that he reportedly came to harbour antisemitic views. “Here was a people who denied everything about Christ, yet they were called the chosen people. That is a contradiction,” he said in an interview with Saturday Night Magazine.