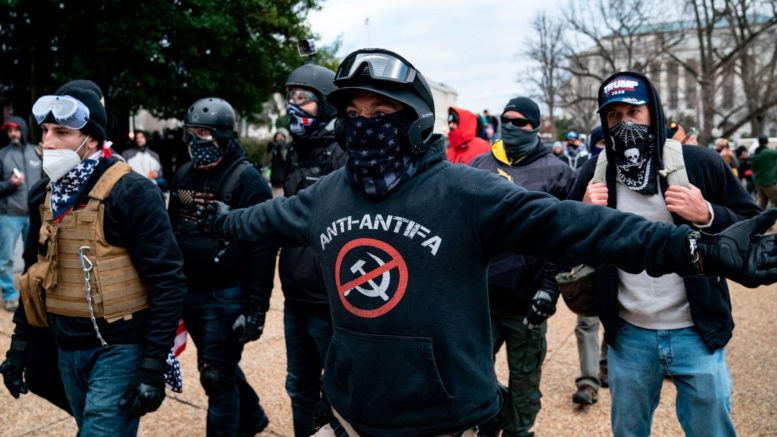 Protesters who claim to be members of the Proud Boys gather with other supporters of President Donald Trump to protest outside the U.S. Capitol, Jan. 6, 2021. (Alex Edelman/AFP via Getty Images)

(Ottawa) – On February 3, the Government of Canada placed 13 new groups on the Criminal Code list of terrorist entities, including four ideologically motivated violent extremist groups:  Atomwaffen Division, the Base, the Proud Boys and Russian Imperial Movement.

“Violent acts of terrorism have no place in Canadian society or abroad. Today’s additions to the Criminal Code list of terrorist entities are an important step in our effort to combat violent extremism in all forms,” stated Minister of Public Safety and Emergency Preparedness Bill Blair.

“Canadians expect their Government to keep them safe and to keep pace with evolving threats and global trends, such as the growing threat of ideologically motivated violent extremism. The Government of Canada will continue to take appropriate actions to counter terrorist threats to Canada, its citizens and its interests around the world.”

All these groups have trafficked to varying degrees in anti-Semitism.

“Terrorist groups operating in Canada are a serious risk to the safety and security of Canadians,” stated Koffler Fogel. “Canada’s Listed Terrorist Entities is an essential tool to counter the threat of violence that groups espousing these toxic ideologies pose to Canadians. Regardless of their ideology, be they Islamist, Neo-Nazi, or White Supremacist, these groups fan the flames of hatred and antisemitism to the detriment of us all.

“We welcome these additions to the list. The Government of Canada’s action enables swifter prosecution of terror suspects while also cutting off the funding to those seeking to foment hate and terror in Canada.”

According to a gov’t press release, “based on their actions, each group meets the legal threshold for listing as set out in the Criminal Code, which requires reasonable grounds to believe that an entity has knowingly participated in or facilitated a terrorist activity, or has knowingly acted on behalf of, at the direction of, or in association with such an entity.”

The Criminal Code mandates severe penalties for people and organizations that deal with property or finances of a listed entity. A listing can also support the denial or revocation of a Canadian organization’s charitable status if it maintains connections to listed entities. Furthermore, persons seeking entry into Canada may be inadmissible if they are found to be associated with a listed entity. A listing also helps to facilitate the removal of an entity’s online content.

“CIJA continues to urge the Federal government to do what is required to protect Canadians from hate, including adding two other organizations to the Listed Terrorist Entities,” added Koffler Fogel. “Those organizations are Samidoun, an opaque Palestinian organization with alleged ties to a currently Listed Entity, the Popular Front for the Liberation of Palestine (PFLP); and, the Iranian Revolutionary Guard Corps (IRGC), a branch of the Iranian armed forces responsible for terrorist acts around the world.

“We will also continue to call on Canada to establish a security rebate program for at-risk communities, equipping law enforcement with the tools to counter hate crime, and enacting policies that counter the proliferation of online hate.”

With these additions, there are now 73 terrorist entities listed under the Criminal Code. In 2019, Canada listed two ideologically motivated violent extremist groups: Blood & Honour and Combat 18.

When an entity is placed on the list, banks and financial institutions freeze its assets. It is a crime to knowingly deal with the assets of a listed entity. Listings also help obstruct assistance from sympathizers and supporters in Canada by criminalizing certain support activities, including those related to terrorist travel, training and recruitment.

The assessments for new terrorist listings are an on-going process. New entities are only added once it has been determined that they meet the legal threshold.

There is also a requirement to review each entity on the list every five years to determine whether it should remain on the list. The following seven entities were recently assessed and it was concluded that they warrant continued listing: Al Qaida in the Arabian Peninsula, Al Qaida in the Indian Subcontinent, Al Shabaab, Islamic State – Khorasan Province, Al-Ashtar Brigades, and Fatemiyoun Division.