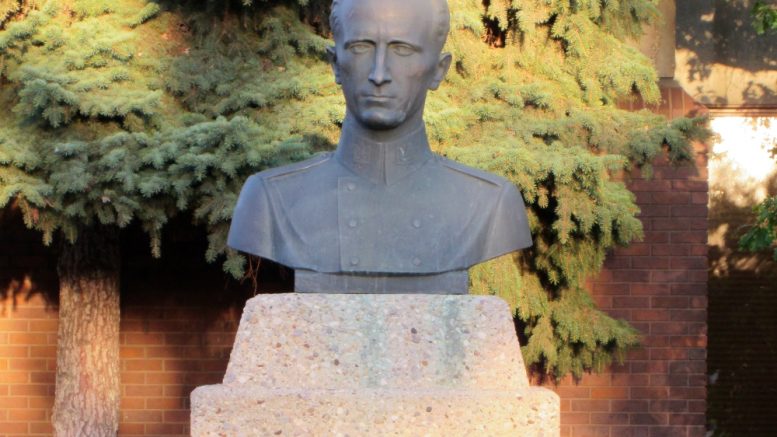 A larger than life bust of Nazi collaborator Roman Shukhevych stands at the entrance of the Ukranian Youth Unity Complex in North Edmonton.

(August 12, 2021) – Friends of Simon Wiesenthal Center (FSWC) is calling for the removal of two monuments honouring Nazi collaborators and war criminals in Edmonton.

One is a statue of Roman Shukhevych, a Ukrainian military leader who collaborated with the Nazis and whose units massacred Jews and Poles between 1941-1944. The second is a memorial to the “freedom fighters” of the SS’ 14th Waffen Division, who carried out massacres of women and children. Both monuments were the target of graffiti this week, with the words “Actual Nazi” written on the statue of Shukhevych and the words “Nazi Monument 14th Waffen SS” written on the memorial.

The statue of Shukhevych sits at the entrance of the Ukrainian Youth Unity Complex in North Edmonton, where it has remained since the complex opened in 1973. The monument to the SS soldiers, which is adorned with flowers and wreaths, sits at North Edmonton’s St. Michael’s Cemetery. FSWC has been advocating for the removal of both monuments for decades, but given this moment of heightened interest in re-examining tributes to historical figures, it is hopeful the property owners will reconsider the value of maintaining the sites.

“It is beyond shameful to have monuments here in Canada honouring Nazi collaborators and war criminals,” said Jaime Kirzner-Roberts, Director of Policy at FSWC.

“These monuments are nothing less than a glorification and celebration of those who actively participated in Holocaust crimes as well the mass murder of Polish civilians. They represent an intolerable affront not just to the Jewish community but to all victims of Nazi horrors, to our veterans who fought and died to defeat the Nazi regime, and to the core Canadian values of tolerance and respect for human rights.”