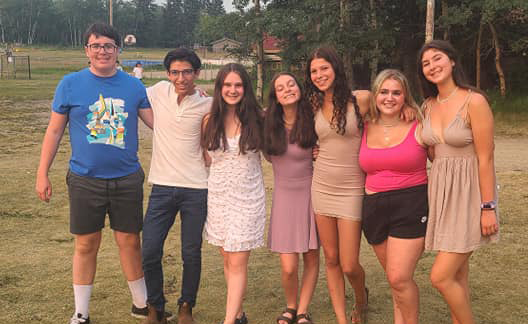 Camp BB-Riback 2021 was a successful Leadership Training program plus the magic of camp.

(AJNews) – While COVID-19 had threatened to shutter a second consecutive season at Camp BB Riback, camp director Stacy Shaikin and his staff were hard at work to ensure that the secret ingredient of the camp’s 65 year success story – youth leading youth – is baked in at the BB-Riback Leadership Training Conference (BBRLTC). The initiative is devoted to developing young leaders while giving them a fun and safe, if altered, camp experience.

The month-long session, which began on July 15, promised to “reignite a new generation” of camp leaders, says Shaikin, who was thrilled to welcome some 35 campers in grades 6 through 12.

The BBRLTC emphasized leadership skills including first aid training and CPR certification.  Other activities include filmmaking, yoga and mindfulness, and most of the usual outdoors activities the camp has to offer.

Shaikin characterizes participants as “a serious group of minds.” Some are tackling high school credit courses over the summer with the full support of the camp. A few will be earning their physical education credits.

Shaikin is excited to be cultivating the talent he sees in this group and is devoted to ensuring that everyone leaves the session with leadership skills and, just as importantly, memories to last a lifetime.

“The 80s and 90s are so vivid for me,” recalls Shaikin of the years when he was a BB camper and staffer.

“I want them to remember these last years together before they go their separate ways,” says Shaikin. “If I could have one more year like that, I’d do it in a heartbeat.”

After studying journalism and building a career with Enmax, Shaikin made his way back to camp as its director in 2018. His wife Nancy – a community paramedic – helps out in the infirmary and their young sons already enjoy being a part of the camp culture.

Shaikin’s assistant director, Jordyn Wright – who is also the camp medic – is studying toward a Bachelor of Science degree in microbiology and immunology at McGill University. Wright, who aspires to become a health care professional, has enjoyed summers at Camp BB-Riback for 12 years. She took an advanced first aid course to qualify as medic and attained her certification as a Red Cross instructor.

“Working as the medic this summer is giving me a unique opportunity to work as a primary healthcare provider and community leader all in one, something that will prepare me for working in healthcare in a way not many people my age will get to do,” says Wright.

Micah Allen, 18, who works closely with Wright on camp COVID-19 protocols and inclusion and mental health initiatives, is studying toward a Bachelor of Science degree in biology at the University of Victoria and also looks forward to a future in health care.

Allen and Wright saw a marvellous opportunity in the “circuit breaker” caused by COVID-19 and have seized the opportunity to deepen the camp’s evolving focus on inclusion and mental health.

“We were really fortunate to work with Between Friends to provide our staff with an inclusion training that focused on accessibility. We also worked with Foothills Academy to learn more about ADHD and Learning Disabilities and how to support every camper better,” Allen said.

Prior to the start of the BBRLTC, Allen and Wright told AJNews that some of their campers would no doubt face challenges reintegrating into camp life after the protracted isolation caused by the pandemic.

“While we hope to provide them a summer of much-needed normalcy, we also anticipate many will need some more care and love this summer. We were incredibly fortunate to have myself and Micah certified as Camp Mental Health Instructors by Let’s Empower, Advocate, and Do (LEAD), Inc. and all our staff will be certified in Camp Mental Health,” Wright told AJNews.

“Teaching something I’m passionate about to our community is a really powerful experience. Our staff this summer are better-equipped than ever to provide empathetic support to anyone who needs it and model proactive self-care,” Wright said.

During the pandemic, Wright volunteered on a peer support hotline at McGill, a process that included 40 hours of training in active listening and mental health support.

“I am grateful that camp has supported me in my certifications and running programs,” Allen told AJNews. “The campers are unique in their own way, which reminds me to always lead with compassion, be adaptable and apply the skills I’ve learned through Between Friends and LEAD.”

Allen, who is part of the team that builds programs for campers in grades six through eight, says camp has played a crucial role in her own development. She is giving back by helping to nurture those who follow her.

“Camp has been a comforting and loving space for me for over 10 years: a place where I experienced personal development as a camper and staff, created life-long friendships, and practiced skills I never would have outside of camp. . . . I can create the changes that I wished I saw as a camper and be a role model to [others]. Camp has formed me into the leader I am today, and continues to provide me with room to grow – away from technology and surrounded by the beautiful nature!”

“The kids who come here are so inspiring – they’re already starting to come into their own, and they are so kind-hearted and bright,” adds Wright.  “As a staff, I’ve seen so much growth in myself and others as leaders, and I’ve been given so many amazing opportunities to step up and shine. To me, camp is a safe space to grow and a place to get away from tech and other distractions in an age of information overload to appreciate the world around us and reflect.”

The camp has clearly instilled a healthy respect for team play in both Wright and Allen, who are quick to praise their colleagues.

“We are so excited to be a part of this unique summer and grateful for the team we have making it happen: programmers, counsellors, kitchen staff, area specialists, and everyone doing work behind the scenes to keep camp running,” they told AJNews.

Shaikin shares their pride in his staff and expressed gratitude for the generous support the camp has had from multiple benefactors.

Michael and Alissia Oshry generously replaced the aging camp office with a better-configured trailer to which decking and a raised roof will be added so that the structure resembles nearby cabins.

While Shaikin had hoped to upgrade the pool area this summer, it proved impossible to access pool liners during the pandemic; at the same time, lumber costs skyrocketed. Significant upgrades to the pool area will happen next season thanks to a generous donation from Lenny and Faigel Shapiro as well as casino proceeds and grants.

Fortunately, much progress had already been made at the waterfront where the Sam Ousher Switzer Charitable Foundation funded a new deck, and dock materials. Volunteers put countless hours into the design and building, including Calgary’s Rob Rothstein, Ryan Rabin and Jacob Kelly and Edmonton’s Cecil Horwitz.

Future plans for the waterfront include an amphitheatre large enough for all campers and staff to participate in Shabbat and Havdalah services and concerts.

Other improvements include a new floor, windows and doors for the camp library, a new stable fence and renovations to the Benjamin cabin, the template for future cabin renovations.

A sign of the times, hand sanitizing stations are now prominent around the camp thanks to the Jewish Federation of Edmonton and the Edmonton Jewish Community Charitable Foundation.

Shaikin says that Calgarian Adam Girvitz’s company –The Exteriors Group – gave the camp an “amazing deal” to reroof two of its most iconic buildings, the Olam and the Chadar. Girvitz, who went out to the camp to supervise the work, goes way back with Shaikin, who was his Wonder Week counsellor when he first attended camp in 1993.

“Camp is my happy place,” Girvitz told AJNews. When his company redid the siding and roof of the Benjamin cabin a couple of years back, he found himself on the path from the village to the Chadar and recalled marching up that pathway with fellow campers for breakfast. “It was the start of many happy days,” recalls Girvitz who snapped and framed a photo of the path because the “great memories” remained so strong.

An addition to the camp that similarly tugs at the heartstrings is a bench at the point overlooking the lake. It was gifted by the family of Debbie and Howie Sniderman in honour of their camp romance some 45 years ago – a powerful testimony to the role camping plays in Jewish continuity.

Camp BB Riback has been a family affair for two and even three generations of some Alberta and Saskatchewan families and welcomes children whose families have moved elsewhere but remain connected to the camp.

The camp opened its gates for family camping earlier this summer, welcoming eight families prior to the BBRLTC session; one family hosted a COVID-safe Bar Mitzvah celebration for 25 family members. BBYO is holding a weekend event at the camp in August.

While it was not possible to conduct the usual summer sessions for younger campers, Camp BB Riback has remained a beehive of activity.  All the while, strict COVID-19 protocols have ensured the safety of campers and staff. Participants in the BBRLTC had to provide proof of at least one COVID-19 immunization and a negative PCR test taken within 72 hours prior to their arrival at the camp. Upon arrival they were given a rapid test, with the process repeated three days later.  Fewer campers were assigned to each cabin and campers were divided into separate pods for programming and meals. As of press time, no COVID cases had been reported at the camp.

Shaikin says he and his staff can’t wait to go “full bore” in the future. They previously welcomed some 260 campers each summer; Shaikin aims to grow that number to 300.

He envisions moving Wonder Week experiences to the second camp session when camp routines are humming and staff-camper ratios are optimal so that first-time campers have better access to everything the camp has to offer. Shaikin says he will also encourage the parents of kids with Autism Spectrum Disorder or other special needs to consider registering their kids for second session when staffers, including highly-skilled inclusion specialists, are in a better position to ensure their best summer ever.

For now, 28 staff members are devoting 100 percent of their efforts toward giving BBRLTC participants a magical summer as they hone the necessary skills to lead, protect and inspire future campers.

“It’s so exciting for us to have campers again this summer,” says Jordyn Wright. “The summers I’ve spent at camp have been so formative for me, and I’m happy we can let kids, who really need it after the last year and a half, have a summer with some normalcy and some of those experiences.”

Be the first to comment on "Camp BB-Riback: Leadership training and so much more"