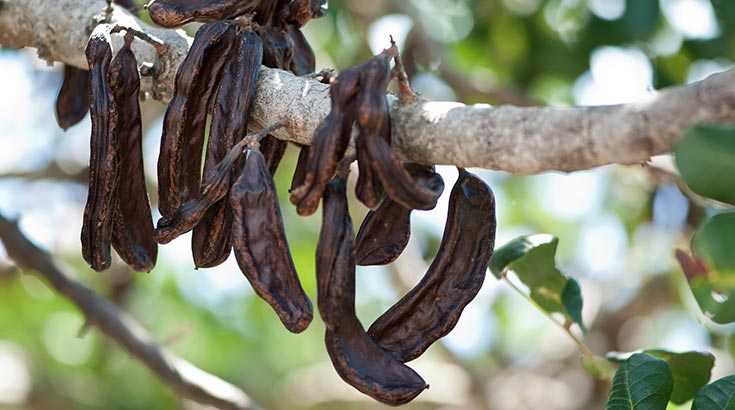 (February 2020) – Back in my elementary school days they used to mark the Fifteenth of Shevaṭ, the “birthday of the trees,” by distributing Israeli fruits. My recollection is quite vague as regards the particular fruits included in the loot bag—but the item that stands out most vividly in my memory was a stiff leathery fruit that repulsed many of us. It was identified as a “bokser”—which I have learned only recently is not an English word, but Yiddish. Its English name “carob” is in fact a transliteration of the Hebrew “kharuv” and cognates in other semitic languages. It might be related to an etymological root meaning “dry.”

Back in my childhood, few of us dared to bite into what was to all appearances a piece of wood. This Rodney Dangerfield of fruits got no respect until a later generation developed carob powder as a healthier substitute for chocolate. Those of us who were impelled to chew the tooth-crushing shells were rewarded with a sweet flavour that had us coming back for more.

Carobs are not mentioned in the Bible, certainly not in Deuteronomy’s definitive listing of “fruits for which the land of Israel is praised.” They do however show up frequently in rabbinic literature.

The carob was generally regarded as a staple for the poor, as exemplified by a tradition about the saintly miracle-worker Ḥanina ben Dosa: “Every day a divine voice issues from Mount Horeb and declared: The entire world is sustained by the merit of my son Ḥanina ben Dosa. And yet a kav of carobs is sufficient to sustain my son Ḥanina for an entire week, from one Friday to the next.”

The same assumption might underlie a detail in the legend about Rabbi Simeon ben Yohai and his son Eleazar who hid from the Romans for thirteen years in a cave where their diet consisted entirely of the fruits of a miraculous carob tree.

Another ancient miracle-worker, Honi ha-Me‘aggel, reacted skeptically to seeing someone planting a carob tree that (as was widely believed) would yield fruit only after seventy years. Honi himself then dozed off for seventy years—and awoke to find the planter’s son enjoying the fruits of his father’s foresightedness.

Like so many everyday items, the lowly carob could serve in the hands of skilled interpreters as a symbol for profound Jewish religious values.

We see this in the famous dispute between Rabbi Eliezer ben Hyrcanus and his colleagues about the “oven of Akhnai,” involving a technical issue of ritual purity. Rabbi Eliezer refused to submit to the majority decision, as was expected in such conflicts. Instead he invoked supernatural confirmation for the correctness of his position. The first of his proofs was when he commanded a carob tree to spring from the earth and transport itself a distance of one hundred (or alternatively, four hundred) cubits. Following a sequence of similar miracles, including a divine voice that explicitly endorsed Rabbi Eliezer’s ruling, Rabbi Joshua countered by citing the words of Deuteronomy, “This commandment which I command thee this day… It is not in heaven”— which he expounded as a bold declaration that, since the Torah was bestowed upon the people of Israel, its authoritative interpretation has been delegated to human sages, and the Almighty no longer interferes in that process.

Later commentators discussed the choice of the carob tree as proof for Rabbi Eliezer’s position.

Rabbi Samuel Edels (“Maharsha”) associated this tale with another well-known discourse about the prevalence of arguments in talmudic culture. That discourse expounded Ecclesiastes’ statement: “The words of the wise are as goads and as nails planted by the masters of assemblies, which are given from one shepherd.” The Talmud applied this verse to the perplexity of Jews who behold the proliferation of controversies among their religious scholars. “Some of those scholars declare a thing pure and others impure”—which leads the students to throw up their hands in despair of ever knowing the correct interpretation. Nevertheless you must accept that all those opinions are legitimate in that their origins can be traced back to “one shepherd.” The Talmud concluded that we must pursue a profound understanding of the arguments that led the disputants to adopt their respective opinions.

In the scriptural text that spoke of the nails being “planted” Rabbi Edels discerned a fitting metaphor for the ideal model of talmudic argumentation. Torah learning was intended to resemble a plant in the sense of propagating numerous ideas and interpretations. Rabbi Eliezer, by making a carob tree bounce from its place, was conveying a symbolic message to his colleagues, as if to say: even though the Torah has granted the majority the authority to make decisions in religious law, that authority must be applied to discourse that resembles a tree, in that it flourishes on the rational exchange of arguments. However as regards the present dispute, Rabbi Eliezer accused his opponents of imposing a tyranny of the majority—analogous to the stagnant carob tree that takes seventy years to produce its fruit.

It was to this charge that the rabbis retorted: You cannot adduce proof from the carob tree. Your stubborn refusal to be swayed by our arguments shows that you, not we, are like the metaphoric carob that remains resistant to productive exchange of views.

A very similar interpretation was proposed by the Maharal of Prague: The slow development of the carob tree makes it an apt symbol for Rabbi Eliezer’s reliance on venerable ancestral tradition, as indicated by his boast that he never taught anything that he had not heard from a teacher. The jumping tree symbolized the transmitting of the received traditions over the generations since the era of prophecy, perhaps since Moses himself.

Against this claim the other sages retorted that we cannot automatically trust the accuracy of received traditions, since they are susceptible to human imperfection and memory lapses. Ultimately they too must be subjected to rational verification.

Indeed, carob fruit is quite sweet if you can get through the tough skin.

Be the first to comment on "From the Sources: Tu B’shevat and Forbidding Fruit"