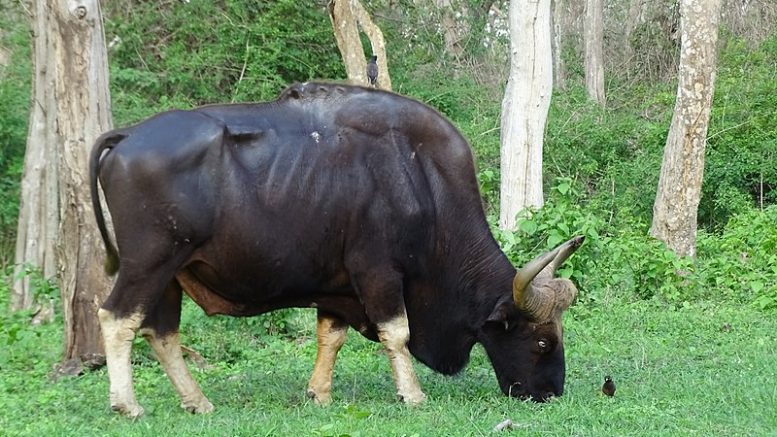 (AJNews) – When the Bible wanted to convey the idea of extraordinary strength, one of its favourite images was an animal called the “re’em.” This creature was particularly notable for the size and might of its horns, as illustrated by Moses’s blessing to Joseph: “his horns are like the horns of re’ems, with them he shall push the people together to the ends of the earth.”

We no longer know exactly what animal the biblical authors had in mind. The most popular candidate for the identification is an animal known as the “aurochs” [= primordial ox]. It was known for its formidable front-facing, contoured horns and its combative personality, but has been extinct since the seventeenth century. The ancient Greek Septuagint translation identified it as “monokeros,” which the King James English Bible rendered literally as “unicorn.”

As was their custom in such matters, the sages of the Talmud and Midrash exaggerated the magnitude of the re’em to, well, biblical proportions. Rabbah bar bar Ḥana, the notorious raconteur of fantastic fish tales, related that he had personally seen a newborn re’em and it was “as large as Mount Tabor,” which the Talmud calculates as forty parasangs (about two hundred kilometers). The rabbis tried to infer from this that it could not have fit inside Noah’s ark, thereby lending support to a theory that the land of Israel had been exempted from the flood. Alternatively, it was suggested that the re’em might have been tethered to the ark and allowed to swim alongside it without actually boarding the craft.

Rabbenu Jacob Tam and the Tosafot school of Talmud commentators analyzed the pertinent passages regarding the identification of the re’em, and observed that “it is not correct when we designate buffaloes as ‘re’em.’ It would appear from this that Jews in twelfth-century France were assigning Hebrew names to their cattle, and that one species was popularly identified as the re’em. This was of course not the bison that roamed the plains of the New World, but rather a species of water buffalo — Rabbenu Tam uses the French term ”buffle”— which were harnessed to perform jobs like pulling wagons and plowing. This in itself would disqualify them from being the re’em since the book of Job asks rhetorically “Will the re’em consent to serve you?”

The buffles also happen to be much smaller than Rabbah bar bar Ḥana’s forty parasangs; and even if we allow that gargantuan sizes of buffalo also existed, normal-sized versions were presumably available for Noah to fit inside his ark, eliminating the need for some of the Talmud’s farfetched interpretations.

Another candidate for the designation “buffalo” was the creature referred to in rabbinic lore as the “wild ox” [shor ha-bar]. The sages of the Mishnah disputed whether it was to be treated as a fundamentally domestic animal that had gone feral or as a wild beast that was subsequently domesticated.

There are several ramifications to this question when it comes to practical Jewish religious law. Notably, according to the Torah the blood of kosher wild animals (such as deer) must be covered with earth or sand after their slaughter, and certain of their fats (ḥelev) may be eaten, unlike those of domestic sheep or cattle. The dispute relates in part to whether or not the wild ox is to be equated (as it evidently was in the ancient Aramaic translation of the Torah) to the species called ״te’o״ that appears in a list of kosher animals in Deuteronomy.

In the eleventh century Rabbenu Hananel of Kairouan, Tunisia, equated the Mishnah’s wild ox with the buffalo and reported in the name of the Babylonian Geonim that its status remained undecided, and we must therefore follow the more stringent implications of both possibilities.

Indeed, medieval Hebrew linguists knew of a dispute between the Babylonian Geonim Saadiah and Hai with reference to the creature known in Arabic as “jamoos” that is generally identified as a buffalo. Rav Saadiah argued that the jamoos is the same as the “m’ri,” a species mentioned in scripture as a sacrificial animal, which means that there can be no doubt about its being a domestic species. Rav Hai, on the other hand, claimed that the word “m’ri” is not a distinct species at all, but an adjective meaning “fattened” that can refer to both cattle and wild beasts. Hence it has no real bearing on the identification of the wild ox.

Rabbenu Hananel’s interpretation was cited by Rabbi Jacob Landau in the fifteenth century; however Rabbi Landau himself dissented from it, citing authorities (like Rabbi Isaiah di Trani) who had equated the wild ox with the domestic m’ri. A prominent expert in talmudic zoology observed that in light of all these sources, the “wild” in the term “wild ox” cannot be understood literally.

Any rabbinic discussion about doubtful domestic / wild classifications will inevitably lead us to the case of the “koi,” a creature that sometimes seems to have been concocted purely in order to fuel talmudic debates. The Jewish sources described it as a creature, likely a bearded gazelle or antelope, whose status was either unknown, inherently indeterminate, or a distinct hybrid of a goat and a deer or gazelle, analogous to the “tragelaphos” or “hircocervus” mentioned in ancient Greek and Latin texts.

It should therefore not surprise us that Rabbi Jacob Weil in fifteenth-century Germany explicitly identified the koi as “what in German is designated a büffel.” He therefore recommended that kois should be slaughtered along with a fowl, regarding which no doubt exists as to the obligation to perform the covering of its blood. In this way it is possible to avoid the recitation of a superfluous blessing.

At the very least we may have stumbled onto the origin of “buffalo wings.”

Be the first to comment on "From the sources: Oh give me a home…"