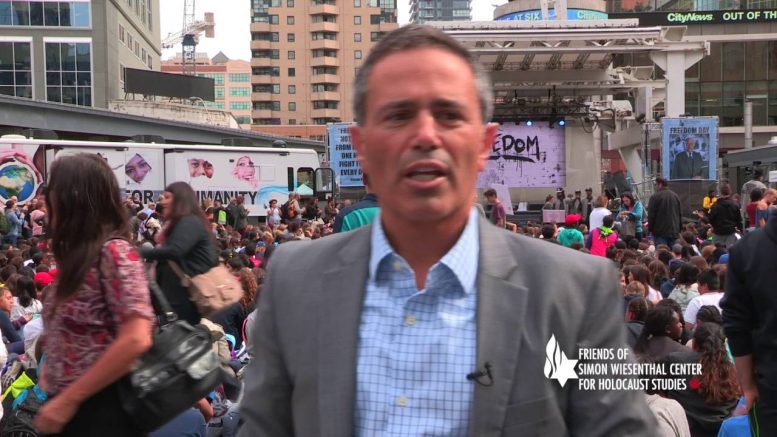 by Avi Benlolo
(June 28, 2019) – As we head into Canada’s 152nd birthday, we cannot be more proud of our contribution to this great nation. We are uniquely Canadian in our approach to empowering and inspiring Canadians to celebrate Canada – every single day! We live in trying times as our country continues to grapple with big questions.

In Quebec, the provincial government passed a controversial bill bringing religious freedom into question; heartfelt revelations through the truth commission have brought forward the important struggles of our First Nations people and among many issues, climate change affects communities through flooding, fires and desertification. As hate speech emerges online and on our streets as a focal point for law and order dampening our beautiful nation, Canadians wonder just where we are headed.

Like any other nation, every decade brings new challenges for Canada. In our “timeline of tolerance” workshops, we remind students of the struggle Canadians endured to achieve human dignity. It’s hard to comprehend that women only got to vote in 1919 – exactly 100 years ago! First Nations people were only given the right to vote in 1960! So, with all the citizenship ceremonies that will be held on our national birthday, let’s remind ourselves about our struggles, our achievements and how much further we still have to go as a nation.

In 2019, it’s incomprehensible to believe that possibly five million Canadians hold antisemitic views, still subject to a cancerous ideology that has proven lethal over history. This rising tide of hate is becoming prevalent in schools as students draw swastikas, refer positively to Hitler and Nazi ideology and mock Jewish students. Hate of this nature is a manifestation of an illness in society – something is wrong. Aside from victimizing the Jewish community, veneration of Nazi ideology is an insult to Canadian soldiers who fought and died valiantly to liberate Europe and defend our country.

Yet, in all this, Canada is a beacon of freedom and democracy. It’s an example for all nations to admire and emulate. We are proud of Canada’s achievements and of our contribution to its national dialogue on critical issues of the day. From the experience of getting to know Canadians from coast to coast, I can say that we are all truly a people who exemplify the very best in humanity.

So it might be cliché, but as we celebrate Canada this weekend, put your feet up with a bottle of beer and tell yourself, “I Am Canadian” and proud of it.

Avi Benlolo is the CEO of Friends of Simon Wiesenthal Centre for Holocaust Studies.

Be the first to comment on "From the Desk of Avi Benlolo: I Am Canadian"