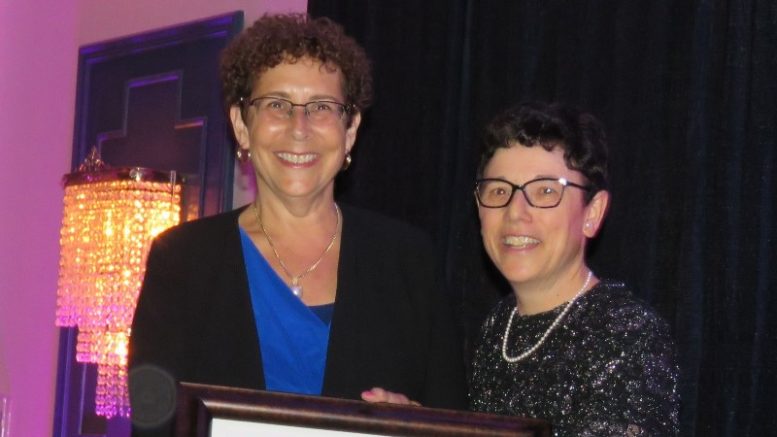 (EJNews) – On June 18, 2019, Edmonton Talmud Torah Judaic Coordinator and teacher Robin Marcus was awarded the Esther and Eric Exton Educational Award in appreciation of her dedication, commitment and outstanding contribution to the educational activities of the Jewish National Fund. It is awarded to the Jewish educator who has most advanced the cause of Israel and Zionistic education in Canada.

The award was presented to Robin by Sharon Bookhalter, President of JNF Edmonton at the JNF Negev Gala.

“In the words of Rabbi Jonathan Sacks, the influence of good teachers stays with us. They are the people who really shape our lives. They are the guardians of our social character,” stated Bookhalter.

“I now have the distinct pleasure of presenting the Esther and Eric Exton Education Award to our very own Robin Marcus for her outstanding work as Judaic Coordinator at Edmonton Talmud Torah School.

“Truly an extraordinary teacher, Robin recognizes that Jewish Education is not complete unless it incorporates the connection of the Jewish people to the land of Israel.

“Devoted in every sense of the word, Robin has caringly taught a generation of students. Imagine that! In appreciation of your dedicated commitment and excellence in Jewish learning, it is my pleasure to present Robin with this esteemed award. Kol Hakavod Robin.”

The Exton Award, first conceived in 1981, was initiated on the occasion of the Jewish National Fund of Canada annual meeting held in Jerusalem on May 2, 1982 in celebration of the Keren Kayemeth li’Israel. Eric Exton, National President of JNF Canada from 1980 to 1982 instituted this award and recognition of the higher value associated with creative Jewish education.