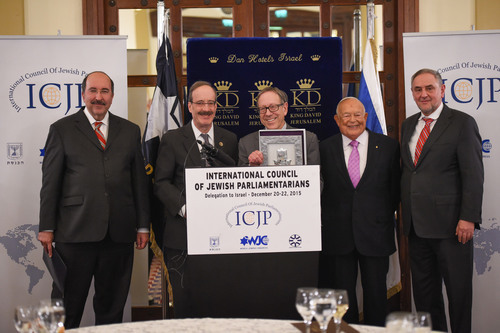 On December 21, ICJP Chairman U.S. Congressman Eliot Engel and Honourary Vice President of the World Jewish Congress Isi Leibler presented a gift of appreciation to Cotler during a former dinner at the King David Hotel. “If one looks to this generation and seeks a role model, that would be Irwin Cotler,” Leibler said.

The ICJP brought 12 Jewish parliamentarians from around the world to the Israeli capital for three days of meetings and briefings with senior Israeli officials and members of Knesset, including opposition leader Isaac Herzog, Minister of Education and Diaspora affairs Naftali Bennett, MK Yair Lapid, MK Michael Oren, and top officials in the Prime Minister’s Office. Delegates to the conference also included MP Anthony Housefather of Canada, Marc Loewenstein of Belgium and Daniel Farcas of Chile.

The ICJP has operated under the auspices of the World Jewish Congress since 2006.

Professor Irwin Cotler is the chairman of the Raoul Wallenberg Centre for Human Rights, an Emeritus professor of Law at McGill University, former Member of Parliament, former minister of justice and attorney general of Canada, and an international human rights lawyer.

An international human rights lawyer, Professor Cotler has served as counsel to prisoners of conscience including Andrei Sakharov and Nathan Sharanksy (former Soviet Union), Nelson Mandela (South Africa) and he was Chair of the International Commission of Inquiry into the fate of Raoul Wallenberg.

He was elected 2014 Canadian Parliamentarian of the Year by his colleagues and recently received the Law Society of Upper Canada’s Inaugural Human Rights Award.

The ICJP delegation to Jerusalem, led by Chairman U.S. Congressman Eliot Engel, comprises twelve parliamentarians, from Chile, Brazil, Canada, the U.S., Belgium, France, Romania, Hungary and Ukraine. The meeting, organized in coordination with the Knesset and the Ministry of Foreign Affairs, opened at the King David Hotel with an introductory session, followed by a formal dinner at the Knesset.

At the formal dinner, Knesset Speaker Yuli Edelstein welcomed the parliamentarians, as well as distinguished ambassadors to the State of Israel. Relating to the recent tensions and terrorist attacks in Europe, Edelstein said: “What I wish to all of the democracies who are facing the same problem [Israel has faced] is to find the balance between running a democracy that is as perfect as one thinks, without letting terrorists use the rules of the democratic game to challenge that democracy.”

World Jewish Congress CEO Robert Singer thanked Edelstein for hosting the delegation, telling the parliamentarians: “You, honourable legislators, are the elected representatives of your countries. You were not elevated to public service by virtue of your religious and cultural affinity, but I have no doubt that your Jewish moral values deeply affect the choices you make as public servants.”

“At the World Jewish Congress, we believe it is crucial to bring together lawmakers who share many concerns and who otherwise would perhaps never meet. You are a powerful group of people, who have the ability to make real change in the world. Together, you are even stronger than you are alone,” Singer added.

In his remarks to the parliamentarians and to the guests at the dinner, Engel related to the recent wave of terror and the threats of radical Islam, saying: “When you consider all these threats, it’s clear why Israel’s friendships and alliances are so important.  With the United States, the EU, other countries, in South America, and the global Jewish Diaspora. For the United States, Israel is a natural ally – the only democracy in the Middle East.  We must never forget that.  It is a country that shares our values that we share here in the United States and our commitment to democracy.”

“And let me just say this: anyone who claims that our relationship is in danger or that support for Israel in the United States is waning simply doesn’t have their facts straight,” Engel added. “Support for Israel is bipartisan, unshakable, and will remain so.  It transcends any particular president or prime minister, any members of Congress or the Knesset.” 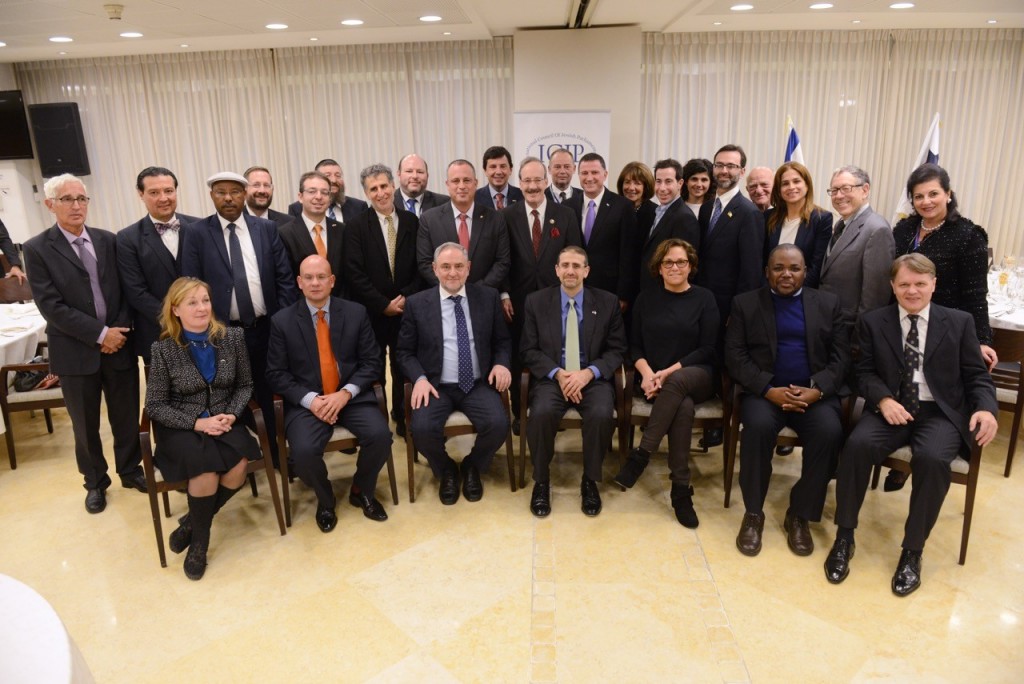 Members of the International Council of Jewish Parliamentarians convene in Jerusalem December 21, 2015 for three days of meetings.

Be the first to comment on "Former Canadian Justice Min. Irwin Cotler honoured by World Jewish Congress, ICJP in Jerusalem"