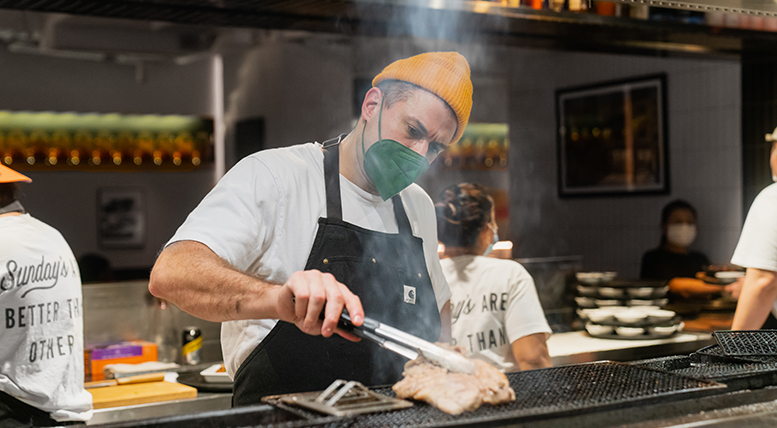 (AJNews) – Alas, there are no Michelin Star restaurants in Alberta.  But we can kvell at the fact that former Calgarian Matt Abergel’s restaurant, Yardbird Hong Kong, has garnered its first.

It came as a surprise to Abergel, who modestly says that the Yardbird Hong Kong team was just doing what they’ve always done when they got the unanticipated but happy news.  It is a shot in the arm during a pandemic that has decimated many restaurants, leaving even highly successful ventures like Yardbird Hong Kong struggling to stay afloat in a sea of ever-changing public health restrictions. 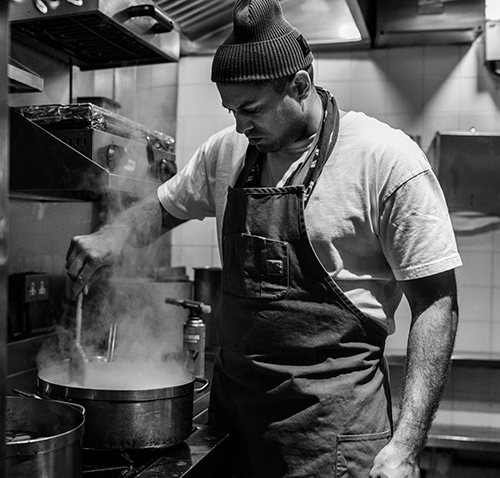 Matt Abergel – an action shot – in the kitchen of his restaurant in Hong Kong.

No stranger to accolades, Abergel and his business partner, Lindsay Jang, formerly of Sherwood Park, Alberta, opened Yardbird Hong Kong nearly a decade ago.  It is a foodie paradise where a Japanese favourite, chicken yakitori, reigns supreme.  Abergel and Jang opened their second restaurant, Ronin – named for their son – eight years ago.  Their own whiskey brand, Sundays, is named for their daughter.

While talk of Michelin Stars usually conjures visions of white tablecloths and multiple dollar signs, Yardbird Hong Kong is a casual, friendly Izakaya with a cool vibe that, prior to the pandemic, saw long lines of people waiting to be seated.  Ronin – which, like Yardbird Hong Kong, has appeared on San Pellegrino’s list of Asia’s 50 Best Restaurants – specializes in seafood and whiskey.

How did a Jewish kid from Calgary with no formal training become a chef’s chef in Hong Kong?  That is a recipe with multiple ingredients.  The chicken soup and crispy-skinned Cornish game hens lovingly cooked by his late grandmother, Bertha Gold, were early influences, says Abergel, as were family dinners over Chinese and Vietnamese food and episodes of the Iron Chef.  On his paternal side, Abergel is the inheritor of culinary traditions from Morocco and Israel, where a grill’s a thrill.

Abergel worked in restaurants as a teen in order to earn pocket money, says his mother, Bonny Gold-Babins, but she never imagined he would end up in the food industry.

“Matt is an amazing artist.” Gold-Babins told Alberta Jewish News. “We encouraged him to study art.”

That talent is apparent in many details at Yardbird Hong Kong, says Gold-Babins, adding that Abergel designed the tables and chairs that tie together the industrial décor of the restaurant.

Abergel – who attended The Calgary Jewish Academy and spent some summers at Camp Hatikvah and Camp BB Riback (the latter as staff) – credits his years of skateboarding as formative when it comes to his philosophy and management style.  While working at The Source, a Calgary snowboard and skateboard shop, he learned that it was possible to run a business while, at the same time forming a community.

“It was a place where you could be yourself while sharing a common interest and sense of purpose,” Abergel recalled.

The Source was where Abergel and Jang first met.  While they are no longer romantically involved, they remain business partners and best friends as they continue to co-parent their growing children, Abergel said.

Following his graduation from Henry Wise Wood High School, Abergel traveled extensively in Japan and Korea.  Later, he moved to Vancouver, where he cut his teeth working at Japanese restaurants.

Then it was onward to New York City where Jang was already living.

“That’s where I found my master,” says Abergel, who apprenticed with Masa (Masayoshi Takayama), an acclaimed Japanese Chef and restauranteur.

Twelve years ago, Abergel and Jang moved to Hong Kong where he worked in a corporate restaurant for a couple of years before he and Jang decided it was time to open a restaurant of their own. Yardbird Hong Kong was born with Abergel bringing his talents to the kitchen and Jang focusing hers on management.

Earning favourable buzz from the start, Yardbird Hong Kong received a major boost with an effusive 2019 review in the New York Times that referred to the restaurant as “ . . . one of the most popular and influential restaurants in Hong Kong.” Abergel told Alberta Jewish News that the review was a “game changer” for his restaurant, distinguishing it from thousands of others in a culinary crossroads that knows from good food.

“Hong Kong is quite a revolving door of people,” says Abergel.  “There’s all sorts of good stuff happening. It’s a great city.”

With the outbreak of COVID-19 in nearby Wuhan, China, and its subsequent spread, the restaurant industry suffered a downward spiral that began during what would have typically been a peak period in Hong Kong – the lunar New Year in 2020.

The pandemic hit while Abergel and Jang were looking forward to the opening of a third restaurant, this time in Los Angeles, for which they had already leased space.

It didn’t come to pass, says Abergel, as they focused on “. . . trying to keep our current businesses alive and kicking.”

“[COVID] almost destroyed us multiple times, but it’s up and down,” says Abergel.  “Rolling open and close has been the hardest part.”

For a while, Yardbird Hong Kong and Ronin were closed for in-person dining but open for takeout.  Both restaurants recently re-opened for dinner after a hiatus of nearly two and a half months, while bars and nightclubs remain shuttered.

Despite the slings and arrows of public health measures and intermittent closures, Abergel expresses feelings of gratitude.

“We are lucky.  We feel blessed for sure.”

What does the future hold for Matt Abergel?

“It is a waste of energy to think of next,” says Abergel.  “We don’t know where the world is going.”

This June will mark the 10th anniversary of Yardbird Hong Kong and, according to the restaurant’s website, there will be special collaborations and drops.

Ever humble in the face of his accomplishments (even Abergel’s mother usually hears about her son’s achievements second-hand), Abergel acknowledges that the Michelin Star is good for business; it puts Yardbird Hong Kong on the radar of a new demographic of diners that might not, otherwise, find their way to Wing Lok Street. This bodes well for a resurgence of business as the pandemic recedes.

Another thing Abergel looks forward to is some badly needed R & R.  He’d like to return to Japan for a vacation and to Calgary to visit family.

Bonny Gold-Babins and her husband, Eric Babins, look forward to that visit, having missed their usual routine of frequent visits with their children and grandchildren in Calgary and in Hong Kong.  At the moment, they are eagerly awaiting the return from Hong Kong of their daughter, Tara, and son-in-law, Tyler Huang-Bobrowski.  The recently-wed couple met while Tara was working for her big brother, managing front of house and communications at Yardbird Hong Kong and Ronin.

Now that Albertans are getting COVID immunizations, those who have been craving travel – and have a yen for Yakitori – may soon be able to add Hong Kong and Yardbird Hong Kong to their itinerary.

If you plan to travel only as far as your kitchen, the next best thing is to check out Abergel’s cookbook, Chicken and Charcoal: Yakitori, Yardbird, Hong Kong, winner of a 2019 James Beard Foundation Book Award. It may not contain the secret to Bubbie Bertha’s Cornish game hens, but her legacy lives on in the culinary art of her grandson – Hong Kong’s toast of the town – Chef Matt Abergel.