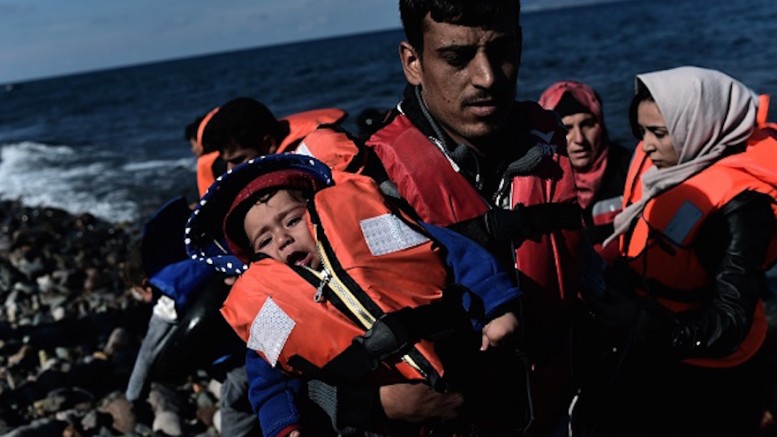 Refugees and migrants arrive on the Greek island of Lesbos, on October 29, 2015, after crossing the Aegean sea from Turkey. At least five migrants including three children, died on October 29, 2015 after four boats sank between Turkey and Greece, as rescue workers searched the sea for dozens more, the Greek coastguard said. The new accidents brought to 34 the number of migrants found dead in Greek waters this month, according to an AFP tally based on data from Greek port police. Since the start of the year, 560,000 migrants and refugees have arrived in Greece by sea, out of over 700,000 who have reached Europe via the Mediterranean, according to the International Office for Migration (IOM). AFP PHOTO / ARIS MESSINIS (Photo credit should read ARIS MESSINIS/AFP/Getty Images)

WASHINGTON (JTA) – American Jewish organizations don’t see the Syrian refugees as a threat; they see them as a reminder.

With rare unanimity on an issue that has stirred partisan passion, a cross-section of the community has defended the Obama administration’s refugee policy in terms recalling the plight of Jews fleeing Nazi Europe who were refused entry into the United States.

“The Jewish community has an important perspective on this debate,” the Orthodox Union said in its statement. “Just a few decades ago, refugees from the terror and violence in Hitler’s Europe sought refuge in the United States and were turned away due to suspicions about their nationality.”

Echoed the Conservative movement’s Rabbinical Assembly: “We can sadly remember all too well the Jews who were turned away when they sought refuge in the United States on the eve of, and during, World War II.”

Eleven Jewish organizations joined another 70 groups in pleading with Congress to keep open the Obama administration’s program, which would allow in 10,000 refugees over the next year from among the 200,000 to 300,000 in Europe. Neither the Orthodox Union nor the Rabbinical Assembly signed the letter.

Among the signatories were mainstream bodies like the the Reform movement, the Anti-Defamation League, the American Jewish Committee and the National Council of Jewish Women, as well as HIAS, the lead Jewish body dealing with immigration issues, and the Jewish Council for Public Affairs, the umbrella body for Jewish public policy groups.

However, the parallels to the Nazi era raised hackles among some conservatives.

“The refugees from Syria are not fleeing a genocide, it’s a civil war,” said Matt Brooks, who directs the Republican Jewish Coalition.

Officials from the organizations that support allowing in the refugees said they were not likening the magnitudes of the two catastrophes, but could not help noting the reluctance in the 1930s, as now, to accept refugees and the accusations that the refugees posed a danger.

The consensus among the three major streams of U.S. Jewry – Reform, Conservative and Orthodox – is derived from a shared understanding of Jewish scripture, said Rabbi Jonah Pesner, who directs the Reform movement’s Religious Action Center.

“Our role is to be the pure rabbinic voice that lifts people up beyond their narrow partisan views,” he said of rabbis.

Rabbi Steve Gutow, a Reconstructionist who is the outgoing president of the Jewish Council for Public Affairs, said sympathy for the refugee was written into the Jewish cultural genetic code.

“We’ve been facing the need to have refuge since we left Egypt,” he said. “To think about not speaking out flies in the face of who we are.”

There is not 100 percent agreement: The president of the Zionist Organization of America, Morton Klein, for one, spoke against allowing in the refugees at his group’s annual dinner in New York this week.

Still, the overwhelming consensus lines up the Jewish organizational world against the Republican Party.

A GOP-backed bill that would pause the refugee program passed overwhelmingly in the U.S. House of Representatives last week and virtually every Republican governor has said they do not want to allow in the refugees. At the same time, almost all of the Republican presidential candidates want it paused, if not reversed.

There appears to be popular opposition to the resettlement as well. An ABC/Washington Post poll showed 54 percent of Americans oppose accepting refugees, while 43 percent support it. The margin of error was 3.5 percentage points.

Being on the losing side of a political debate is nothing new for organizational American Jewry, said the ADL’s CEO, Jonathan Greenblatt, noting that the ADL in 1958 solicited a book from a “young senator from Massachusetts” — John F. Kennedy — to counter rising anti-immigrant sentiment. The future president wrote and published “A Nation of Immigrants.”

“‘We were once strangers’ is core to our identity,” Greenblatt said.

There are signs that support for the refugees may not always be a partisan one.

The U.S. Holocaust Memorial Museum, which has a rigorously bipartisan board, has weighed in backing the program. And Michael Chertoff, President George W. Bush’s secretary of Homeland Security, who is Jewish and otherwise has been sharply critical of the Obama administration, joined his Democratic successor, Janet Napolitano, in urging Obama to safeguard the resettlement program, describing the current screening program as “robust.”

Jen Smyers, the director of advocacy for Church World Service, one of several groups involved in refugee advocacy and resettlement, said she expected more Republican backing for the refugees once grassroots activists contact their representatives during the Thanksgiving break.

“This is a powerful week to be in touch,” she said, referring to the holiday commemorating refuge.

Daveed Gartenstein-Ross, a senior fellow at the Foundation for Defense of Democracies, told JTA that the key to winning over conservatives and Republicans was to take their concerns seriously, which he said the Obama administration had failed to do. Gartenstein-Ross said President Barack Obama was wrong-footed, for instance, in deriding GOP presidential candidates as “scared of widows and orphans.”

“Part of being president is you don’t debate against the lowest common denominator on the other side,” he said.

Be the first to comment on "For Jewish groups, Syrian refugees are a reminder – not a threat"