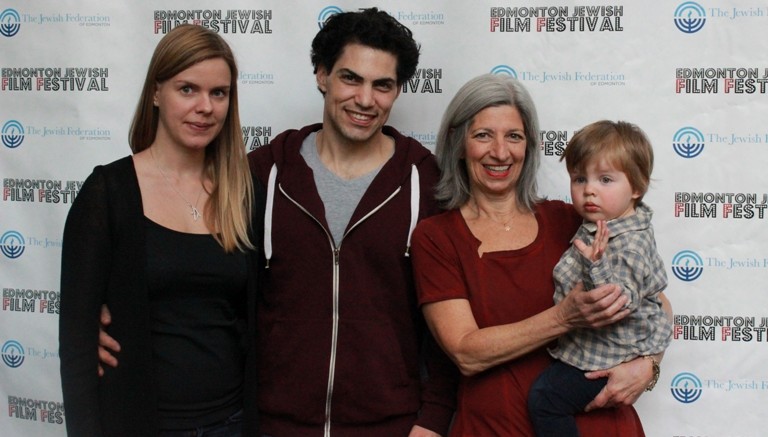 Some members of Earl Parker's family were in attendance at the Edmonton Jewish Film Festival: Asia, Sean, Reeva and Adam Parker. (Photo by JFED)

– This year’s Edmonton Jewish Film Festival began with class and glamour. A rolled out red carpet welcomed eager guests to an event that would offer them a rare opportunity to experience something different. They would learn a story unknown to many, meet a well-established Hollywood director and be honoured with the presence of the family members of those who fought in Israel’s War of Independence in 1948.

Before the screening of the Film Festival’s first film, a very special announcement was made introducing a new initiative, the Earl Parker Award for Jewish Film. Bestowed by an anonymous donor in honour of the late Earl Parker z”l, the purpose of the award is to foster Jewish cinema in Edmonton.

Earl who passed away on September 7, 2014 was an active and generous member of Edmonton’s Jewish community.  He graduated from law school in 1975 and moved to Edmonton where he began his career at the firm Shtabsky & Co. He joined Witten LLP in 1984 and was appointed Queen’s Counsel in 2003.

Earl loved the practice of law. He practiced mainly business law but was knowledgeable in many other areas. He had an encyclopedic knowledge of many topics including mathematics, science, history, and more. Earl was a trusted, loyal friend and devoted husband and father. He was kind, generous and had a keen sense of humour and he encouraged young people to pursue their dreams.

“Earl passed away quite suddenly this year and I think it really affected a lot of people and they wanted to honour him in some way through the film festival,” said Debby Shoctor, CEO of the Jewish Federation of Edmonton.

“We are really touched that Earl is being honoured in this way,” said his wife, Reeva Parker. 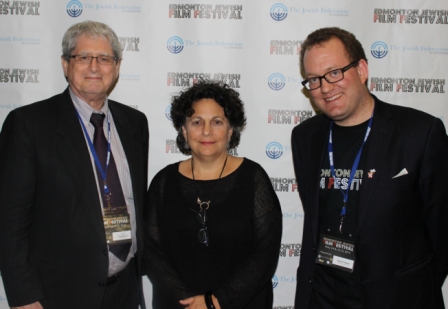 Once the award was announced, the festival began with its opener: a documentary entitled “Above and Beyond.” This film tells the story of foreign volunteers, called Machalnicks, who went to Israel to fight in the 1948 War. Many of these volunteers were WW2 fighter pilots veterans who later came to serve in the Israeli air force. Though the film did not directly feature Machal soldiers from Alberta, it did ensure that their presence would be known. Mark Joffe’s father, Yale Joffe, was one of them.

“I’m very proud. Some of my father’s photos were actually used in the making of the film, so it has a personal family connection,” Joffe said, adding that it was an important story to tell because of the sheer number of volunteers who were involved.

Mark Joffe’s attendance was not an accident; he and his family were invited. Festival chair Sam Koplowitz felt it was important to recognize as many local Machalnicks as possible.

“It’s rare that a film of this calibre includes people who would be closely related to us. We thought it would add to the warmth of our event. I think people were quite thrilled. It brought a real sense of accomplishment and pride in being closely related to those events,” said Koplowicz.

Once the Machalnicks were acknowledged, attendees were given the chance to quench their curiosity by asking questions from the film’s director, Roberta Grossman. She spoke of the high production value of her film and her motivations for making it. Ultimately, the goal was to elicit a sense of pride in her viewers.

“I think it’s very hard these days for people to have an unabashed great feeling about Israel. The story has become more and more complicated all the time. I hope that people can remember that feeling of why the state was established, why it was so important, and the motivation behind it. To just feel a sense of unmitigated pride in the way the state was formed and how much sacrifice went into it and the part that Jews from all over the world played in helping the state to get on its feet,” Grossman elaborated.

Audience reception to the opening film was extremely positive and it served as an excellent kick off to a wonderful 2015 Edmonton Jewish Film Festival.

Following the screening of the last film, Festival coordinator Daniel Larson said the event had been a huge success. He praised the Landmark Cinemas in City Centre Edmonton as a great festival venue and thanked the wonderful hard working team of volunteers.

He said, “With the 2015 Edmonton Jewish Film Festival recently wrapped up, we want to thank all of our sponsors, supporters and attendees who came out to support the festival. It was a great success with 10 films screened over six days. See you next spring at the 2016 festival!”