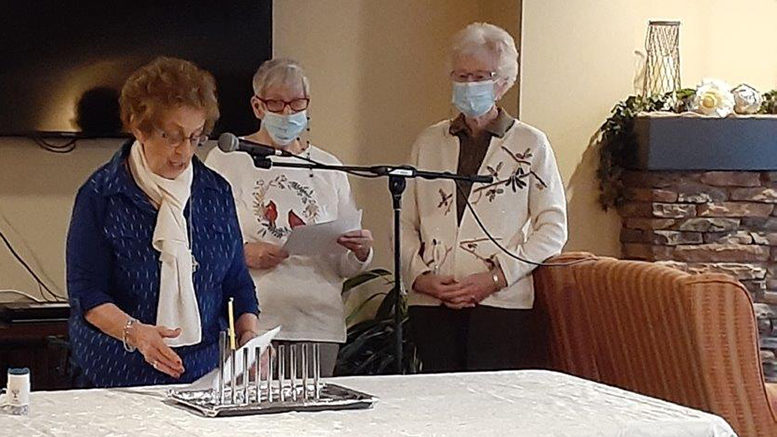 (AJNews) – She may be the only Jewish resident at Calgary’s Manor Village at Signature Park, but Erica Karabus is enjoying a festive Chanukah this year due, in large part, to the kindness of fellow residents Ann Kennedy and Carol Fraser who have chosen to honour their neighbour’s traditions in the midst of ubiquitous Christmas celebrations.

Kennedy went the extra mile when she realized that Karabus would not be able to celebrate Chanukah with her children and grandchildren due to COVID-19 restrictions. 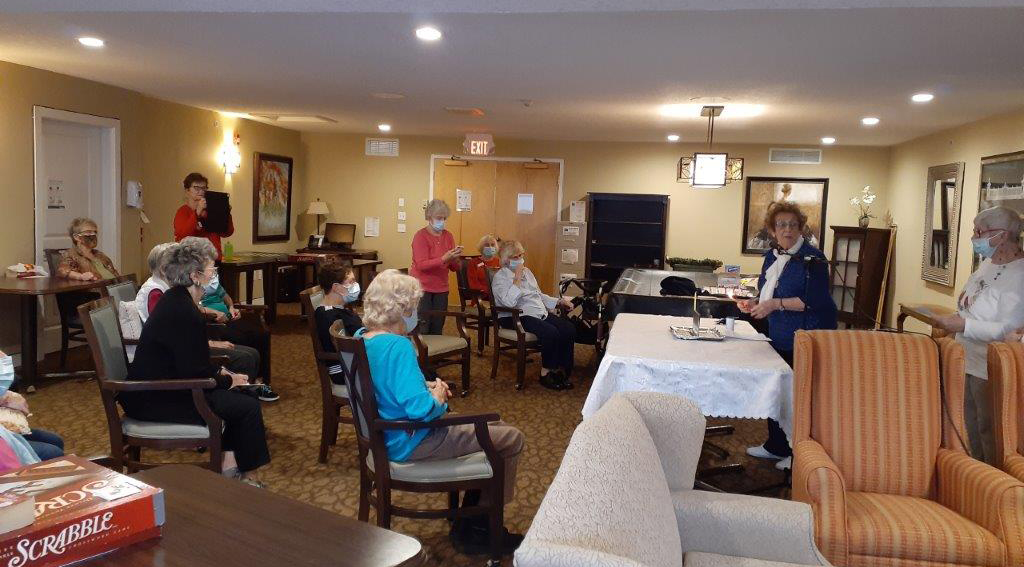 Erica Karabus lights the Chanukah candles at Manor Village at Signature Park in Calgary and explains the significance of the holiday to fellow residents.

“The building is decorated so much for Christmas,” Kennedy told Alberta Jewish News. “It’s all Christian or commercial symbolism . . . . It seemed to me we should celebrate the Jewish traditions because we have a Jewish person in our midst.”

Kennedy’s search for a Chanukiah led her to the gift shop at Beth Tzedec Synagogue.  At the time, she was not aware that Karabus is a member of the congregation.

The Synagogue’s senior management team was moved by Kennedy’s quest and chose to emulate her kindness, gifting The Manor with a beautiful Chanukiah, candles and dreidels that Kennedy hopes will be used by the seniors’ residence for years to come.

When Kennedy returned with the Chanukah paraphernalia, a holiday social was taking place at the Manor, complete with Christmas cookies and eggnog. She seized the moment to display the Chanukah items and to let fellow residents know that Karabus would be speaking about her holiday and leading candle lightings on the first and last nights of the festival.

“Given the interest, there are far more than 15 people who want to be there,” Kennedy told AJNews.

Unfortunately, due to COVID protocols, the candle lightings were capped at 15.

“It made me feel very good,” said Karabus, who is open about her religious practices including efforts to maintain at least some aspects of kashrut while dining in her communal setting. That choice is supported by the Manor’s chef who regularly meets with Karabus to discuss upcoming menus.

“It is absolutely wonderful that the residents of The Manor care so much about Erica and want to acknowledge her holiday in the spirit of inclusion,” said Cantor Russell Jayne.

“Her observances are being treated with the respect and dignity they deserve,” added the Cantor, who was thrilled to use his discretionary fund to give the Chanukah gift to The Manor.

Cantor Jayne often supports and participates in Jewish activities for seniors at the Trinity Lodge. 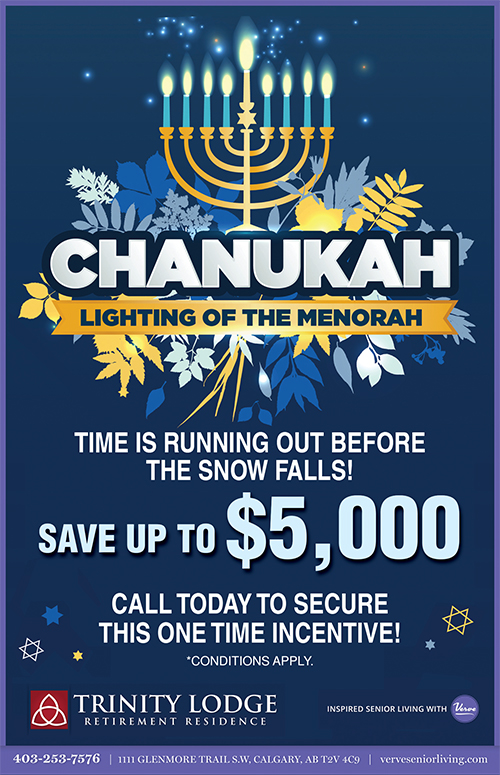 “It is frustrating that we can’t get together as we usually do,” said the Cantor who added that the next best thing has been to support the efforts of seniors’ homes so that they can assist residents in their religious observances.

Trinity Marketing Director Val Bracey says residents miss the Cantor whose visits have had to be postponed due to increased COVID precautions.

There will be a Chanukah dinner for all Trinity residents featuring brisket and latkes.  Past years have included a special dinner for Jewish residents and their family members but that activity has also been curtailed due to the pandemic.

An electric menorah will be lit in the lobby of the Trinity each afternoon during the holiday with the prayers recited by residents Jack Adler and Shirley Goldberg.

“There won’t be any singing,” said Val Bracey.  “Normally this is a very vibrant place, but we are really trying to hold back.”

The Trinity Lodge recently came out of a lockdown after one staff member tested positive for COVID-19.  Fortunately, there was no further transmission.

Trinity Chaplain Bart Dailley has made an extra effort to brighten the holiday, sending Chanukah cards to each Jewish resident, Bracey said.

At Our Parents Home in Edmonton, recreational therapist Natalie Voegli and her colleagues are dedicated to ensuring that all residents are able to enjoy as many of the customs and flavours of the season as possible. 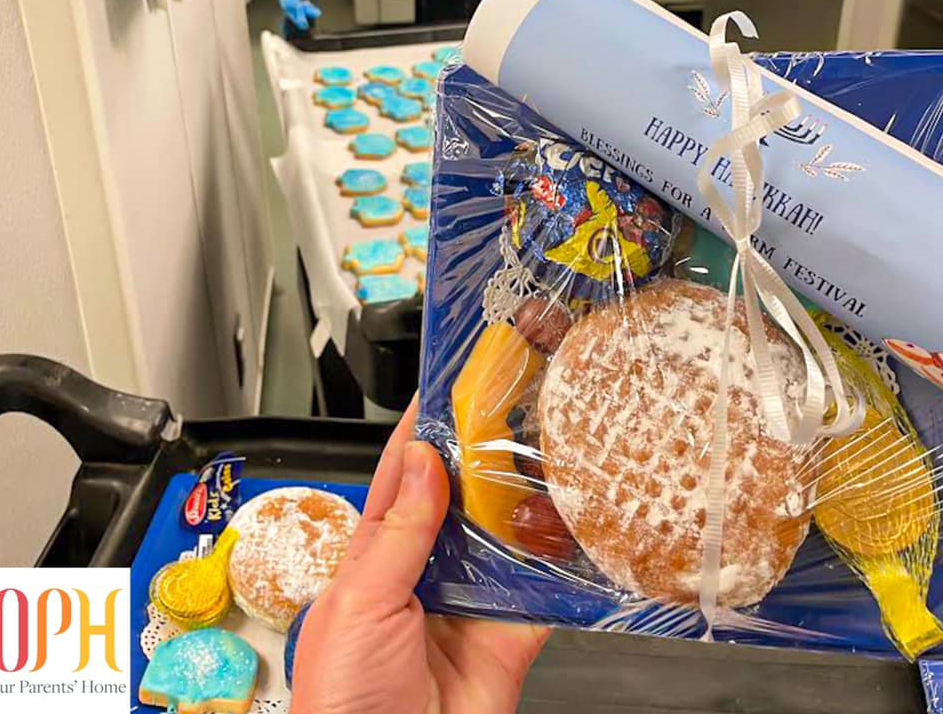 A candle lighting takes place in the OPH lobby every afternoon at 4:30pm throughout the holiday, with safe distancing and other COVID protocols in effect. Other Chanukah festivities include a dinner with latkes, and dreidel crafts for memory care residents.

“As the recreation therapist, I want to provide some normalcy for all our residents throughout the holidays,” said Natalie Voegeli adding that whatever holiday they celebrate, residents are receiving customized gifts and treats.

Back in Calgary at The Manor at Signature Park, Erica Karabus does not have other Jewish residents with whom to celebrate. But she is not alone.  Ann Kennedy and Carol Fraser join Karabus in her candle lighting, reciting the English translations after she chants the traditional Hebrew prayers. Chanukah 5781 is proving both fun and memorable as together they kindle an appreciation of the Jewish reasons for the season by bringing others into their circle of friendship and light.