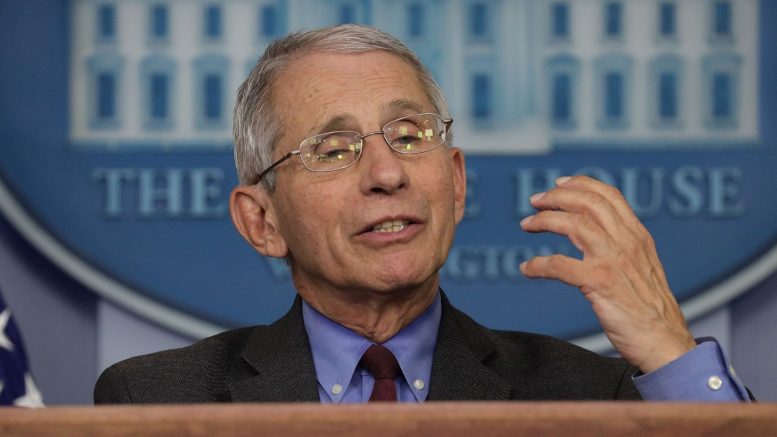 “The kind of social interactions which is the core of the beauty of your culture has unfortunately led to a higher risk,” Fauci said Thursday in a webcast organized by the Orthodox Union.

He encouraged the people on the call to take baby steps toward reestablishing in-person prayer.

“If you said, for the time being, ‘How about once a day and five days a week as opposed to three times a day, seven days a week,’ if you could phase that part in,” that would be a good idea, Fauci said. He added, “I don’t want to be presumptuous to know what that would mean to you from a spiritual standpoint.”

Synagogues across the country have been closed since mid-March, when states shuttered houses of worship and other gathering places in an effort to curb the spread of the disease. While some synagogues have begun holding services online, that practice is not compatible with Orthodox practices, so Orthodox Jews have not prayed together in months.

Now, as some state and local governments begin relaxing restrictions, it may become legally permissible to hold communal services again — though synagogue leaders have yet to take advantage of the right to open.

Rabbi Moshe Hauer, the Orthodox Union’s executive vice president, told Fauci that his organization was advising congregations to wait two weeks past government opening dates to start returning to congregational prayer, to designate seats to make sure congregants sit apart and to stagger services to keep entry into the synagogues compatible with social distancing.

Fauci also advised congregations to consider the intensity of the pandemic in their region, noting that deaths have yet to plateau in New York City and Chicago, where there are high Jewish concentrations. He advised not allowing older adults and those with underlying conditions such as obesity, diabetes and hypertension to return to services until the healthy have been in place for two weeks.

“As tough as it sounds, I have family members in the same boat, you’ve got to make sure that they are really protected,” Fauci said.

He also said the risk was likely to carry over into the High Holidays this fall, and that pandemic risk mitigation should continue to apply to worship at that time.

“As we get to the fall, there will almost certainly be virus,” he said.

Fauci has been seen by many as the voice of reason during the pandemic, issuing straightforward advice that has persuaded Americans to take precautions and limit the virus’ spread. He has said the long hours of the pandemic response have been exhausting.

“As you’re doing your praying, make sure you include me in that,” Fauci said on the call.

Hauer assured him he was. Hauer also told Fauci that the Orthodox Union was advising congregants to keep 8 feet apart because “it will end up being 6 feet,” the recommended distance for safe interaction, because Jews cannot resist socializing.

“The emotional core of the Jewish people of being warm and close to each other, you can’t resist!” he said.

Be the first to comment on "Fauci to Orthodox Jews: Ease into communal prayer as gatherings become possible"