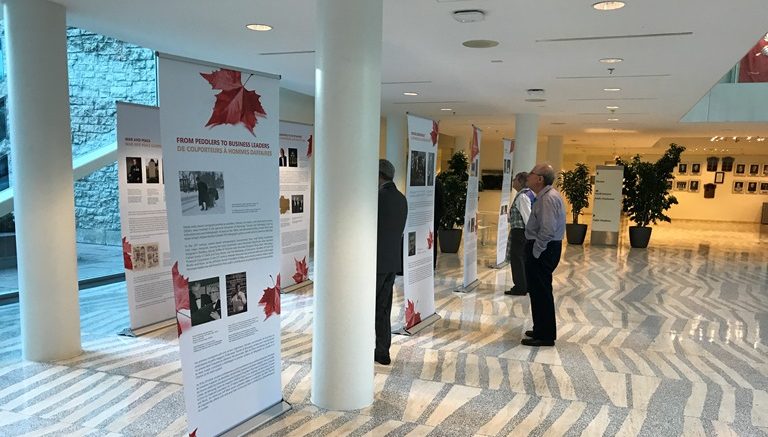 The Jewish contribution to Canada during its first 150 years is being celebrated this month at Edmonton City Hall with a special exhibit 'The Canadian Jewish Experience: A tribute to Canada 150. The exhibit is sponsored by Jewish Federation of Edmonton and Jewish Archives and Historical Society of Edmonton and will be on display until October 31, 2017.

(October 2017) – The Jewish contribution to Canada during its first 150 years is being celebrated this month at Edmonton City Hall. The exhibit will be on display for the month of October, and the opening reception was held on October 2.

A series of nine panels, covering all facets of Jewish involvement through those many decades, is part of a nationwide exhibit coinciding with the country’s 150th birthday celebrations. The exhibit is being hosted in Edmonton by the Jewish Federation of Edmonton and the Jewish Archives and Historical Society of Edmonton and Northern Alberta.

And it is a former Edmontonian, Sandra Morton Weizman, who has helped spearhead the national project by assembling and curating the entire bilingual display, highlighting how Jewish Canadians have contributed to the fabric of the land since Confederation.

Deciding what to include and what to leave out was a very difficult task for Weizman, although the process itself became a labour of love for the Calgary woman, who has worked as a successful museum curator for many years.

“There is only so much you can say in nine panels; there are so many stories about so many people,” she says.

The original exhibit opened in Ottawa in early April and, rather than transporting the panels across the country and limiting their accessibility, replicas were produced so that a total of 10 major cities will be able to display the works, entitled The Canadian Jewish Experience: A Tribute to Canada 150.

In Edmonton, the exhibit opened first at the Beth Israel Synagogue on July 1, before being moved to the Beth Shalom for Doors Open Edmonton, then to Heritage Days in August, to the Edmonton Talmud Torah for the month of September, and now to the atrium of City Hall on Monday, where it will remain on display for the month. It is expected that a more permanent home will be found afterwards.

Weizman’s work as a curator and consultant has included a stint as senior curator of cultural history at the Glenbow Museum. Although Jewish history has not been her exclusive area of expertise. it is one for which she has become nationally well-known.

In addition to work on the display, Weizman was also heavily involved in putting together a complementary website, which allowed her to include more detail on the Jewish history in this country. Those who are interested can check it out at www.cje2017.com.