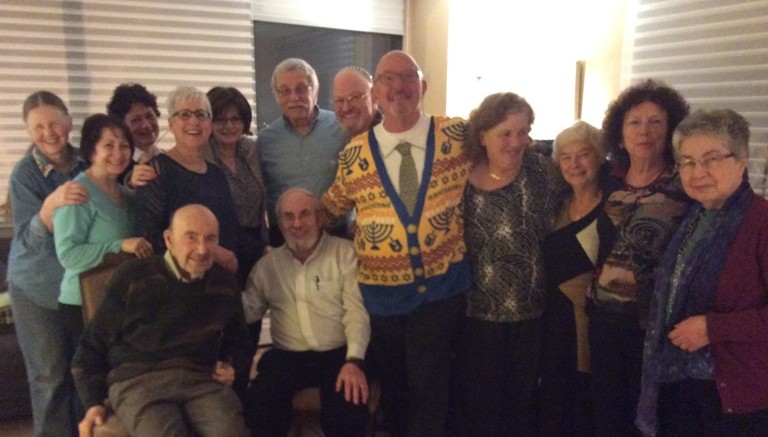 Edmonton's Beth Tzedek is a small egalitarian congregation with a lot of ruach. They are closing their doors later this month. Pictured above: Congregants enjoying a Chanukah potluck in 2015.

(EJNews) – On June 24th, Edmonton’s Beth Tzedek Congregation will be holding its last Shabbat service at the Talmud Torah Multipurpose Room, its home for the last 17 years or so.  All together Beth Tzedek was a going concern for 20 years, meeting at first in the Robertson Wesley United Church.

Beth Tzedek provided a rich environment for a group of committed individuals who together ran Shabbat and High Holiday services using Conservative liturgy, enjoyed after services kiddushim brought in turn by members, held pot luck lunches on the first day of Rosh Hashana and evening social events at Chanukah, Purim, and Motzei Shabbat once in the late summer.  For years we also held communal seders at Passover and since the inception of this tradition, we hosted Erev Shabbat across Canada at one of our members’ homes.

We had at least 11 b’nai mitzvahs over the years and 2 baby namings.  We hosted some cultural events for the community including movie lectures and more recently video lectures from the Shalom Hartman Institute in Israel which we were able to purchase thanks to a grant from the Edmonton Jewish Community Foundation.

But over the last few years, our membership dwindled due to moves out of the city, deaths and illnesses and the exodus of snowbirds in the winter season.  Eventually it became rare to have a minyan and the writing was on the wall.  Time to close.  This is a very sad event for those of us who were affiliated to the end, but inevitable.

Among the many unique things we will sorely miss are the lively discussions of the parshat hashavua, the divrai torah presented by some of our members, the social camaraderie, the melodic chanting, especially at the High Holidays when our chazanim, Jack Goldberg and Vicky Friedman, lead services that were meaningful, understandable and always included explanations of the prayers we were doing as we went along.  And these services were enhanced by the mitzvah of hearing the shofar so well blown by Paul Messinger with occasional duets when joined by Jack.  We were a group that enjoyed a liberal expression of our Judaism which hopefully will find a new home.

In closing, we would like to thank the Talmud Torah for collaborating with us in our use of its space, the Edmonton Jewish News and the Pipeline for helping us with publicity, the Jewish Federation and the Edmonton Jewish Community Foundation for their support.