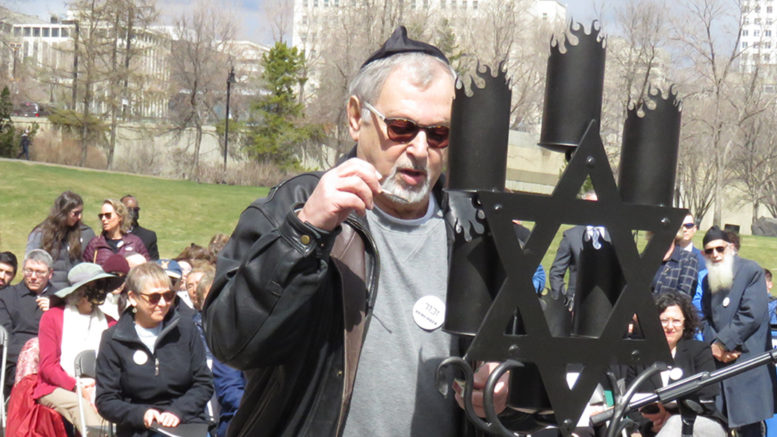 Abe Silverman lights a candle at the Edmonton Yom HaShoah service held at the Alberta Legislature Grounds on April 28.

(AJNews) – Edmonton’s Jewish community, members of the public and elected officials gathered together in person at the Holocaust Memorial monument at the Alberta Legislature Grounds in Edmonton on April 28 for a moving community-wide event to remember the victims of the Holocaust, honour the Survivors, and reaffirm the commitment to preserve the memories and lessons of the Shoah.

Prayers were recited by Holocaust Survivors and their descendants from within the Jewish community and Rabbi Zolly Claman and an emotional dvar was provided by Rabbi Steven Schwarzman.

Each speaker emphasized the importance of commemorating the victims and survivors of the Holocaust and touching on their personal connection to the horror. In addition to honouring the survivors, and their resilience, the resounding message is that we must work together to ensure that it never happens again.

A lighting ceremony was held by survivors and their descendants, using a special candelabra made by local artist Slavo Cech. The Talmud Torah choir performed beautifully at the service, highlighting the significance of carrying the message to the next generation.  They sang ‘Ani od chai’ and played their ukuleles at the end of the service, for the singing of Hatikvah.

The event was hosted by The Jewish Federation of Edmonton and was also live-streamed so that members of the community who were unable to attend could still take part.