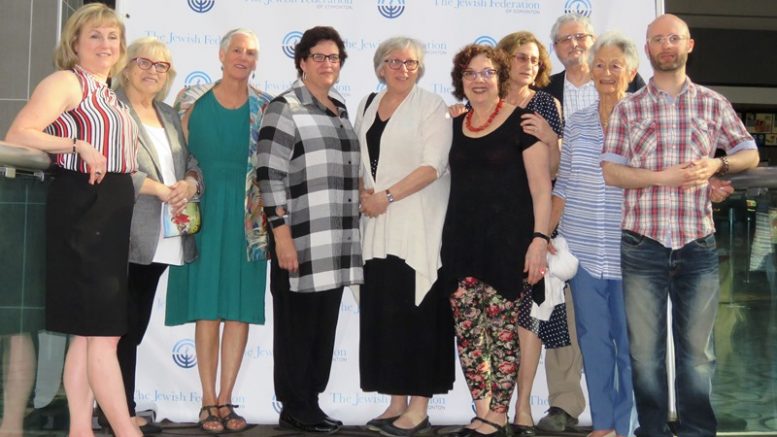 Some of the committee members of the Edmonton Jewish Film Festival who were responsible for selecting the films and organizing the 2018 Festival. The second round of films will be held May 13 - 16.

(EJNews) – Edmonton Jewish Film Festival organizers and volunteers are ramping up for the second block of films which starts Sunday May 13 and continues until Wednesday May 16.

The first segment of the EJFF was really successful, says Festival Coordinator Susan Schiffman. “We’ve had good attendance and a lot of appreciation for the quality and variety of the films that we’ve presented. Our volunteer committee did such a wonderful job selecting such a diverse range of films. We are really excited to present the second group of films starting Sunday May 13.”

Sunday’s festival patrons are in for a fabulous day of film viewing at the Landmark Cinema 9 at City Centre in Edmonton with three really strong films.  At 3 pm the feature film will be “Ben Gurion – Epilogue” and it will be followed by a short documentary “Women in Sink.”

“Ben Gurion” is an introspective look at Israel through the eyes of the first Prime Minister of Israel. The film is based around interview footage that was taken in 1968 when the great leader was 82 – five years before his death.

“Women in Sink” is a documentary drama about an unlikely friendship between an Arab woman and a Jewish woman at a small hair salon in Haifa.

At 7 pm EJFF will screen “An Act of Defiance” an historical drama that chronicles the 1963 arrest of human rights activists (including Nelson Mandela) by South African and the ensuing court battle to save them from the gallows.  This is one of Schiffman’s favorite films; she said, “It is a great period piece that really captures the mood of the place and time.” Following the film, a panel discussion will be held that includes members of our own community who are from South Africa and witnessed that era first hand.

Monday is also a great day to attend – both for the film “The Testament” and for the post film pub night at Fionn McCool’s which is next to the theatre. The film is about a Holocaust researcher who discovers classified documents that suggest his own mother is living under an assumed name.  Dr. Joseph Patrouch, Director of the University of Alberta’s Wirth Institute for Austrian and Central European Studies will be available to meet and chat with about the film.

Audiences have been enjoying the film festival, explains Schiffman. “Several of the films have been gut wrenching and powerful. You can see from the sober expressions on people’s faces as they emerge from the theatre that the films have made a tremendous impact – in particular “Muhi” and “1945.” Then they mill around for quite a while to discuss the films and their own reactions.”

The last two films are terrific but definitely lighter.

Tuesday, May 15 features a drama/thriller “Sara Stein Shalom Berlin” which recounts a murder mystery that takes place in Germany where Jewish criminal investigator Sara Stein is trying to solve the murder of Tamar, an Israeli DJ and star of the Berlin club scene.

Wednesday May 16 closes the festival with a Comedy – “Maktub: Don’t Play With Faith” where two thugs think they get a sign from above to change their ways and they lurk about the Wailing Wall in Jerusalem choosing lucky notes stuffed in its cracks whose wishes they can help manifest.

The 2018 Edmonton Jewish Film Festival is sponsored by the Jewish Federation of Edmonton along with the Centre for Israel and Jewish Affairs, Israel Bonds, Partnership 2gether, Edmonton United Jewish Appeal and the Edmonton Downtown Business Association.

Advance tickets can be purchased here.

Be the first to comment on "Edmonton Jewish Film Festival starts second round of films: May 13 – 16"