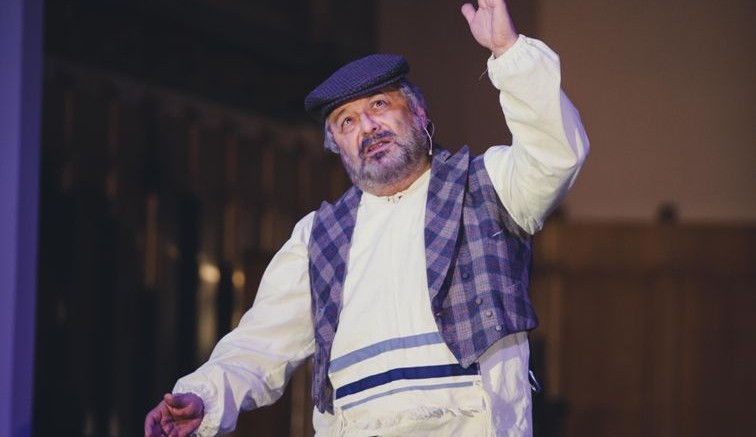 Andrew Hladyshevsky is amazing in the role of Tevye in the Trinity Players production of Fiddler on the Roof.

by EJNews Staff and JTA

“Fiddler on the Roof” is a classic story, that is timeless and it is revered by audiences of all religious backgrounds. We know all the songs by heart and can recite the renowned musical line for line.

In their Edmonton Fringe Theatre Festival production of “Fiddler on the Roof,” being shown right now at the Holy Trinity Anglican Church, the Trinity Players hit it out of the ballpark. The star of the show, Andrew Hladyshevsky, is a wonderful Tevye. He anchors the show expertly with his amazing voice and his animated attention to every detail.

He hits every note perfectly and his every movement, every expression is nuanced in a characteristic Tevye manner.  He is actually quite brilliant in the role. Director Morgan Kunitz said she knew the production was ‘meant to be’ when she met Hladyshevsky. She was 100% right.

With Andrew at the epicentre, the cast of actors and musicians come together beautifully. The story is told really well; the audience laughed, applauded, cheered and cried. It was a wonderful evening event.

The Viter Ukrainian Dancers were also amazing on the stage. Wow! These performers absolutely enhanced the production with their authentic dance moves. Their bottle dancing as well as their flips and traditional Russian dances were fantastic.

Stellar performances were also given by the actresses who played Tevye’s daughters – Hodel and Chava.  They really captured their characters and sang beautifully as well.

Trinity Players, established over 100 years ago, is the in-house theatre company at Holy Trinity Anglican Church, which as a BYOV (and Alberta’s only licensed church) is hosting NINE productions this year. This show is a remount from a sold out run in March 2015.

There is never a bad time to watch a production or listen to the soundtrack of “Fiddler on the Roof” but this summer is a very fitting time in light of the recent death of Theodore Bikel, who immortalized the role of Tevye.  The Fringe production and Andrew Hladyshevsky’s portrayal in particular, is a wonderful homage to Bikel, who won fame playing Tevye in “Fiddler on the Roof,” doing more performances of the role than any other actor.

Bikel, an actor and folk singer who was recognized in 1997 with a Lifetime Achievement Award from the National Foundation for Jewish Culture,  died of natural causes on July 21, 2015.  He was 91.

Born in Vienna, Bikel fled Austria at age 13 with his family after the 1938 Nazi Anschluss. The family settled in prestate Palestine, and in 1946 Bikel went to London to study at the Royal Academy of Dramatics Arts.

In his autobiography, according to Variety, he expressed regret about not returning to Israel to fight in the 1948 War of Independence: “A few of my contemporaries regarded what I did as a character flaw, if not a downright act of desertion. In me, there remains a small, still voice, that asks whether I can ever fully acquit myself in my own mind.”

Bikel moved to the United States in 1954 to appear on Broadway in “Tonight in Samarkand,” becoming a U.S. citizen in 1961. Also on Broadway, he played Captain Georg Von Trapp in the first Broadway production of “The Sound of Music.” During his career, Bikel appeared on stage, film and television in musicals, dramas and comedies.

In 1958 he was nominated for an Academy Award for his performance in “The Defiant Ones,” and in 1959 he co-founded the Newport Folk Festival with Pete Seeger and George Wein.

Along with his arts work, Bikel was active in many left-wing causes, from the civil rights movement to the anti-apartheid movement in South Africa to the Soviet Jewry movement to progressive Zionism and the Democratic Party. He was a longtime board member of the American Jewish Congress. In 2010, he was one of more than 150 American artists to sign a letter in support of Israeli actors boycotting performances in the West Bank settlement of Ariel.

Bikel also was a labor activist, serving as president of Actors Equity Association for 11 years and as the longtime president of the AFL-CIO-affiliated Actors & Artistes of America, according to Deadline Hollywood.

In a 2007 interview with Hadassah Magazine, Bikel linked his activism to his experience living through the Anschluss, the Nazi invasion of Austria in 1938.

“It became clear that I would never ever put myself in the place of the nice people next door who said ‘It’s not my fight,'” he said. “It’s always my fight. Whenever I see an individual or group singled out for persecution, there’s a switch thrown in my mind — and they become Jews.”

Tevye was not Bikel’s only Jewish role. In 2007 he was nominated for the Drama Desk Award for outstanding solo performance in “Sholom Aleichem: Laughter Through Tears.” And in 2014, Bikel produced and starred in the documentary “Theodore Bikel: In the Shoes of Sholom Aleichem.”

In 2013, at an event marking the 75th anniversary of Kristallnacht, the Austrian government honored Bikel with its highest honour in the arts.As a finale, Bikel asked the distinguished audience to rise, as he sang the Song of the Partisans in Yiddish.

Many of Bikel’s 27 albums featured Hebrew and Yiddish folk music — two languages that he spoke fluently, along with German, French and English. In a 2013 interview, he said that of all his accomplishments he was proudest of “presenting the songs of my people, songs of pain and songs of hope.”

In the same interview, Bikel said he had planned the inscription for his tombstone – “He was the Singer of His People” – in Yiddish.

Be the first to comment on "Don’t miss out: Trinity Players do Fiddler on the Roof justice at the 2015 Edmonton Fringe Festival"