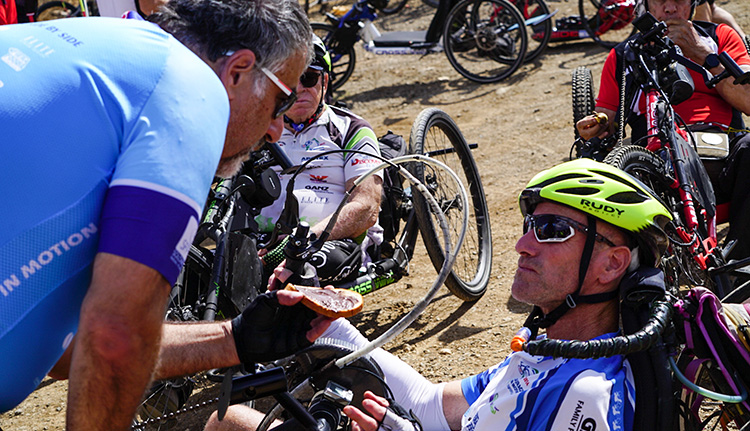 David Wallach and Sivan during the 2021 Beit Haochem Courage in Motion. (Photo by Mike @ BioArt Online).

(AJNews) – After a long wait of two years since our previous Courage in Motion cycling event in Israel, and with COVID-19 rules changing constantly in Israel and Canada, we were thrilled to get the green light for Courage in Motion 2021 from the Israeli Ministry of Tourism!

Courage in Motion is among the most significant fund-raising events for Beit Halochem Canada, Aid to Disabled Veterans of Israel. The majority of funds raised during the ride are directed toward the Beit Halochem Centres’ rehabilitative cycling programs to benefit Israel’s wounded veterans. The cycling programs in Beit Halochem Tel Aviv, Haifa, Jerusalem, and Beer Sheva consist of three different categories: Mountain Biking, Road Biking two-wheels, and Hand Bikes for the more severely injured veterans. The demand for the program is at all-time high, as it gives the injured men and women the opportunity to ride with friends and spend time in the outdoors.

Our five-day cycling tour took us through northern Israel. I decided to ride with the Heroes group, the more severely injured veterans, with the majority of them using Hand Bikes.

This year I received a special assignment. Sivan’s chaperone couldn’t participate and I was asked to ride beside Sivan and be his companion during the ride. At age 19, Sivan suffered a serious head injury during his service in southern Lebanon. As a result, he lost much of his motor skills. While he has regained most of his speaking ability, it is sometimes difficult to understand what he is asking for or what he needs. One must listen carefully and focus on what he was saying – something I was privileged to do to allow Sivan to have an enjoyable experience of the ride.

Our road tour was controlled by Police, who directed us towards the right lane to leave the left lane for traffic. Sivan used his hand bike while I rode to his left, blocking him from traffic. During breaks, I helped him drink by bringing water to his lips. He sometimes got angry with me, “David, you don’t need to stop every few seconds while you give me water. Just keep the cup to my lips.” To help him regain his energy during our breaks, I prepared and served his food as seen in the accompanying image. At the end of each day’s cycling, I lifted him from his hand cycle to his wheelchair and onto the bus. Sivan’s one complaint through Courage in Motion was “why do we stop so often? We should go faster with less stops!”  Sivan is 57 years old, and in the 38 years since being injured, he got married and has four kids!

Yes, we Albertans have faced and are still facing issues such as COVID-19, the oil and gas industry under attack, the economy, etc. However, riding beside those Heroes gave me a different perspective on our lives here, how lucky we are, and the differences between real life challenges and the temporary issues we are facing.

This was my second Courage in Motion. Like my first ride, I have returned humbled, inspired by the spirit, love and support of each other and the zest for life these injured veterans have. If you participate, I guarantee that meeting and riding with these Heroes is an incomparable life experience.

Due to the difficulties because of COVID-19 and the constantly changing rules, I was the only Albertan to ride this year. We hope to have a bigger group representing the province next year. Courage in Motion will take place on October 23-27, 2022 through southern Israel.  The ride will end at Beit Halochem Jerusalem. If you are interested in joining me or learning more about the ride, feel free to contact me at dwallach@barclaystreet.com or 403-290-0178.

If you would like to learn more about this amazing event go to www.courageinmotion.ca

Be the first to comment on "Courage in Motion: An inspiring journey with IDF’s wounded veterans"