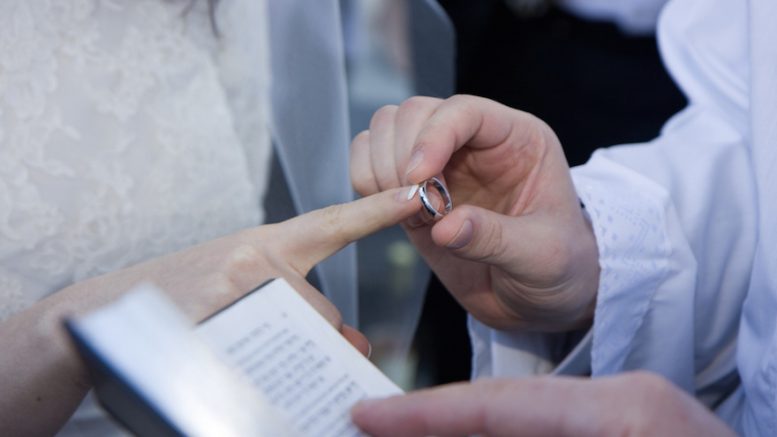 “The most common response I’m seeing is confusion.”

That’s what some Conservative rabbis are saying about their movement’s recent major statement on intermarriage, which reasserts the ban on rabbis performing interfaith weddings while urging its member synagogues to welcome interfaith couples in any and all ways before and after the nuptials.

The letter, signed by the leaders of the centrist movement’s four major institutions and made public Wednesday, does not reflect a change in policy.

“A lot of rabbis felt like this latest letter really is non-news,” said Rabbi Jason Miller, a technologist who serves as a part-time pulpit rabbi in Toledo, Ohio, and administers a Facebook group for Conservative rabbis. “To just come out and restate the ruling in a nicer way isn’t news, and ultimately it doesn’t help those families who are hurting.”

The letter was prompted by declarations by a few Conservative-ordained rabbis earlier this year that they would begin performing mixed marriages. It affirms “the traditional practice of reserving rabbinic officiation to two Jews, but emphasizes that its authors are “equally adamant that our clergy and communities go out of their way to create multiple opportunities for deep and caring relationships between the couple and the rabbi, the couple and the community.”

Despite the effusive language welcoming non-Jewish partners, several leading Conservative rabbis are criticizing the letter, questioning why it was necessary and calling for the ban either to be lifted or modified.

Some rabbis say the letter is at best repetitive and at worst damaging — another reminder to interfaith couples that the movement does not sanctify their marriages. The rabbis also complained that they were presented with the letter this week as a fait accompli, just days before it was published, without having the chance to offer feedback.

“It comes off as digging its heels in the sand,” said Rabbi Jesse Olitzky of Congregation Beth El in South Orange, New Jersey. “It comes off as trying to be welcoming without being welcoming. We try to celebrate all those who are part of our community, and statements like this make it harder for us to do so.”

Rabbi Jack Moline, the former rabbi of Agudas Achim Congregation in Alexandria, Virginia, and now a civil liberties activist, added: “This is a phenomenon we’ve been dealing with for a long time, and why this particular statement was issued at this particular moment is confusing to me. My objection to it isn’t that we shouldn’t be taking this position. My objection to it is there’s no ‘there’ there. Why am I focused on this right now? Everything about it seems to be random.”

The Conservative movement has long attempted to straddle the question of intermarriage — neither accepting it like Reform Judaism nor declaring it anathema like much of the Orthodox movement. Its ambivalence toward mixed marriages comes from the movement’s mission to observe Jewish law while embracing the modern world — and from congregations that include both traditionalists and, like a majority of American Jewish communities, families affected by interfaith marriage.

Conservative Jewry falls in the middle when it comes to the data on intermarriage. About a quarter of Conservative Jews are intermarried, compared to almost no Orthodox Jews and half of Reform Jews, according to the Pew Research Center.

The prohibiting-yet-welcoming posture isn’t new. It’s the same stance that the Rabbinical Assembly took in 1972, when the association of Conservative rabbis adopted a paper prohibiting interfaith marriage. Written by Rabbi Aaron Blumenthal, the paper urged that “every effort should be made to retain contact with the intermarried couple,” who “deserve our deep concern,” according to the Jewish thought journal Zeramim.

Similar language appeared in a June statement from the United Synagogue of Conservative Judaism, which restated the ban and urged the movement to “expand our efforts to welcome all families, including those that are interfaith, to explore Judaism together with us.”

Artson says the language of welcoming is more assertive in this letter than in past statements, and that the unanimity it represents among Conservative institutions makes it especially powerful: It was co-signed by Arnold Eisen, the chancellor of the Jewish Theological Seminary; Rabbi Julie Schonfeld, CEO of the Rabbinical Assembly; and Rabbi Steven Wernick, CEO of the United Synagogue of Conservative Judaism.

Artson said he consulted with 15 young, up-and-coming rabbis while writing the letter.

“The fact that we periodically reaffirm our core convictions is part of being a healthy organization,” he said. “Christians have been believing in Jesus for a long time, but they keep sharing the good news.”

Artson portrayed the letter as another stage in a long process of re-evaluating the ban. Conservative rabbis are prohibited from officiating at or even attending intermarriages; failure to heed the ban is one of three ways a Conservative rabbi can be expelled from the Rabbinical Assembly. The other two are performing a conversion that violates Jewish law and performing a wedding of someone who was married but did not have a Jewish divorce.

Several rabbis have already run afoul of the officiation ban.

Seymour Rosenbloom, a retired Philadelphia rabbi, was expelled from the Rabbinical Assembly in December for performing an intermarriage. In June, the Conservative-ordained clergy at B’nai Jeshurun, an influential, nondenominational New York synagogue, announced that they would begin performing intermarriages. So did Rabbi Amichai Lau-Lavie, a JTS ordainee who heads the experimental congregation Lab/Shul in New York.

“More and more rabbis feel uncomfortable and even brokenhearted at being caught between the call to serve all of their families, and between the requirement of the Rabbinical Assembly,” said Rabbi Adina Lewittes of Sha’ar Communities in New Jersey and an interim rabbi at B’nai Jeshurun. For intermarried couples, she said, the ban ”causes them to question the appropriateness of their belonging in that community. It causes, often, a fatal blow to the relationship.”

A Rabbinical Assembly commission has been examining the intermarriage prohibition, and Artson expects the group’s Jewish law committee to re-examine the ban soon.

One change might be a lifting of the ban on attending intermarriages performed by others, he suggested, something his letter “cracked open the door” to by recommending that rabbis be present throughout the wedding process for interfaith couples. This year, the movement took another step toward integrating interfaith couples by voting to allow synagogues to admit non-Jews as members.

Some of the rabbis who spoke to JTA said the movement could go a step further, crafting a ceremony for interfaith couples that does not conform to the traditional Jewish wedding ritual, called “kiddushin.” Rabbi Menachem Creditor of Congregation Netivot Shalom in Berkeley, California, noted that the option for such a ceremony already exists in Conservative liturgy for same-sex couples.

“If the Conservative movement is truly a pluralist movement, there is room for more than one opinion even on the biggest questions,” he said. “Jewish law and tradition can sanctify anything in the world.”

Miller, the Ohio rabbi, said the ban personally affected him when he couldn’t attend his cousin’s interfaith wedding — an abstention he said he would not repeat.

“I didn’t go to my cousin’s wedding because he married a non-Jewish woman, and it caused an unhealable fissure in our relationship,” he said. “I can’t afford for those relationships to be so hurt.”