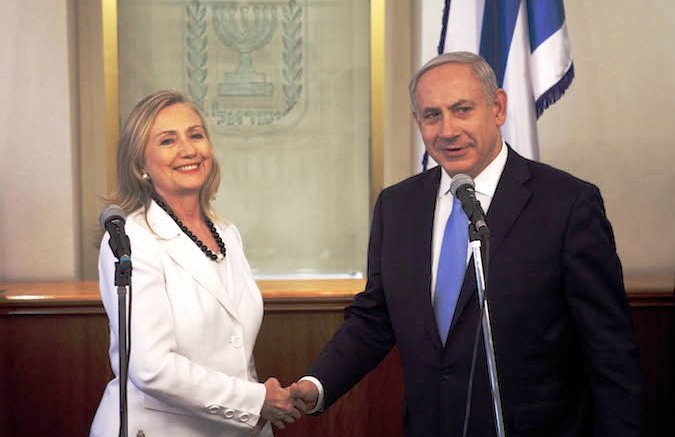 WASHINGTON (JTA) – Hillary Clinton does not appear until 90 seconds into the two-minute video rolling out her campaign. No one among the bright and diverse array of everyday Americans in that video mentions foreign policy. Or Barack Obama.

Jewish Democrats say the video released this weekend is emblematic of the approach that Clinton is likely to take as she tries to straddle her loyalty to Obama with the perceived need to distance herself from the tensions that have characterized his administration’s relationship with Israel.

That tack is embedded in her statement issued March 29 through Malcolm Hoenlein, the executive vice president of the Conference of Presidents of Major American Jewish Organizations.

“Secretary Clinton thinks we need to all work together to return the special U.S.-Israel relationship to constructive footing, to get back to basic shared concerns and interests, including a two-state solution pursued through direct negotiations between Israelis and Palestinians,” Hoenlein said, describing a phone conversation he initiated with Clinton.

Clinton, notably, is once removed from the statement, delivered in Hoenlein’s voice. Obama is not mentioned, but she calls for a “return” to “constructive footing,” an acknowledgment that the relationship has gone off track.

“The language she used very much indicated it is time to reignite the bonds that are essential to the counties and how the U.S.-Israel relationship is perceived by the rest of the world,” said Steve Grossman, a past president of the American Israel Public Affairs Committee, who supported Clinton in her first presidential bid in 2008 and is backing her for 2016.

Steve Rabinowitz, a senior communications official in the Bill Clinton administration who now runs a public relations consultancy, said there is “no needle to thread”: Clinton and Obama worked well together when she was his secretary of state in his first term, Rabinowitz said, and she would be able to distinguish herself from the president without diminishing his accomplishments.

“It will be obvious she has her own vision of the world and that none of this is disrespectful of the president,” said Rabinowitz, who backed Clinton in 2008 and this year helped found the fundraising group Jewish Americans for Hillary.

Barbara Goldberg Goldman, a Democratic activist who campaigned for Obama in 2008 and 2012 and now backs Clinton, said attempts to cast Obama as harmful to Israel were “shameful.” She expected Clinton would focus on the domestic issues that draw Jewish majorities to Democrats.

“When you look at polls and talk about the Jewish community in terms of what issues are most important, Israel’s not on there,” Goldman said, noting that Jewish voters are concerned mostly with the economy – the issue on which Clinton’s campaign launch video focused.

Some Jewish Democrats who have had longstanding relationships with the Clintons said Hillary Clinton could ill afford to alienate the party’s base by appearing to attack Obama.

“She’s really in between a rock and a hard place,” said a former top party official who worked closely with the Clintons in the 1990s and has strong ties to the pro-Israel community.

“Most Democratic voters in primaries in particular will look for someone who is agreeing with Obama on everything,” said this former official, who spoke anonymously in order not to alienate any candidate. “Some of the most prominent Jewish Democratic donors are very concerned about the relationship the president has had with (Israeli Prime Minister Benjamin) Netanyahu and the Iran deal.”

Obama and Netanyahu have been at odds for years over Israeli-Palestinian peacemaking and the nuclear negotiations between the major powers and Iran. Obama backs the outline of an Iran deal released earlier this month, which trades sanctions relief for restrictions aimed at keeping Iran from becoming a nuclear power. Netanyahu has said the deal, to be completed by June 30, would leave Iran a nuclear weapons threshold state and endanger Israel.

Clinton, as secretary of state in Obama’s first term, was deeply involved in the ultimately failed Israeli-Palestinian talks as well as in laying the groundwork for the Iran talks.

In statements since then, she has simultaneously endorsed Obama administration efforts while subtly staking out a position to the right. After this month’s deal outline was released, Clinton called it an “important step” but added that “the devil is in the details.”

A major donor both to the Democratic Party and pro-Israel causes wondered whether Clinton is the unalloyed Israel supporter she was during her term as U.S. senator from New York, from 2001 to 2009, or the secretary of state loyal to Obama.

“The senator was good on Israel, the secretary was average,” said this donor, who also asked not to be identified in order not to alienate candidates.

Clinton in her most recent autobiography, “Hard Choices,” depicts herself as unabashedly in love with Israel. But like Obama, she is also clearly ambivalent about Netanyahu.

In the book, she called the slain prime minister Yitzhak Rabin a “close friend” and former prime minister and president Shimon Peres an “old friend.” She said Tzipi Livni, a former opposition leader and a key negotiator in the talks with the Palestinians, was “smart and tough.” And then, upon Netanyahu’s 2009 election: “I had known Netanyahu for years. He is a complicated figure.”

She describes her March 2010 phone call to Netanyahu after Israel’s government embarrassed Vice President Joe Biden during a visit to Israel by announcing plans for new building in eastern Jerusalem.

“I didn’t enjoy playing the bad cop, but it was part of the job,” she wrote.

But Republicans won’t let her get off the hook so easily. Matt Brooks, who directs the Republican Jewish Coalition, said he will cast a Clinton presidency as a third term for Obama.

“She was the one who proudly talked about spending 45 minutes on the phone yelling at the prime minister,” he said, referring to the 2010 call.