Chabad of Edmonton celebrated a Crown of Creation event on September 25 with Rebbetzin Devorah Pinson, Reisa Segal, Lauren Baram, (one of the Honourees) Rebbetzin Liebe Lagnado), Eve Rose and Clarice Switzer. Shirley Goldberg was the second Honouree of the event.

(EJNews) – On Sunday, September 25, over one hundred and twenty ladies from across the community gathered to celebrate an event hosted by Chabad of Edmonton honouring long-time volunteers Rebbetzin Liebe Lagnado and Shirley Goldberg.   The gathering, “The Crown of Creation” was organized by Rebbetzin Rifka Drelich and her very able committee.

Shira Sheckter, started off the evening by acknowledging what was on the mind of all present, and that was the tragic loss in the Edmonton community of Dov Ber, the young son of Rabbi and Rebbetzin Dovid Sass.

Rebbetzin Rifka then welcomed everyone and explained how this women’s event saluting those who have made a difference in our community should inspire all, and that these ladies are the equivalent of our modern-day Matriarch Sarah.  She continued with a D’var Torah explaining that each person has a body and a soul and each person is precious.  When the Mashiach comes all the neshamas (souls) will be united. Until then, the neshamas of our beloved relatives and friends want us to move on and keep their legacies alive.  Rebbetzin Rifka went on to discuss Rosh Hashanah and explain that it is a time when we each have an opportunity to start afresh and a time to ask Hashem to grant us a year of only goodness in our lives. 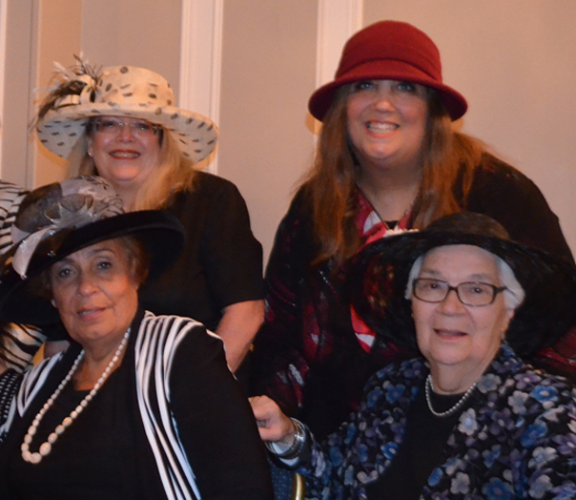 Next Rebbetzin Liebe Lagnado addressed the ladies, at which time she honoured her parents by describing their characters and sharing some memories she has of them. Rebbetzin Lagnado continued by explaining how Hashem created the world and left it to each one of us to make it a better place for all.  She went on to quote a Midrash stating that Hashem placed two notes in each individual’s pocket. The first one reads,” You are but dust and ashes,” while the second declares, “You are the Crown of Creation.  The world was created for you.”

She explained that confidence can turn to arrogance in the blink of an eye and that’s when one should read the first note – “You are but dust and ashes.”   Other times when one may feel dejected and hopeless, unable to do anything right, one needs to read the second note – “You are the Crown of Creation.  The world was created for you.”

The rebbetzin explained that we must be aware of what is in our power to do, and what is beyond our scope.  Although one might be enamored of an idea or project, have a strong feeling about someone or something, acting on those ideas and feelings has consequences.   Rebbetzin Lagnado concluded by thanking Hashem for endowing her with the strength and ability to serve the community and wished everyone a Ketivah V’Chatimah Tova.

Shirley Goldberg spoke next telling everyone how important it is to uphold traditions and participate in life-cycle events.  She explained the importance of Jewish Education for both adults and children, and how one should observe “shiva” – the period of mourning – and recite “kaddish” and not neglect the memory of loved ones.  Shirley went on to explain that every newborn boy should have a Brit Milah performed by a Mohel.  She said that we are taught that Hashem forgives sins against Him, but for sins committed against one’s fellowman, there is the concept of “mechila” –  specifically asking for forgiveness from individuals.

The evening continued with a Hat Show narrated by Gail Estrin, featuring hats from Shirley’s own collection, as well as “sheitels” (wigs) and “tichels” (head coverings), supplied by Shira’s Wigs.  All the items were beautifully modeled by ladies in the community.

Throughout the evening, the ladies were “wined and dined” with champagne and a variety of appetizers and salads as well as an array of special Rosh Hashanah treats.

While chatting and getting to know each other, the ladies in attendance were entertained with a musical interlude by Riquette Sherman, who has recently joined the Edmonton community. Throughout the evening, Bobbi Scheeler, director of communications and marketing at the Menorah Academy recorded the highlights so that everyone could all have a “record” of the event.

The evening concluded with Rebbetzin Devorah Pinson reciting the “after blessing” for the goodies which were provided and enjoyed.