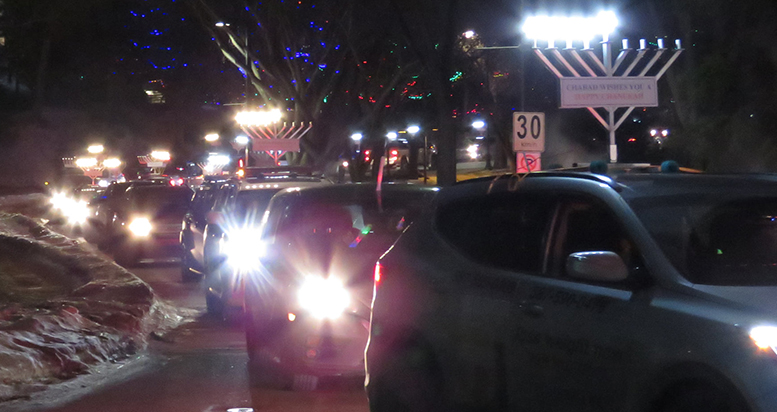 (AJNews) – The words “change” and “adapt” have become staples in our COVID-conscious day and age.  Nowhere is this more apparent than in the lives of our children.  Almost a year has passed since the term “online-learning” became a household word uttered countless times each day.  And yet, as the Jewish youth enrichment programming at Chabad of Edmonton has demonstrated, there are endless possibilities for new innovation approaches to improve engagement.

“It is more important than ever to show our kids that they are a part of a Jewish community,” commented Rabbi Dovid Pinson in a recent phone interview. “Our focus is on what they need.”

My husband Dmitriy and I have been sending our son Benji to the Chabad of Edmonton’s CKids weekly programs for many years now – and we all consider it an essential part of his 10-year-old’s world.  On Sunday mornings he might grumble as we coax him out of bed, but by pick-up time, he never wants to leave; it often takes us up to thirty minutes to tear him away from his friends and activities.  On the drive home he barely stops to breathe as he recounts all he and his friends worked on, talked about, and the activities that the Rabbi, Rebbetzin, and their helpers expertly orchestrated.  That was before.

When this new year of CKids programming kicked off in September 2020, parents still dropped off their eager youngsters at the Fantasyland Hotel, but this time, instead of just reminding our sons that kippas stay on their heads, we also needed to reiterate that facemasks need to remain on at all times.  But quickly the children were welcomed by Team Pinson’s electric positivity, and suddenly, normality felt possible again.

“We wanted to put our energy into figuring out and adapting to what the children need most during these times,” Rabbi Dovid explained.  “We don’t focus on thinking about if we will have a great big program.  It’s about asking: ‘what do the kids need?’ and if we can address what they need guided by their Jewish learning, then we are successful.”

When in-person CKids activities were taking place, each child would have their own individual workstation set up just for them.  “This way we were able to maintain social distance and the kids would be able to see their friends and we could all interact.  We still have some of this with our online Zoom sessions, but it can be difficult when each child is joining from an entirely different environment,” he noted.  “But this has shown me that I need to be more aware while I’m teaching.”

When new restrictions were introduced, the Pinsons worked quickly to adapt CKids yet again.  “We were able to collaborate and share strategies and resources with other Chabad programs from across North America,” explained Rabbi Dovid. Within days of the new regulations being rolled out, Benji woke one morning to find a box of carefully pre-prepared materials waiting for him on our doorstep.  Inside were all the things he would need to participate in weekly CKids activities from our own basement.  Now, every two weeks I go pick up pre-organized program packages for Benji to use during CKids Zoom meetings.  Perking my ears up to listen in from upstairs, the energy and enthusiasm is explosive, and the kids could not be more excited to see Rabbi Dovid and all their friends. 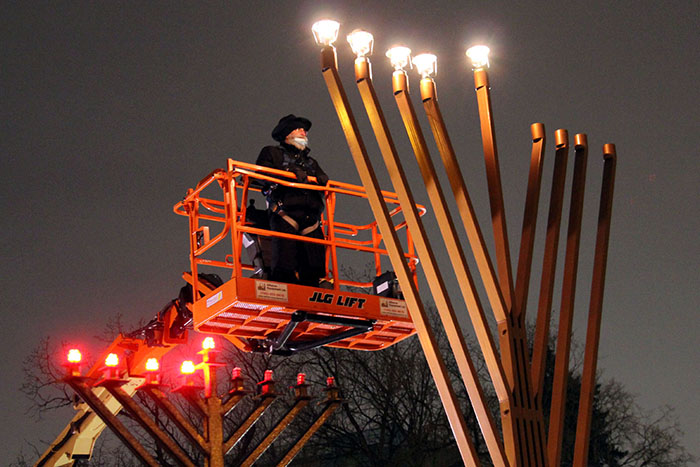 Chabad of Edmonton Rabbi Ari Drelich lit the Giant Menorah and the event was live streamed so the Jewish Community could celebrate Chanukah together. (Photo by Jim Moses)

As Chanukah grew closer, we all knew that we would have to find new ways of sharing the light of the holiday with our friends and families.  On Sunday, December 13, a motor parade of 100 cars, 40 of which were adorned with giant Chanukiyot, wound its way from the West End of Edmonton, down Whyte Avenue, past the Provincial Legislature, and back again via Stony Plain Road.  Hot thermoses of tea in hand, bags of Bissli at the ready, our family secured the large metal Chanukiya to the roof of our car and set out.  As we drove by the Legislature, familiar faces of volunteers from the community waved and reminded us all to stay safe and remain in our cars.

Click here to see the photo gallery from the Chabad of Edmonton Chanukah Giant Menorah Lighting that was live streamed courtesy of the Jewish Federation of Edmonton.

Rabbi Ari lit the Giant Menorah and offered an inspirational message to the community that was live streamed on Zoom courtesy of the Jewish Federation of Edmonton. Also in attendance were MLA Lorne Dach, MP Kelly McCauley and Edmoton City Councilor Jon Dziadyk, each of whom offered their best wishes to the community for a holiday filled with light and love. 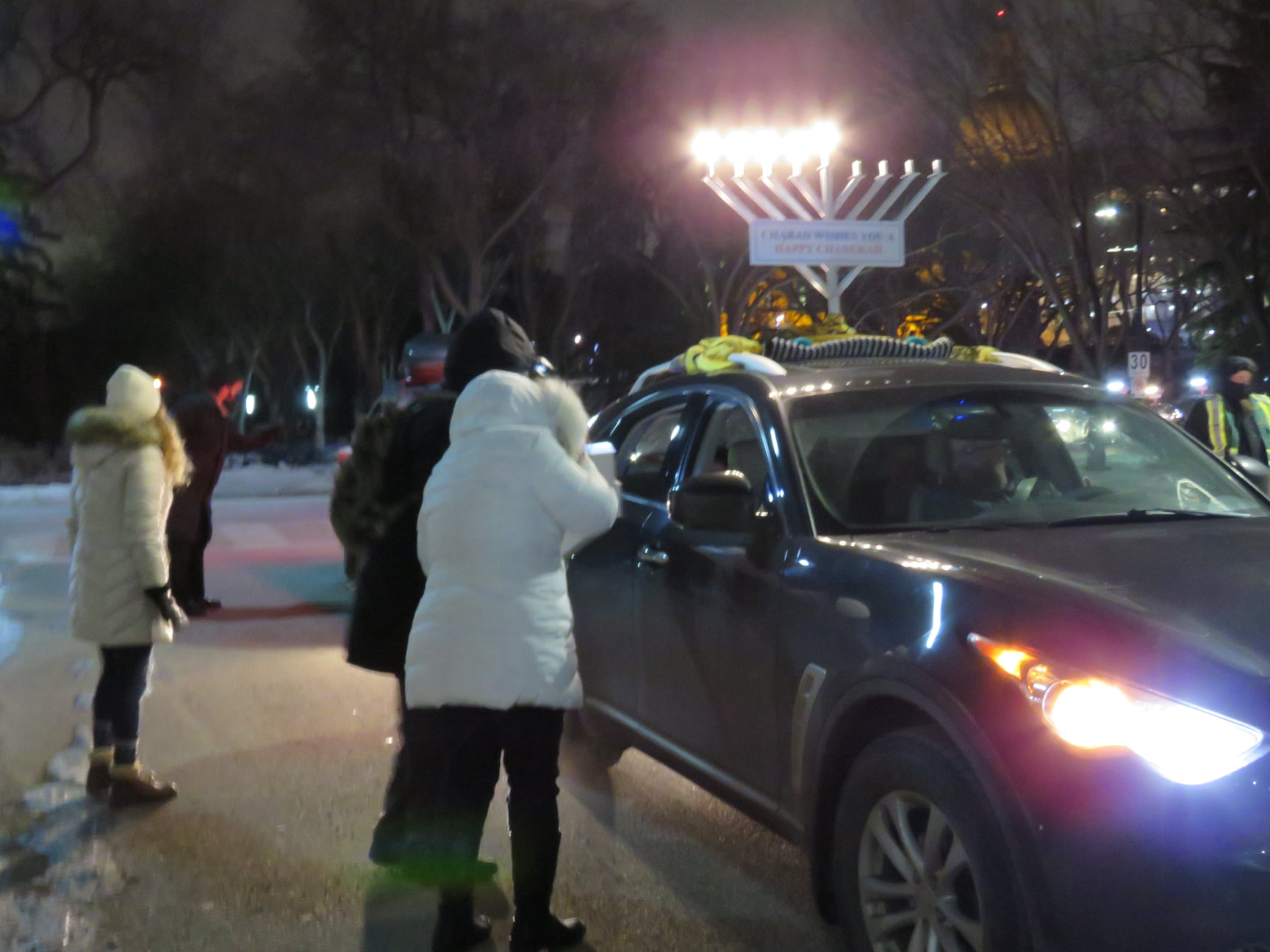 Volunteers distributed Chanukah gift bags to everyone who participated in the motor parade.

“We handed out almost 300 gift boxes,” Rabbi Dovid told me happily.  “Our CTeens all got a package delivered to them for Chanukah.  Each teen received a CTeens thermos that we brought in from New York, hot chocolate for their thermoset, and poems about keeping warm.  They also got a Chanukiya and were asked to give it to someone else to help share the light if they already had one at home.”  Smaller children, like Benji, got a dreidel and Chanukah gelt and eight tiny glass bottles packed with special Chanukah missions to complete each night.  Benji took these nightly missions very seriously.  If possible, this was Benji’s most engaged and traditionally-aware Chanukah yet.

“Attendance and participation in our programs has grown,” said Rabbi Dovid.  And in a time when so many are suffering loss, emotional fatigue, and economic hardship, the support of a strong Jewish community, and enriching Jewish education is an elixir for the mind and soul.  “We know that so many people everywhere are experiencing incredible challenges and tremendous loss and grief.  We just keep asking ourselves what those around us need.  The fourth Lubavitch Rebbe would teach that you don’t stop because there is a river in your path but figure out how to jump over it.”

In this way the Pinsons have found creative ways of launching over the obstacles of our time.  “Much of what we do is not in spite of COVID, but because of it.”  Rabbi Dovid now conducts weekly thirty-minute one-on-one teaching sessions with pre-Bar Mitzvah age children.  “This is such an incredible thing that we’re able to do.  The kids aren’t able to go to shul, but they have direct access to their Rabbi.”  Each week, 30 children jump on Zoom individually at prescheduled times with Rabbi Dovid.

“We are seeing incredible progress because of the one-on-one format,” he explained.  “The way I teach has evolved, and many of the tools I’ve adopted are ones I will keep using.”

In our home, these sessions have resulted in Benji reflecting in greater detail upon his own actions and surroundings.  He collects ideas throughout the week of things he wants to talk to Rabbi Dovid about and is gaining much greater inner and outer insight through the process.

While so many educators, myself included, wistfully dream of a day when all will return to something resembling what once was, both Rabbi Dovid, and Rebbetzin Devorah, have found new approaches to teaching that they intend to continue developing even after COVID-19 is fully in the rear-view mirror of our collective consciousness.  For Jewish youth programming in Edmonton, the words “change” and “adapt” have brought about creativity and collaboration in a way that has united the City’s Jewish community in a new way that could not have been anticipated.

In a television interview with Carlie Robinson on CityNews Rabbi Ari Drelich stated: “Let’s do what we can do and do things in a safe manner…When two poles are falling, even though they’re both weak, when they fall against each other, each one’s weakness will be the other one’s strength.”

Rabbi Dovid also reminded me to think of this as an opportunity to grow.  As so many battle the harsh realities of COVID-19 though, Edmonton’s Jewish community can take solace in the fact that our children are finding strength in meaningful Jewish learning.