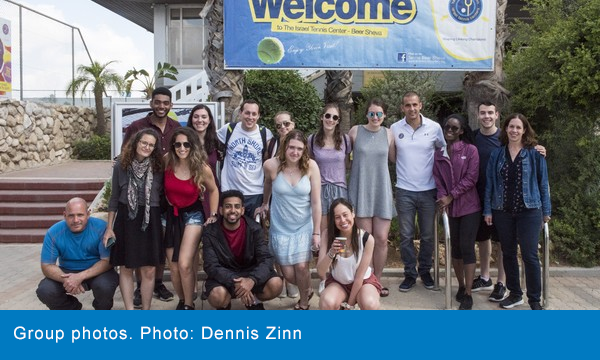 The recent JNFU trip to Israel included three University of Alberta students including Hillel President Dina Apartsin. Among many other places, the students visited an Israeli Tennis Centre similar to the one that will be build in honour of Lisa Miller and Farrell Shadlyn - honourees of the Edmonton JNF Negev Gala. For information visit jnfedmonton.ca.

(EJNews) – The 2018 Edmonton Negev Gala will be held on June 19 at the Fantasyland Hotel Ballroom in West Edmonton Mall, honouring Lisa Miller and Farrel Shadlyn QC. The event, hosted by Jewish National Fund (JNF) Edmonton, will include a delicious Kosher meal and a wonderful evening of entertainment on the theme of Jewish composers on Broadway. Local theatre favourite Rachel Bowron and pianist Mark Limacher will be performing. Tickets are limited so reserve yours soon by emailing edm@jnf.ca or calling 780-481-7881.

It has been a busy month at JNF; on May 10, a Canadian university students’ tour of Israel was organized by JNF University (JNFU), which works to connect university students with Israel and KKL-JNF.
Thirteen Canadian university students, including three from Edmonton, took part in this year’s JNFU 10 day trip to Israel, in order to strengthen their ties to the country and learn more about it. Accompanying the group was JNF Canada’s Campus and Young Leadership coordinator, Anna Kos, who described the participants as committed and passionate about Israel.

“We hope that they will be effective Ambassadors for Israel when they go back to their universities; especially on those campuses where the BDS movement is gaining strength.”

The group traveled throughout Israel for 10 action packed days.

In Beer Sheva, they visited the local Israel Tennis Center (ITC) which is due to be renovated shortly, following a generous donation from JNF Canada (Toronto). The affiliate ITC in Haifa will be the beneficiary of proceeds from the 2018 Edmonton Negev Gala and will be home to The Lisa Miller and Farrel Shadlyn QC Tennis Courts for Peace.

Israel Tennis Center (ITC) Manager Yaniv Sakira told the group that unlike other places in the western world, tennis in Israel is not only for the rich and privileged. He used his own life experience as an example of how tennis in Israel welcomes and helps the less fortunate members of society.

“I came from a poor background and a broken home. As a child, the ITC gave me the opportunity to channel my energies in a positive way that kept me off the streets and out of trouble. I managed to hone my skills and become one of the country’s best tennis players. Later I became an officer in the army and graduated from university. I can honestly say that the values and life skills I learned came from my years at the ITC.”

In response to his guests’ questions, Sakira explained that the club is open to all residents of Israel across the racial and religious divide.

“We have Jewish, Arab, and Druze players. Many of our members are children of Ethiopian immigrants. Three of our current champions who represent Israel in tennis tournaments around the world are from the nearby Bedouin town of Rahat.”

Before leaving the site, several of the tour participants took to the courts for a few rounds of tennis.

The group then traveled to the KKL-JNF nursery at Gilat, which is a living laboratory and testing ground for trees from all over the world, to examine which species are suitable for growing in Israel. They were welcomed by nursery director Pablo Cherkasky, who led them around the site, pausing at plants from exotic places to explain how they acclimated to Israeli weather conditions and what could be learned from them. He said the nursery puts special emphasis on species that do not demand a great deal of rain.
“Besides our research, we also produce saplings for KKL-JNF forests, public gardens, and communities in the region. This is a free service from KKL-JNF to the public.”

While meandering around the magical 50-acre facility, the visitors also had time to talk about themselves and reflect on their trip in Israel, which would be ending the next day.

Dina Apartsin, who is president of Hillel at the University of Alberta in Edmonton, said that she loves coming to Israel and never misses an opportunity to go. “This is my 2nd JNF trip to Israel,” she remarked. “Both were wonderful, and each concentrated on a different theme, but this one was without a doubt the best.”

Melanie Gayle Wisener, who said she likes to use her Hebrew name Malka in Israel, was proudly wearing a blue and white “Israel Team” tennis shirt that she received as a gift from the manager of the tennis center.

“The highlight of my trip was Jerusalem, and not just because it was Jerusalem Day. I spent most of each day that we were in the ancient city, at the Kotel. I feel a special energy there that I cannot describe. It draws me in. I participated in a Birthright trip last year and I enjoyed Israel so much that I stayed on for a few more months. Now I decided to do that again and so I will not be flying home tomorrow.”

Cousins Mahder Gerezgiher Hailu and Kidus Teffere are of Ethiopian Christian descent, and are both students at the University of Alberta in Edmonton. They were visiting Israel for the first time. Gerezgiher said that they were invited to join the group by Dina, the president of Hillel at their University.

“I was very interested to see what Israel was all about. I had heard of the massive immigration of Ethiopian Jews to this country and I was curious to see how they were faring. This trip has been indescribably good. I don’t have the words. Each day was better than the last. I will definitely be back.”

After lunch at the iconic restaurant Rahela in Ofakim, the group returned to Tel Aviv for final activities and meetings, before flying home to Canada the next day.

For more information about JNFU or the 2018 Edmonton Negev Gala visit jnfedmonton.ca.