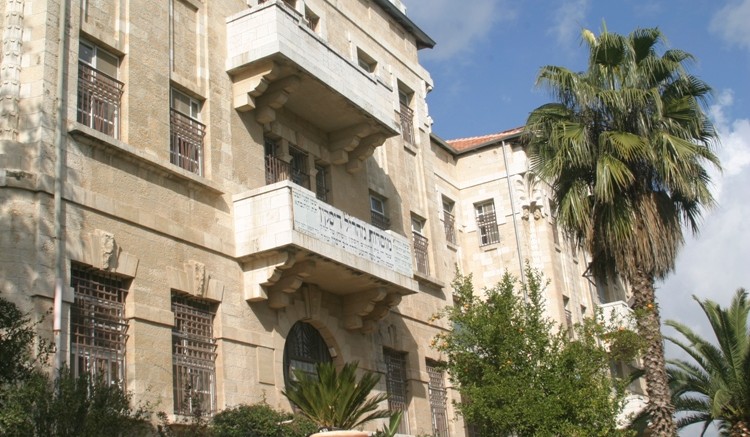 The Canadian Friends of Diskin is a charitable organization that provides relief and financial assistance to underprivileged children living at the Diskin Orphan House in Jerusalem.

There’s only one thing that’s more important than giving, and that is preserving the recipient’s dignity,” said Avraham Adam, project manager of “Diskin Orphan Fund of Israel.” Such simple words, and yet so difficult to accomplish.

Every year – before Rosh HaShanah and before Pesach – Diskin distributes over a thousand sets of clothing for children and youths whose childhood was shattered by the death of a loving parent. They must cope with the agony of being orphans and also with the pain of deprivation. Diskin provides clothing as part of its massive campaign to assist and support orphans throughout the year, year after year, as it has been doing for 135 years. 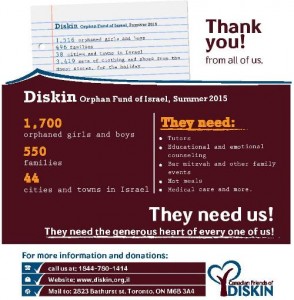 It was in 1880 (5641) that Rabbi Yehoshua Leib Diskin, zt”l, opened his humble home to the orphaned children of Jerusalem. Ever since that time, the name Diskin has been synonymous with the term “father of orphans” for so many, and it has served as a source of comfort and hope for orphans, widows and others who lack familial support.

During the first hundred years of its existence Diskin was a classic orphanage, wherein children received a warm home, loving care, schooling, and an environment that truly prepared them to become responsible adults. Over the past thirty-five years, “DiskinOrphan Fund of Israel” has provided a broad-based program of support for thousands of orphans in a variety of ways – but in the setting of their own family homes and environments, which is a far more natural and healthy approach. This gives them the chance to have a normal, wholesome childhood and adolescence, like all children their ages.

Diskin provides clothing, sponsors bar mitzvah celebrations and other family events, hot meals, tutors, educational and emotional counseling, medical care and more. These are the tools through which Diskin gives orphans the opportunity to live with optimism and hope for the future.

The most fascinating aspect of the Diskin team’s approach is the way they handle their charges. They go to great length to offer their services with discretion, preserving the dignity of the orphans and their families. This is their number-one concern; when it comes to matters of dignity, there is no room for compromise. The focal point of Diskin’s relationship with every orphan and his/her family is to be keenly sensitive to their feelings. As Avraham Adam remarked, “Isn’t it enough that they must suffer the unfathomable pain and helplessness of being orphaned? Must they be punished further by the humiliating experience of becoming objects of pity, by being made to feel as though they are the most unfortunate of all needy people?”

Before Pesach this year, 1,516 orphaned children, who lost a father, a mother or both parents, received a full holiday wardrobe. However, not one child was given clothes. In the spirit that characterizes all of Diskin’s projects, each orphan received gift certificates for the finest clothing and shoe stores. In this way, each child could choose clothing suited to his own taste.

“We hope we can be the next-best thing to a real family,” said Avraham Adam, “and we try helping just as a father or mother would have done.”

Be the first to comment on "Canadian Friends of Diskin: There’s only one thing more important than giving…"