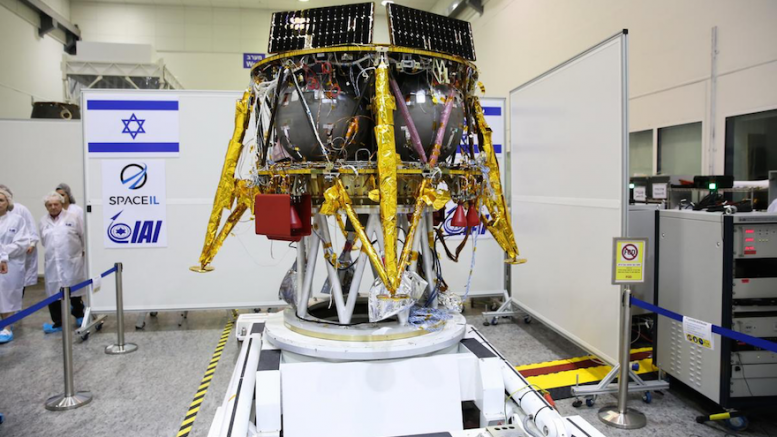 The first Israeli lunar spacecraft was originally scheduled to be launched in December. (Eliran Avital)

JERUSALEM (JTA) — A Canadian billionaire and businessman has joined the project to land the first Israeli spacecraft on the moon and contributed $5 million to the effort.

Sylvan Adams, who brought the Giro d’Italia Big Start cycling race to Israel this year, on November 19, 2018 visited the Israel Aerospace Industries’ MBT Space facility in Yehud, where the spacecraft is being assembled, SpaceIL announced.

SpaceIL, which is working to make Israel the fourth country to reach the moon behind United States, Russia and China, was the only Israeli contestant in the international Google Lunar XPRIZE competition. To win the first prize of $20 million, the participants were required to land an unmanned spacecraft on the moon. The competition ended officially with no winner on March 31, when Google announced that it would no longer sponsor the competition.

SpaceIL announced that it was determined to continue its mission and to launch its spacecraft, despite the dissolution of the competition.

Morris Kahn, a businessman and philanthropist who says he regards completing the project as his “personal mission,” has donated $27 million to the effort and serves as the project’s president.

In October, SpaceIL and the Israeli Space Agency announced a collaboration with NASA that would enable SpaceIL to improve its ability to track and communicate with the spacecraft before, during, and after landing on the moon.

The non-profit says that part of its goal is to inspire future generations and encourage them to choose to study technology and science.