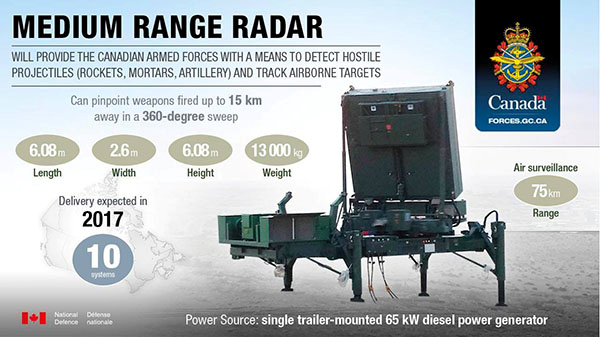 Earlier this week, Minister of National Defence Jason Kenney unveiled a plan in Saint-Jean-sur-Richelieu, Quebec to acquire Medium Range Radar for the Canadian Armed Forces (CAF). This represents another example of significant transfer of Israeli defence technology to Canada. 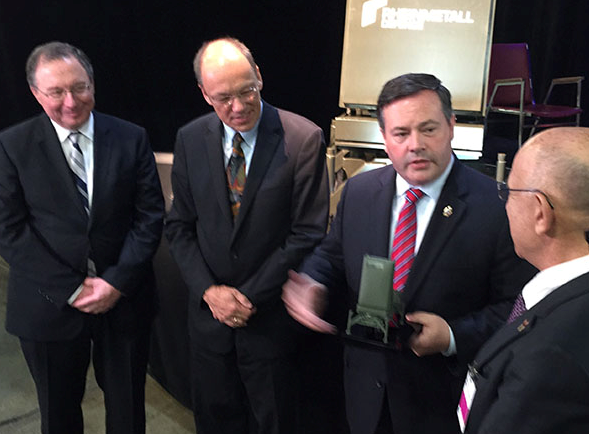 Minister of National Defence Jason Kenney meeting with Israeli ambassador, Rafael Barak, and the people from ELTA Systems who will deliver the state of the art radar equipment.

“We’re moving forward with providing the men and women of the military with the equipment they need to do their jobs in the service of their country.”

According to a statement issued by the Department of National Defence, Israeli Government subsidiary ELTA Systems Ltd. will work with Rheinmetall Canada Inc. to bring the new sensor capabilities to the Canadian Armed Forces.

The improved radar system for the Canadian Army will use cutting edge technology that is part of the successful Israeli Defence Force Iron Dome Air Defence system which currently defends Israel against incoming rocket fire from Hamas and other terrorist groups.

The technology will provide the Canadian Armed Forces with the capability to quickly and accurately locate enemy forces weapons, as well as provide advanced aerial surveillance capability.

Rheinmetall has won contracts to produce 10 Medium Range Radar systems and provide the associated in-service support, with a combined potential value of up to $243.3 million. Working alongside Rheinmetall is subcontractor ELTA Systems Ltd., a group and subsidiary of Israel Aerospace Industries. ELTA Systems Ltd will deliver this radar technology to provide the CAF the ability to locate hostile weapons in concert with other acoustic and radar sensors Canada already possesses. These radar systems could save lives and assist and help achieve mission success.

The radars, capable of detecting hostile indirect fire, locating the position of the enemy weapon, and calculating the point of impact of a projectile, as well as simultaneously tracking multiple airborne threats, are expected to be delivered in 2017.

The two companies will implement a technology transfer program in full conformity with the intent of Canada’s recently announced Defence Procurement Strategy to create local jobs and capabilities and help spur economic growth.

Said Rheinmetall Canada’s President and CEO, Dr. Andreas Knackstedt: “ELTA was considered the partner of choice due to the program’s demanding requirements. The award of the MRR contract to the Rheinmetall/ELTA team is a testimony of Elta’s leading-edge technology and know-how for which it is recognized worldwide.”

Mr. Nissim Hadas, IAI Executive VP & ELTA President said “Together, with our partners in Rheinmetall-Canada, we will provide the most sophisticated C-RAM,air-surveillance and radaravailable, with a significant portion of the production to be performed locally in Canada.”