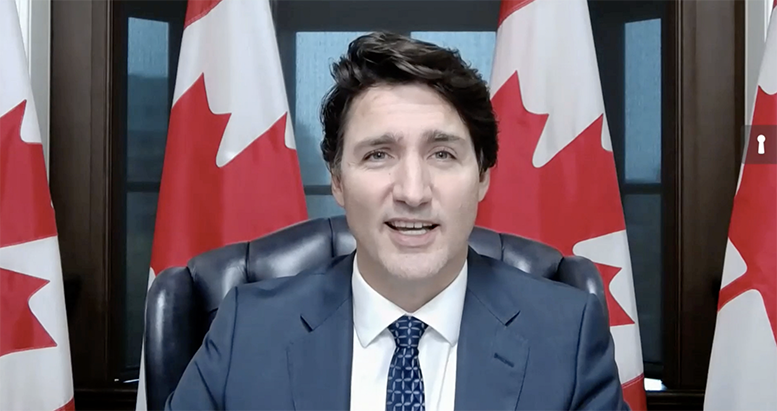 (AJNews) – Canada’s special envoy on preserving Holocaust remembrance and combatting antisemitism is now a permanent national role that will be supported by dedicated resources. Prime Minister Justin Trudeau made the announcement on October 13 during his virtual address at the Malmo International Forum on Holocaust Remembrance and Combating Antisemitism, in Sweden.

Special Envoy Irwin Cotler, who was appointed to the role in November 2020, and Special Envoy to the European Union and Europe and Canada’s Ambassador to Germany Stephane Dion also attended the International Forum as part of the Canadian delegation.

In his remarks, Prime Minister Trudeau spoke about Canada’s work on a national plan to combat hate and called antisemitism a “canary in the coal mine of evil.” He referenced intolerance coming from the far right and far left and reiterated Canada’s commitment to combating antisemitism at home, including the expansion of education materials, online harm legislation, and support for the International Holocaust Alliance (IHRA) working definition of antisemitism.

Jewish advocacy groups including The Centre for Israel and Jewish Affairs (CIJA), B’nai Brith Canada and the Friends of Simon Wiesenthal Centre (FSWC) have been advocating for the Special Envoy role to be made permanent for several years.

“Today represents a milestone for the Jewish community and Jewish Federations across Canada who have been advocating for making the role of Special Envoy permanent, with dedicated resources,” stated Shimon Koffler Fogel, CIJA CEO and President.

“We are pleased to see that the government has heeded our advice, and we thank them for being our allies in the fight against the scourge of antisemitism and for their continuous and unambiguous support for the IHRA definition of antisemitism, an important tool to combat Jew-hatred.”

“This is a positive development in the struggle against antisemitism,” added Joel Reitman, National Co-Chair of the CIJA Board of Directors. “It accompanies the Government’s commitment to fighting hate and intolerance and sets the tone for combating Jew–hatred for years to come. Having the position of Special Envoy and appropriate resources to support it entrenched in the Ministry of Heritage demonstrates that the government’s new mandate includes a renewed commitment to combating antisemitism.”

B’nai Brith Canada congratulated the Prime Minister and his delegation for becoming involved in the Forum.

“The Government has heard B’nai Brith,” said Marvin Rotrand, National Director of B’nai Brith’s League for Human Rights. “We anticipate that much of our proposal to Minister Garneau in our letter sent Oct. 4 will be incorporated into Canada’s pledge. We view this as a true affirmation that the Government will not allow the haters to continue to spew their venom. There should be no hiding – not even in the shadows.”

“Canada’s commitments for Malmo will reassure the Jewish community that the Government is addressing antisemitism and will enhance dialogue between the Government and B’nai Brith,” Mostyn said. “This can only be viewed as a positive step in the right direction.”

FSCW also commended the PM for the numerous pledges that he made at the forum.

“As we see the increased resurgence and mainstreaming of antisemitism in Canada and around the world, Prime Minister Justin Trudeau’s participation in this meaningful international forum to combat antisemitism and promote Holocaust awareness is very important and sends a strong message that the country stands united with its Jewish community and is serious about taking action,” said Michael Levitt, president and CEO of FSWC. “Canada’s pledges to support Special Envoy Irwin Cotler and further promote the IHRA definition of antisemitism are particularly critical and impactful in the fight against virulent Jew-hate.”