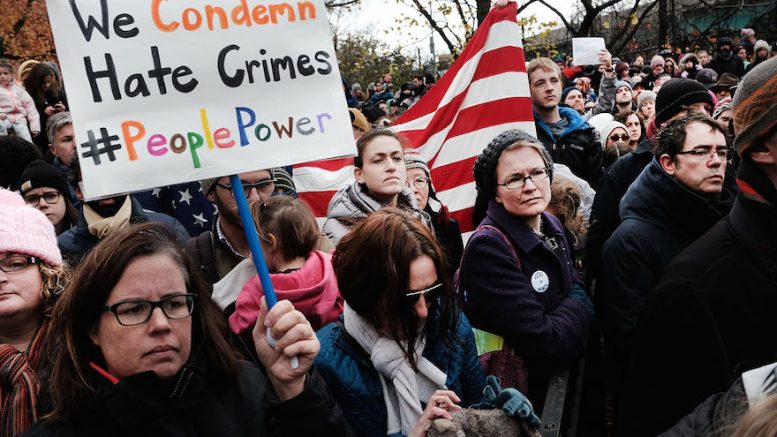 NEW YORK (JTA) – In the two months since the presidential election, American scholars and curators of Jewish history have sent a consistent message: Watch out.

“Our history reminds us of the dangers of racism and bigotry,” The Center for Jewish History warned last week. In a November statement, the U.S. Holocaust Memorial Museum said the “Holocaust did not begin with killing; it began with words.” That same month, an open letter from more than 200 American Jewish historians suggested that it “is not too soon to begin mobilizing in solidarity.”

The statements are rare acts of speaking out, their authors and signers say. Academics and historical institutions generally try to stay above the political fray in their professional lives, focusing more on interpreting what once happened, not what’s happening now.

But a presidential campaign featuring the ethnically charged rhetoric of Donald Trump and many of his followers, and an election aftermath that saw a rise in hate crimes and invective targeting Jews and other minorities, convinced the institutions to raise their voices.

“This was really a watershed moment for me,” said Hasia Diner, director of New York University’s Goldstein-Goren Center for American Jewish History, who helped organize the historians’ open letter. “It made me realize that in fact, as historians, no one is saying x, y or z is going to happen, but we had and have a responsibility to just wave the flag a bit.”

The letter, which was published in the Jewish Journal of Los Angeles one week after the election, was explicit in blaming Trump for fanning the flames of bigotry toward “Muslims, Latinos, women, and others.” It noted how the American Jewish community has flourished since World War II and called on American Jews, mindful of their own past persecution, to stand up against anti-Semitism and other forms of hatred.

“Our reading of the past impels us to resist any attempts to place a vulnerable group in the crosshairs of nativist racism,” the letter read. “It is our duty to come to their aid and to resist the degradation of rights that Mr. Trump’s rhetoric has provoked.”

Throughout the presidential campaign and since the election, Jewish groups have split on how best to condemn anti-Semitism and how explicitly, if at all, to link it to the president-elect’s rhetoric. Some, like the Anti-Defamation League, have not been shy about criticizing Trump on issues like his call for a national registry of Muslims and a campaign ad it said used tropes that historically were used against Jews.

Others, like the Jewish Federations of North America, have reached out to Trump and offered their assistance and counsel without issuing critical statements.

Unlike the historians’ letter, the statements from the historical institutions avoided naming Trump or taking a political stance. But they also invoked the long history of Jewish persecution in urging Jews to stand up against bigotry.

“When the Jews faced annihilation in Europe, we remember that the campaign mounted against us began with hateful words,” read the Dec. 28 statement by Joel Levy, president of the Center for Jewish History. “We must unequivocally protest acts of violence or discrimination motivated by ethnicity, religion, or sexual identity.”

A version of Levy’s statement was issued initially a year ago with slightly different language. That statement, condemning “the toxic virus of Islamophobia” and specifically noting that Jews were once excluded from entry to the United States, came shortly after Trump first proposed a ban on Muslim immigration to the country.

But Levy told JTA that the center was nonpartisan.

“There are hateful voices from many quarters,” he told JTA. “I do not think this a political statement commenting on particular policies of the president-elect. Both statements are about core American Jewish values, and restating them and calling attention to them.”

The Holocaust museum often comments publicly on preventing genocide and opposing bigotry internationally, but its Nov. 22 statement was a rarity, commenting on a white nationalist rally that took place at a building just blocks from the museum. Noting the use of Nazi terms by speakers, the statement invoked Holocaust history and “call[ed] on all American citizens, our religious and civic leaders, and the leadership of all branches of the government to confront racist thinking and divisive hateful speech.”

Tad Stahnke, director of the museum’s Initiative on Holocaust Denial and Antisemitism, said the rally’s proximity and content spurred the statement, but that it was not meant as a comment on broader trends.

“This is something happening just a few blocks from our museum here in Washington, where you have this combination of anti-Semitic racist rhetoric and invocation of Nazi slogans,” Stahnke said, referring to chants of “Hail Trump!” by rally-goers. “That merited a clear statement of condemnation.”

Not everyone believes historians should be commenting on current events, and Trump’s campaign repeatedly denied that his campaign was in any way bigoted or that he was responsible for the white nationalists who endorsed him.

Responding to the historians’ letter in the Jewish Journal, Allan Nadler, professor of religious studies and director of the Jewish studies program at Drew University in Madison, New Jersey, wrote, “So inappropriate. What ever happened to scholarly objectivity, and never foreshadowing history? These historians are violating both principles.”

Levy and Diner both said they weren’t sure how they would react if currents of hate become stronger. And Diner said that no matter what impact the statements have, they allow historians to take their part in a current debate.

“These can be symbolic acts, but symbols are terribly important,” she said. “And if the vast majority of scholars of the Jewish past have said ‘Wait a minute, just keep your eyes open because this could be a disaster,’ it behooves the public to pay attention.”