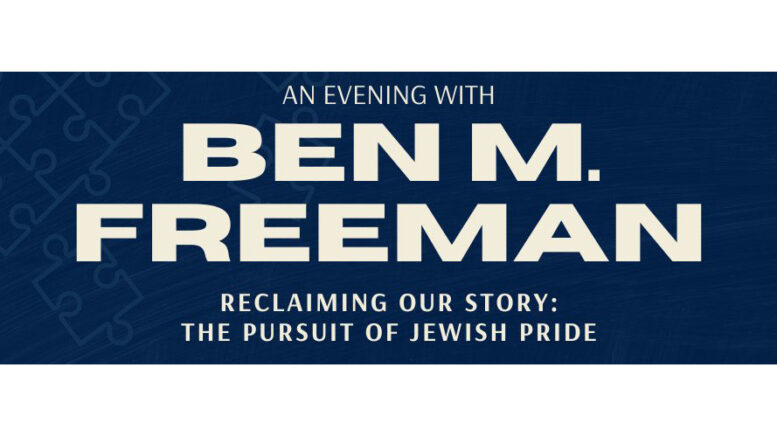 Jewish educator, author Ben Freeman will be in Calgary on November 10 at Central Public Library and on November 11 at Beth Tzedec.

(AJNews) – Those community members who attended Ben M. Freeman’s virtual talk on January 27, 2021—International Holocaust Remembrance Day—encountered a dedicated and articulate proponent of Jewish pride whose personal journey is informed by his Jewishly infused upbringing and his experiences as a gay man who struggled with mental health issues, even attempting suicide prior to embracing LGBTQ+ pride.

A Scottish expat living and working in Hong Kong, Freeman is an educator, author and diversity, equity and inclusion specialist and self-described founder of the “Modern Jewish Pride Movement.” He returns to Calgary on Thursday November 10, this time in person at the Central Public Library. Freeman’s topic that evening is The Enemy from Within: The Impact of Internalized Racism. Click here to register for the event. 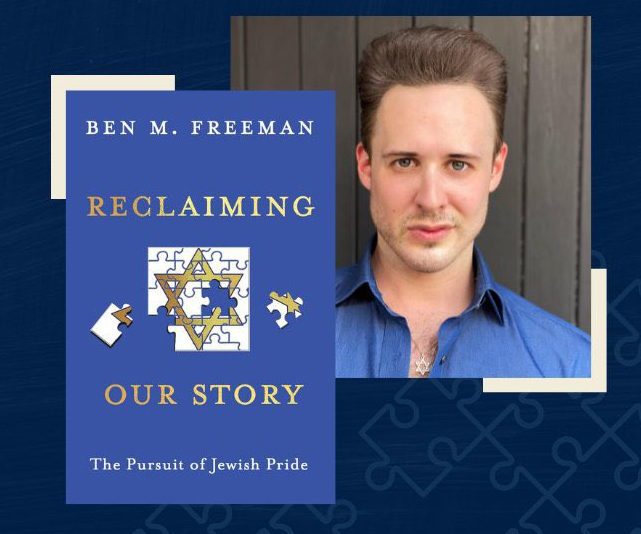 Jewish educator, author Ben Freeman will be in Calgary on November 10 at Central Public Library.

Freeman’s visit to Calgary coincides with the publication of his second book in a planned trilogy. His acclaimed first book, Jewish Pride: Rebuilding a People has now been followed by Reclaiming Our Story: The Pursuit of Jewish Pride.

In his exploration of Jew-hate and Jewish pride, Freeman once again reiterates that Jew-hate is a problem that must be tackled by the non-Jewish world. While it is not a Jewish problem per se, it does, pose problems for Jews.

When internalized Jew-hate is coupled with the erosion of Jewish pride, many Jews find themselves unmoored and struggling with identity crises that cause them to alter or edit their identities in doomed efforts to fit into the non-Jewish world, Freeman says.

Some in that world are only too happy to dictate and define what a “good Jew” is, Freeman adds, illustrating that no matter how much Jews bend themselves out of shape to fit in, it is not enough to keep the wolves at bay.

It is time, says Freeman, to stop looking into this “broken mirror of Jewish identity” and to reclaim our right to self-determination as proud Jews and Zionists.

Freeman devotes the first half of Reclaiming Our Story: The Pursuit of Jewish Pride to peeling the onion of Jew-hate, exploring its history and theory and the ways it has been absorbed and turned inwards by Jews who often blame themselves or one another rather than striking at the true source of the venom.

“Internalised anti-Jewishness leads to the destruction of Jewish self-esteem and can, in the most extreme circumstances, seriously damage Jewish life,” writes Freeman, who adds that it “…leads us to abandon (or at the very least weaken) our commitment to the continuation of Jewish life.”

Freeman doubts that Jews are in a position to eradicate Jew-hatred.

“Despite the instinct we have to fight anti-Jewish hate, there is nothing that Jews can do to truly defeat it, that is the work of the non-Jewish world,” says Freeman.  “All we can (and must) do is fight to reclaim our dignity and to keep it at bay while encouraging the non-Jewish world to set upon its own task.”

Faced with the choice between pride or prejudice, “We must choose pride,” Freeman says.

The prejudices that inform various external definitions of Jews are tackled by Freeman as are the internalizations by Jews of the inevitable “good Jew” and “bad Jew” characterizations. Thus, for example, anti-Zionist Jews brand Zionist Jews as bad Jews, using their own Judaism as a weapon against their own people.  All this, says Freeman “. . . to prove their worth and emphasise their palatability” in spaces where they more often than not find themselves marginalized due to the very fact of their Jewishness.

“Internalized anti-Jewishness (as is the case with all internalised prejudice) is a response to trauma,” says Freeman, who adds that the situation is not of our making and must not be used to shame one another. Rather, he encourages readers to approach this issue with empathy.

Freeman demonstrates how trauma—including intergenerational and epigenetic trauma—can chip away at our Jewish identities and “manifest in self-blame and self-denigration.”

Shedding Jewish anchors to gain acceptance in the non-Jewish world is, according to Freeman, stunningly ineffective in the face of Jew hate.  Yet he relates numerous examples, both historical and current, of the ways Jews lose or bury their Jewish pride through “diminishment,” “denial” and “deployment of Jewishness as a weapon.”

Sometimes, says Freeman, we change our names in order to fit in.

In the period of the Holy Temple, Hellenist Jewish males sought to blend in by reversing their circumcisions through a painful procedure called an epispasm.

During the 1960s, another mutilation embraced by many Jews was rhinoplasty so that something as plain as the noses on their faces wouldn’t give them away.

Freeman also focuses on the difficult balancing act when Jews buy into the notion that “prioritising Jewish experiences somehow puts us at odds with the rest of humanity.”

“This is a ridiculous and hateful proposition,” Freeman says, likening the dance between specificity and universality to traversing a tightrope.

From historical and current accusations of divided loyalty, to the racialization of Jews and, more recently, stunning assumptions that we are at the top of the pile when it comes to white privilege, Freeman lays out the shape-shifting of Jew-hate across time and distance and shows how the haters deploy token Jews to bolster their own religious or political agendas.

On that point, Freeman notes, “A small number of people can cause a great amount of harm.”

Freeman explores the trauma that continues to reverberate in light of the Shoah.

“It led to the realisation by Jews all over the world that no matter how much they acculturate they would not be accepted,” Freeman says.  “We might think this shocking and frightening realisation may have propelled Jews to proudly proclaim their Jewishness, but in some quarters, particularly in America, it had…the opposite effect.”

Midway through the book, Freeman explores how five Jewish individuals have grappled with their own internalized Jew hate and set themselves on a path of healing by embracing Jewish pride.

Freeman urges the organized Jewish community to do a better job of education for community members of all ages and stages—through that lens of Jewish pride—and to provide mental health resources in support of those struggling from the effects of trauma.

“Quality Jewish education is how we develop Jewish anchors, enable Jews to define their own identities and allow Jews to understand that our Jewishness represents more than murder and tragedy,” writes Freeman.  “It is how we enable Jews to defend ourselves against internalised anti-Jewishness. And it is how we teach the framework of Jewish Pride.”

That is a big claim.  Resistance against Jew-hate and pride in our heritage, including our indigeneity to Israel, have kept the light of Judaism alive and sustained us throughout our history, as Freeman himself illustrates throughout Reclaiming Our Story: The Pursuit of Jewish Pride.

Nonetheless, as Freeman cogently argues, Jewish pride has been eroded over time as Jews gazed at distorted versions of themselves in that “broken mirror of Jewish identity,” accepting an externally-directed demotion from a people to a religion and then to a culture.  Absorbed into the mainstream that boiled down culture starts tasting like thin gruel rather than the banquet of Jewish choices Freeman urges his readers to taste and savour.

While Freeman did not invent Jewish pride, he is indeed providing a beacon to those seeking Jewish anchorage and joy.

Ben M. Freeman will speak at the Calgary Public Library on Monday, November 10 at 7:00pm. Copies of his new book will be available for purchase, and an author book signing will follow Freeman’s talk.

The program—part of an ongoing series—is organized by Calgary Jewish Federation in conjunction with CPL and sponsored by the Isadore and Florence Burstyn Memorial Fund for Human Rights and Holocaust Education, the KSW Calgary Holocaust Education and Commemoration Endowment Fund, Viewpoint Foundation, Human Rights and Holocaust Education Fund at the Calgary Public Library Foundation and Beth Tzedec Congregation . Pre-registration is required. Seating is limited to 300.  Library member registration is at www.calgarylibrary. Non-library members can register here.

Calgary Jewish Federation invites everyone to attend a virtual Kristallnacht ceremony which will stream on Wednesday, November 9 at 6:45pm. Then, at 7:00pm, the Beth Tzedec Congregation Jewish Film Festival and Calgary Jewish Federation will screen Reckonings, an outstanding documentary directed by award-winning filmmaker Roberta Grossman that takes viewers back to the secret and tense negotiations between Jewish and German leaders that led to reparations for the suffering and destruction of European Jewry.

“Through a captivating mix of dramatic re-enactments and interviews, Reckonings brings to life the untold story behind the ground-breaking Luxembourg Agreements of 1952 – the first time in history that individual victims of persecution received material compensation from the perpetrators.”

Go to www.jewishcalgary.org for the link to the Kristallnacht ceremony. To access your free ticket to the virtual screening of Reckonings, go to www.CalgaryJewishFilmFestival.com.

On November 11, educator, author and Jewish Pride activist Ben M. Freeman will speak to young adults between the ages of 14 and 24 at a special Shabbat Dinner at Beth Tzedec Synagogue. Tickets for the dinner and conversation with Ben Freeman are $36. Dinner, conversation and a signed copy of Freeman’s latest book, Reclaiming our Story: The Pursuit of Jewish Pride is $54. For more information or to register, go to www.jewishcalgary.org.

Between November 21 and November 25, Calgary Jewish Federation will once again present a virtual Holocaust Education Symposium open to high school students and teachers throughout Alberta. As of September 28, 1,500 students had already been registered. The relatively recent addition of a fall symposium extends the reach of the 38-year-old annual Holocaust Education Symposium which is organized by the Holocaust and Human Rights: Remembrance and Education department of the Calgary Jewish Federation in cooperation with Mount Royal University, the Calgary Board of Education and the Calgary Catholic School District. For more information, go to https://www.jewishcalgary.org/federation-programs/holocaust-and-human-rights-remembrance-and-education.

In other news, Holocaust and Human Rights: Remembrance and Education Co-Chairs Dahlia Libin and Marnie Bondar recently announced that all Shoah Foundation testimonies provided by Calgary Holocaust survivors have been digitally recorded in an initiative that spanned two years.

The original recordings had been housed at the Montreal Holocaust Museum. Now they have been repatriated and can be viewed on the Calgary Jewish Federation website at www.jewishcalgary.org. Individuals wishing to access the Shoah Foundation testimonies are asked to contact Libin and Bondar at holocaustedu@jewishcalgary.org.

If you missed Here to Tell: Faces of Holocaust Survivors when the exhibit premiered at the Glenbow at the Edison, or if you wish to further explore the images and stories of Calgary-connected Holocaust survivors, you will have the opportunity to see a curated portion of the exhibit and the Here to Tell documentary at the Central Library during regular hours throughout the month of January 2023. Tours are currently being arranged for school groups. For more information, go to https://www.jewishcalgary.org/federation-programs/holocaust-and-human-rights-remembrance-and-education