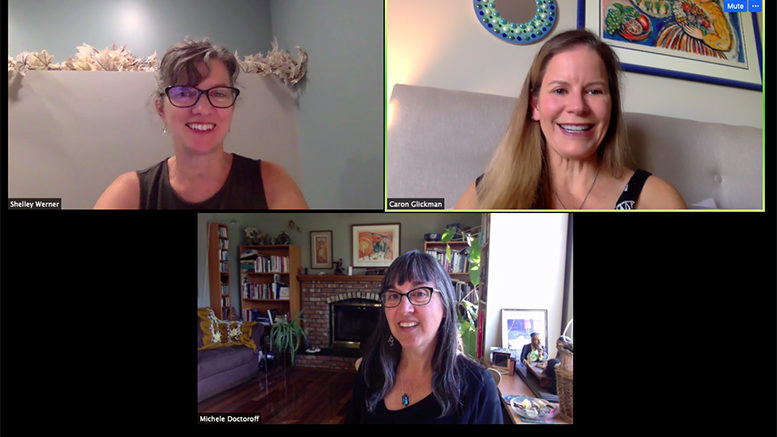 The three women at the the heart of the Calgary -based Art and Scroll Studio - Shelley Werner, Michele Doctoroff and Caron Glickman.

(AJNews) – For many of us, three silver linings of the COVID-19 pandemic have been the gift of time, a nudge toward new and often creative pastimes and the chance to nurture new relationships, albeit from a safe distance and, often, in cyberspace.

Three Calgary women have brought together these strands, weaving them into an endeavour aptly named Art and Scroll Studio, an online initiative that celebrates artists and makers who devote themselves to Judaica.

On October 7, Art and Scroll will be rolling out their first Zoominar, featuring a chat with Sonoma, California-based artist Nina Bonos. A lineup of real-time virtual discussions with other creators and producers of Judaica from North America and around the world will follow. And there is more good news – the virtual journey is free of charge.

Art and Scroll is the heart and soul initiative of Calgary newcomer Shelley Werner – formerly of Winnipeg – and Caron Glickman and Michele Doctoroff, both of whom Werner met after moving to Calgary five months ago.

Doctoroff was among the first to extend a welcoming hand to Werner at the suggestion of Temple B’nai Tikvah Rabbi Mark Glickman. Meanwhile his wife, Caron Glickman, independently encountered Werner. Discovering their shared passion for beautiful Judaica, they began to explore various websites, learning about the creators and makers that produce it. The circle expanded to include Doctoroff and the three women quickly discovered that they were enjoying their Judaica journeys and each other’s virtual company.

“Maybe others would like to visit these artists too,” suggested Caron Glickman who was, in Werner’s words, “not prepared to think small.”

The Art Gallery Girls, as they call themselves, share what Werner describes as a strong desire “. . . to say hello, reach through the screen and meet the makers.”

Art and Scroll Studio has established a presence on both Facebook and Instagram.  As these words are written, the Art Gallery Girls are preparing for the October 7 discussion with award-winning watercolour and mixed-media collage artist Nina Bonos, whose art appeared appeared on the cover of last month’s Alberta Jewish News – Calgary edition. Among her many commissions were spectacular Torah mantles for Beth Israel Synagogue when the Vancouver congregation dedicated its new building in 2014.  Werner will be exploring, in depth, the sources of Bonos’ inspiration – including the Sonoma landscape where she lives and works and how her surroundings influence her work.

This formula will be applied to future virtual live presentations as Art and Scroll Studio explores each guest artist’s inspiration, process and artwork.

In addition to appreciating well-wrought Judaica, Doctoroff, Glickman and Werner are seeking to elevate the profile of artists whose work is seldom displayed in galleries despite its beauty and the time-honoured Jewish tradition of hiddur mitzvah – the beautification of ritual objects so as to elevate the mitzvahs performed in homes and Synagogues.

This theme will be front and centre in an October 26 Zoominar featuring  the work of Columbus Ohio-based scribal artist Pamela Feldman-Hill, who specializes in art relating to Jewish lifecycle events,  including Ketubot (Jewish marriage contracts), and designs encompassing biblical imagery.

Calgary metal artist Milt Fischbein, one of a handful of North American goldsmiths specializing in the ancient tradition of filigree making, will be the subject of a November 10 Zoominar  in which he will chat about his Judaic designs, his artistic journey and insights into the Sephardic history of filigree.

The December 2 live virtual event will feature Galia Goodman, a North Carolina-based artist who illustrated The Promise of the Land, a visually stunning Haggadah that explores ecology and the land in the telling of the Passover story. Goodman fills an important niche by also producing decorative interfaith certificates to mark milestones like weddings, something Werner describes as an “unconventional application based on Judaic tradition.”

While their selected guests must be makers of Judaica, their work must answer Caron Glickman’s question, “Does it stir something in us?”

“We choose our greatest hits,” says Shelley Werner who adds that the artists she has already approached have been fascinated by the initiative, quickly becoming willing and enthusiastic participants.

“There are many more artists and sites in our sights,” Werner promises.

The enthusiasm and complementary personalities and roles of the Art Gallery Girls bode well for the success of Art and Scroll Studio, a virtual salon that transcends borders, allowing for worldwide journeys during this time of contagion.

Doctoroff loves her travels through cyberspace seeking gems of Jewish art and culture and “opening windows of thought to people for whom art may not be a primary focus.”

Glickman, who built a successful dental practice in Seattle before moving to Calgary four years ago, has taken the lead in looking after the business end of the project.  Werner, who created her own design company in Winnipeg, has designed sacred spaces and installations and can speak to artists in their own language.  She will conduct the online artist interviews, speaking with makers about their work as samples are screen shared.

“This has been a flower that has blossomed out of the pandemic,” says Werner who, together with Doctoroff and Glickman, is turning the art adventure into what she calls a “fundemic.”

Who can resist that?

For more information, contact the Art Gallery Girls at artandscrollstudio@gmail.com.