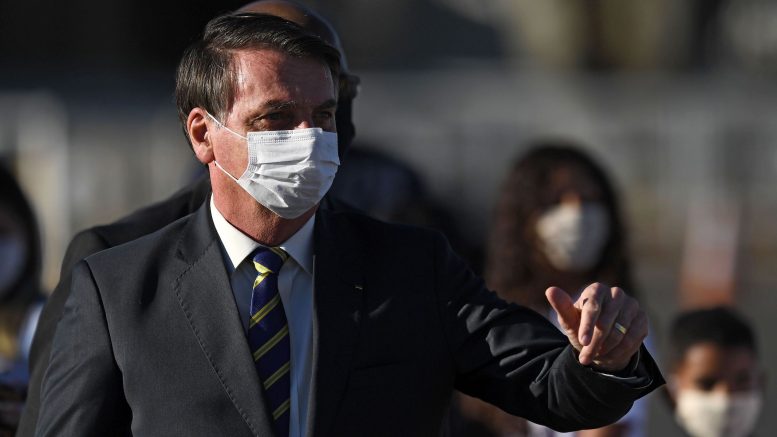 Brazilian President Jair Bolsonaro, wearing a face mask, gestures as he speaks to supporters while arriving at the flag-raising ceremony before a ministerial meeting at the Alvorada Palace in Brasilia, on May 12, 2020, amid the new coronavirus pandemic. (Photo by EVARISTO SA / AFP) (Photo by EVARISTO SA/AFP via Getty Images)

By Marcus M. Gilban, RIO DE JANEIRO (JTA) — Brazilian president Jair Bolsonaro is being criticized for a new slogan about combating the coronavirus which resembles the infamous Nazi inscription at the entrance to the Auschwitz concentration camp: “Arbeit macht frei,” or “work will set you free.”

“It is unfortunate to see, once again, issues that are dear to Judaism and humanity in general be trivialized and emulated, offending the memory of victims and survivors, at such a difficult time for our country and the world,” Fernando Lottenberg, president of the Brazilian Israelite Confederation, Brazil’s umbrella Jewish organization, told the Jewish Telegraphic Agency.

Bolsonaro’s supporters claim the phrase is inspired by the biblical passage “And you will know the truth, and the truth will set you free,” from John 8:32, which Bolsonaro often cited during his presidential campaign. Titled “COVID-19: The Truth,” the video slams the Brazilian media and describes his government’s action to fight the pandemic.

“It is impressive. Every government measure is twisted to fit narratives. In the campaign, they used to make swastikas. Now they use functional illiteracy to misinterpret a text and associate the government with Nazism. I, the head of the Communications secretariat, am Jewish!,” tweeted Fabio Wajngarten, the communications minister and the man who helped produce the video.

Last week, Bolsonaro angered Jewish groups for speaking next to an Israeli flag at rally in Brasilia, where some called for disbanding the country’s courts and a return to a state of authoritarian rule. On April 22, the American Jewish Committee demanded an apology from Brazilian foreign minister Ernesto Araujo, who compared COVID-19 social distancing to concentration camps. After a wave of international media coverage, he said he was misunderstood.

“The use of the expression ‘the work sets you free’ attacks the memory of Holocaust victims and offends the sensitivity of the survivors,” said Rabbi Michel Schlesinger, spiritual leader of Latin America’s largest congregation, Sao Paulo’s 2,000-family Congregagao Israelita Paulista synagogue, in an interview with BBC Brasil on Monday. “Unfortunately, it is not possible to disconnect this movement from the other references of the current government to the Nazi regime.”

Be the first to comment on "Brazil’s president criticized for coronavirus motto that recalls ‘Arbeit macht frei,’ the infamous Auschwitz gate sign"