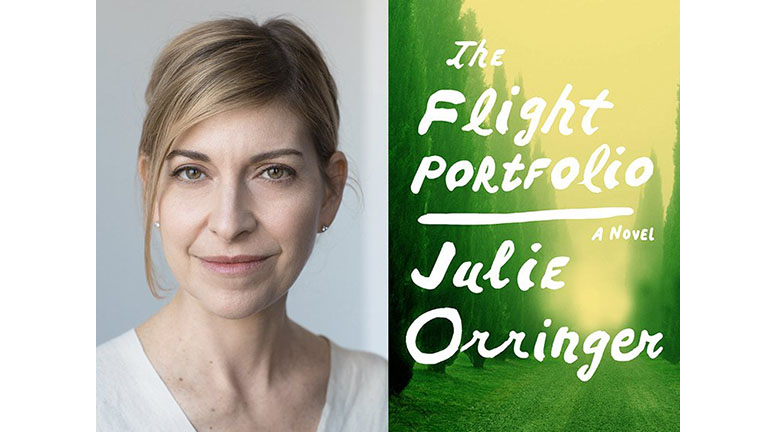 (AJNews) – Since we are well into a pandemic that screams for literary diversion, this is a good time for a great read. One was recently delivered by Julie Orringer, bestselling author of How to Breathe Underwater and The Invisible Bridge, a sweeping historical saga set in Paris and Budapest during World War II and the Holocaust.

The subject matter of Orringer’s most recent novel, The Flight Portfolio, came to her attention as she was researching for The Invisible Bridge (a novel based, in part, on her grandfather’s life). Thankfully she chose to spin it into a novel all its own.

In The Flight Portfolio, Orringer tackles the true story of journalist and humanitarian Varian Fry, the first American honoured by Yad Vashem as Righteous Among the Nations. Fry is credited with having saved the lives of more than 2,000 Jewish refugees, among them some of Europe’s greatest artists and thinkers. During 1940 and 1941 he headed the Marseilles office of the Emergency Rescue Committee, an organization he co-founded with support from American First Lady Eleanor Roosevelt and some well-heeled philanthropists including Peggy Guggenheim.

While Orringer’s novel is based, in large measure, on Fry’s well-documented wartime efforts (researched by the author for some three years before she even began to write), her treatment of Fry’s personal life and its nexus with historical events often falls in the realm of imagination.

Fry works feverishly, employing both legal and illegal means to pluck the likes of Russian-French painter Marc Chagall, French author and poet Andre Breton, Hungarian anthropologist Arthur Koestler, German political philosopher Hannah Arendt and German physician, biochemist and Nobel Laureate Otto Meyerhof  from the talons of the Nazis and their Vichy collaborators.  In the midst of all that, Fry is confronted by the sudden return to his life of Elliott Schiffman Grant (a fictional character), his lover during their Harvard student days.

Fry struggles to stay focussed on the rescue of 200 anti-Nazi and Jewish artists, writers and intellectuals whose works and brain trust will otherwise be lost to the world. Learning of the ERC, more and more refugees line up outside his office to beg for help.  Meanwhile, Grant asks Fry for help in finding and extracting the imperilled son of his current lover, Gregor Katznelson (a fictional story line).  The flames of Fry’s unextinguished passion for Grant are fanned, threatening Fry’s previous resignation to an incomplete life with his stateside wife, Eileen.

What emerges and intertwines in Orringer’s imaginative telling, is a harrowing rescue story, a love story, an exploration of Fry’s internal and external struggles, and a window into the devastating effects of racism and antisemitism both in Europe and in the United States.

Why fictionalize an already amazing story? Orringer says, “A novelist, free to extrapolate, may draw the veil aside.” Thus she fills in the blanks left by previous historical, biographical and autobiographical explorations of Fry and his heroic deeds.

Fry published his memoir, Surrender on Demand, in 1945, an account that did not reference his sexuality.  In A Quiet American: The Secret War of Varian Fry, biographer Andy Marino, discusses Fry’s homosexuality.  The Fact that Fry was gay was also acknowledged by Fry’s son, James, who set the record straight in a letter to the editor following Cynthia Ozick’s review of The Flight Portfolio in which Ozick had stated that Fry’s homosexuality existed only in the realm of “hunches and hints.”

In the same review, Ozick expresses discomfort with Orringer’s fictionalization of the Holocaust in a world where the Shoah is receding from memory as Holocaust deniers ply their trade.

While the risks of fictionalizing the Shoah should always be cautiously weighed, one must also take into account the intent of the writer. In The Flight Portfolio, Orringer retells the story of Varian Fry with a veracity that was impossible at a time and in a place where coming out of the closet posed tremendous, even existential, threats. The fact that Fry had to cloak his essence led to painful consequences depicted in The Flight Portfolio and even more tragic ones in Fry’s later years, which fell beyond the novel’s scope.

In her novel, Orringer creates a strong sense of place and time, appealing to the senses in often poetic prose, occasionally straying into some purple patches, especially at the beginning of the novel.

Fry emanates from the page convincingly while Grant is a slipperier fish.  But perhaps this is not unintentional. Grant is a man with secrets, including one more potentially damaging than his sexuality. It feels authentic that he is opaque.

Orringer shines in her characterizations of some of Fry’s clients, colleagues and acquaintances in Marseilles, including the heiress and socialite Mary Jayne Gold who, in real life as in the novel, flew her own plane between European capitals living it up even in the midst of the conflagration.  Connected and irrepressible, she plays a colourful and important role in the rescue work of the ERC both as a philanthropist and volunteer as did ERC staffer Miriam Davenport and Leon Ball, a cowboy from Montana who, until his own disappearance, guides refugees across the Pyrenees toward freedom.

These and other characters often act as Fry’s Greek chorus, giving voice to the impossible choices Fry was forced to make while lives hung in the balance.

Fry had everything to lose and nothing to gain in his effort to get endangered Jews out of France before Hitler’s Vichy collaborators could turn them over to the Nazis and, ultimately, the ovens of Europe’s death camps. His story, though well documented, is surprisingly little-known.

Orringer’s timing couldn’t be better. At one point in The Flight Portfolio, Fry contemplates the things that terrify him including “the idiot dictator shrieking nonsense at the world.”  If that doesn’t resonate in 2020, what does? The daily news reminds us that diseases even deadlier than COVID-19 continue to threaten freedom today.

Fry knew it then; Orringer reminds us now – in a genre that is more accessible and appealing for many readers than history books.

Be the first to comment on "Book review: The Flight Portfolio, by Julie Orringer"