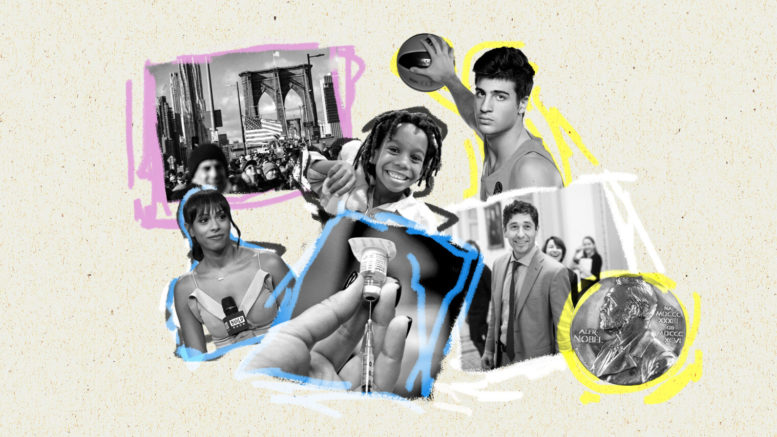 Even this year had its bright spots. (Getty Images; photo design by Grace Yagel)

But just because COVID-19 dominated the headlines and our personal lives, that doesn’t mean there weren’t any Jewish bright spots. Plenty of history was made, from a march of tens of thousands against anti-Semitism to a new kind of vaccine that Jewish doctors helped create, to a Jewish vice-presidential spouse.

Here are some of the Jewish stories that helped distract us from the pain of the past year.

The Jews involved with the vaccine

Several Jewish scientists have been at the forefront of the rush to produce an effective COVID-19 vaccine, trying to alleviate the suffering inflicted on the world by the virus in the past year.

There is Mikael Dolsten, the Swedish Jewish head scientist at Pfizer, who was key in helping the pharmaceutical giant produce the first approved vaccine and talked to the Jewish Telegraphic Agency about the role of immigrants in scientific innovation and the new form of mRNA vaccines. Tal Zaks, an Israeli, is the chief medical officer of Moderna, the other American company to produce a vaccine authorized by the FDA. And the CEO of Pfizer, Albert Bourla, is a Greek Jew proud of his heritage — Israeli Prime Minister Benjamin Netanyahu claims that helped Israel become one of the first countries to secure a Pfizer vaccine contract.

Vice President-elect Kamala Harris wasn’t the only member of the Biden presidential ticket to make history in November. Her husband, Doug Emhoff, became the first “second husband” in American political history — and the first Jewish spouse of a president or vice president. He has relished the role, speaking at events aimed at Jewish voters and with Jewish politicians.

Along the way, Emhoff and Harris have helped charge a wave of love for intermarried families. The couple released a video together this month about Hanukkah — “one of our favorite holidays in our big, modern family,” Emhoff said.

The 6-foot-8, nearly 350-pound offensive lineman for the Pittsburgh Steelers of Chamorro and African-American ancestry became one of the Jewish community’s favorite sons this year.

After fellow NFL player DeSean Jackson made headlines in July when he posted a series of anti-Semitic messages on social media, Banner was among the most prominent people to call him out and say publicly that Jews “deal with the same amount of hate, similar hardships and hard times” as the Black community. Banner said he was partly inspired to speak out after being in Pittsburgh during the Tree of Life synagogue shooting in 2018.

Following Banner, a stream of other Black athletes and commentators, including the former basketball stars Charles Barkley and Kareem Abdul-Jabbar, took stands against anti-Semitism.

Banner’s love for the Jews didn’t stop with one post — after what he called an outpouring of love from the community, he donated some of his earnings to a Tree of Life-related charity and tried challah to raise money for his charitable foundation. His thoughts on the Jewish bread, via the video he released? “That is fire, wow!”

The year of the celebrity Hanukkah video

Maybe it was all of the quarantine isolation. Maybe it was the sense of solidarity brought on by the pain experienced around the world this year. Whatever the reason, this was the year that a large chunk of the celebrity zeitgeist, Jewish and non-, had fun marking Hanukkah.

Non-Jewish rock star Dave Grohl and his Jewish producer posted eight entertaining covers of songs by Jewish musicians, one for every night. Haim, the Jewish pop band, marked the holiday like never before, from song and dance to a guitar giveaway. Daveed Diggs, the Black and Jewish star of “Hamilton,” among other things, gave us a delightful Hanukkah rap (for kids). The Jewish Broadway star Nicolette Robinson and her non-Jewish Broadway star husband Leslie Odom Jr. covered “Maoz Tzur” for a holiday album and chronicled their family’s holiday experience on Instagram. And the list didn’t stop there.

Before 2020, Israel only had formal diplomatic relations (and historically not the warmest of relations) with two neighboring Arab countries, Egypt and Jordan. As 2020 ends, Israel now has relations with the United Arab Emirates and Bahrain, and pending ties with Sudan and Morocco (it also formalized ties with Bhutan, the tiny Buddhist-majority nation known for prioritizing the happiness of its citizens).

While the deals include tradeoffs that have made some on both sides of Congress’ aisle uncomfortable — including advanced military weapons to the UAE and taking Sudan off the U.S. list of terrorism sponsors — the moves have also been widely lauded for enlarging the Arab world’s acceptance of Israel. The small communities of Jews living in those countries have rejoiced, and Israelis have been pretty excited, too — over 50,000 of them have already visited the UAE, one of the world’s glitziest vacation spots.

It’s just a fact: Jews are known for their proclivity for winning Nobel Prizes. So much so, in fact, that the concept features in all kinds of strange theories about Jewish intelligence.

But 2020 was an extra-successful year on the Nobel front. Academic Paul Milgrom shared the economics prize for his discoveries in the field of auction theory. Poet Louise Gluck won in literature for her “for her unmistakable poetic voice that with austere beauty makes individual existence universal.” And Harvey Alter, a researcher for the National Institutes of Health, shared the Nobel in medicine for helping identify the hepatitis C virus. (Not to forget two retired Jewish mathematicians won the Abel Prize, which is seen as the Nobel equivalent for a field that does not award one.)

One break from the heaviness of a pandemic High Holidays came in the form of a beaming 6-year-old in Australia, Bibi Shapiro, who went viral with his version of “Avinu Malkeinu.” His mother, Nina, told JTA that she never meant for the video to become public — but was glad it did.

“People have said it’s made them happy and given them hope,” she said, “and even though I don’t understand it, the fact that it has done that to people especially at this time in the world, I’m so grateful for it.”

Bibi appeared over Zoom during Yom Kippur services at Central Synagogue in New York City, collaborated with a favorite singer from his native South Africa and spurred an international conversation among Jewish children’s musicians, showing the global reach of good news.

A historic march against anti-Semitism

It’s hard to remember a time before the pandemic raged through the country this year, but as the calendar turned to 2020, the New York City area was reeling from a spate of violent anti-Semitic attacks, including a Jersey City kosher store shooting and a stabbing in Monsey, New York. Orthodox Jews in Brooklyn were the victims of a sharp uptick in random assaults.

In response, local Jewish groups helped organize one of the largest marches against anti-Semitism the country has ever seen, which symbolically started in Lower Manhattan and crossed the Brooklyn Bridge.

While its impact was blunted by the pandemic, the march offered a sense of optimism and unity to start the year.

An Israeli phenom makes the NBA

The lanky 6-foot-9 forward with heaps of potential (he’s just 19), born to a Jewish Israeli mother and Muslim Serbian former Israeli basketball player father, has not been afraid to show off his Jewish pride — he even lit a Hanukkah menorah in a video on the Wizards’ Instagram page.

The Wizards have embraced Avdija’s identity — and the new fans it has produced — by creating a Hebrew Twitter account. The team’s Jewish announcer called him “the mensch off the bench on Hanukkah!” in his first preseason game, and Avdija was in the starting lineup for the club’s regular season debut, albeit a losing one, in which his coach said the Israeli was “fantastic.”

In 2019, Minneapolis’ Jewish mayor, Jacob Frey, was a rising star — and sex symbol. He made significant change in the city’s historically fraught zoning rules, endearing him to many fans on the left, and became a Twitter target for President Trump. But in the aftermath of George Floyd’s death at the hands of police officers in his city, Frey was thrust into the center of the country’s raging debate on police reform. His refusal to defund the city’s police department made him a poster child enemy for many progressives.

Just before Rosh Hashanah this year, though, he had a joyous reprieve — the birth of his first child, a girl he and his wife, Sarah Clarke, named Frida.

“For us, her birth leading into Rosh Hashanah symbolizes new beginnings and hope in the midst of tough days,” Frey tweeted. “She’s our reminder of a better tomorrow.”

Be the first to comment on "10 heartwarming Jewish stories from 2020, a year to otherwise forget"