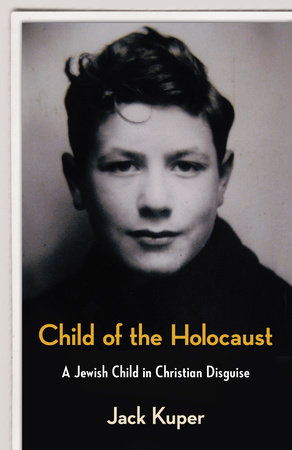 (EJNews) – Child of the Holocaust: A Jewish Child in Christian Disguise (ISBN: 978-0-7352-3670-7) is a remarkable true story of a young boy struggling to survive in World War II Poland.

Jankele Kuperblum was just eight years old when he came home to find everyone in his family gone. The night before, Germans had come to his village in rural Poland and taken away all the Jews. Now alone in the world, he uses his wits to survive; he learns that with his fair features he can pass for Christian. He travels from town to town in a desperate search for safety and shelter, living in fear of being arrested or killed for being Jewish. Not only has he lost his home and his people – he’s forced to abandon his identity.

Author Jack Kuper tells the story of his youth in a powerful childhood memoir. On his journey, he encounters a variety of people, some who react to him with overt hate and others who show him reserved kindness. But in every situation, he changes his name and makes up an elaborate fictional backstory to explain how he came to be separated from his Christian family. His very survival depends on his ability to keep his story straight and deceive the people who employ him and befriend him. As soon as he is discovered, he is forced to relocate.

Jankele forgets his language and abandons his religion in order to survive. He wanders through Nazi occupied Poland for four years, with no place to hide and no one to trust. At each stop in his journey, he is fearful of being recognized as a Jew. He has nightmares that he will be discovered and comes to loathe his Jewishness and question what G-d is allowing him to survive.

Child of the Holocaust is a true story about adversity and triumph. Jankele survives the war and emigrates to Canada at the age of 15 and eventually becomes an acclaimed Canadian author. His journey is powerful and heartbreaking; it is a remarkable story of resourceful survival.

Child of the Holocaust is a fast-paced story that is well written and gripping. The reader cares about Jankele and even understands the behaviors of the people who he encounters. The characters are layered and relatable. The book has been continuously in print since it was first published in 1967 and has been translated into several languages. It is part of the curriculum on the Holocaust in schools across Canada, the United States and Italy and is a must-read book for everyone aged 12 and up. The current edition was published by Penguin Random House on January 29, 2019 and includes some beautiful archival photos of the author, his family and some of his war time employers.

Nearly thirty years after the publication of Child of the Holocaust, Kuper published a sequel to the book, After the Smoke Cleared, which won the Jewish Book Award for Holocaust Literature and chronicled his complex reunion with his father in the post-war years.

Be the first to comment on "Book Review: Child of the Holocaust – A Jewish Child in Christian Disguise"