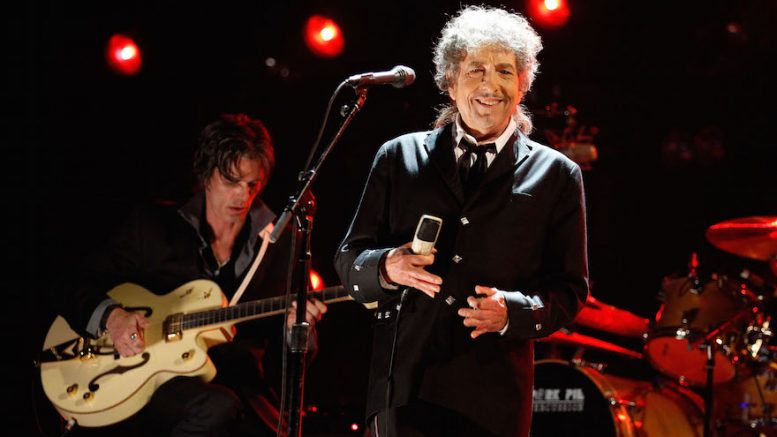 (JTA) — Singer-songwriter Bob Dylan said in a speech read at the Nobel Prize awards presentation that he “never could have imagined” that he would receive the Nobel Prize for Literature.

“If someone had ever told me that I had the slightest chance of winning the Nobel Prize, I would have to think that I’d have about the same odds as standing on the moon,” Dylan wrote in the speech read Saturday night by the U.S. ambassador to Sweden, Azita Raji, in Stockholm. “I recognize that I am in very rare company, to say the least.”

Dylan, who last month told the Swedish Academy in a letter that he would be unable to travel to the Swedish capital to receive his Nobel Prize, citing “pre-existing commitments,” said in the letter that “I’m sorry I can’t be with you in person, but please know that I am most definitely with you in spirit and honored to be receiving such a prestigious prize.” He said it took him “more than a few minutes to properly process” the fact that he won the prize.

He said he thought that William Shakespeare would have thought of himself as a dramatist – wondering where he could procure a human skull for Hamlet and how to stage his plays — rather than considering if what he wrote was literature.

Singer Patti Smith performed Dylan’s “A Hard Rain’s A-Gonna Fall” in an arrangement for the Royal Philharmonic by Hans Ek, but had to apologize after blanking out on some of the lyrics due to nervousness.

Born Robert Allen Zimmerman and raised Jewish in Minnesota, Dylan, 75, wrote some of the most influential and well-known songs of the 1960s. His hits include “Blowin’ in the Wind,” “Like a Rolling Stone” and “Times They Are a-Changin’.”

Dylan in his speech said when he started writing songs as a teenager, his big dream was to make a record and hear his songs on the radio.

“I’ve made dozens of records and played thousands of concerts all around the world,” he said. “But it’s my songs that are at the vital center of almost everything I do. They seemed to have found a place in the lives of many people throughout many different cultures, and I’m grateful for that.

“Not once have I ever had the time to ask myself, ‘Are my songs literature?'” he added, concluding: “So, I do thank the Swedish Academy, both for taking the time to consider that very question, and, ultimately, for providing such a wonderful answer.”

Dylan is still required to deliver a Nobel lecture in order to receive the $927,740 prize. The lecture must be given within six months starting from Dec. 10, and can be given at the place of Dylan’s choosing. The academy has indicated that the lecture could be a concert.

Also speaking at the banquet, the Swedish Academy’s literary historian Horace Engdahl said Dylan “gave back to the language of poetry its elevated style, lost since the Romantics.”

Be the first to comment on "Bob Dylan speech at Nobel: Never had time to ask myself if my songs were literature"