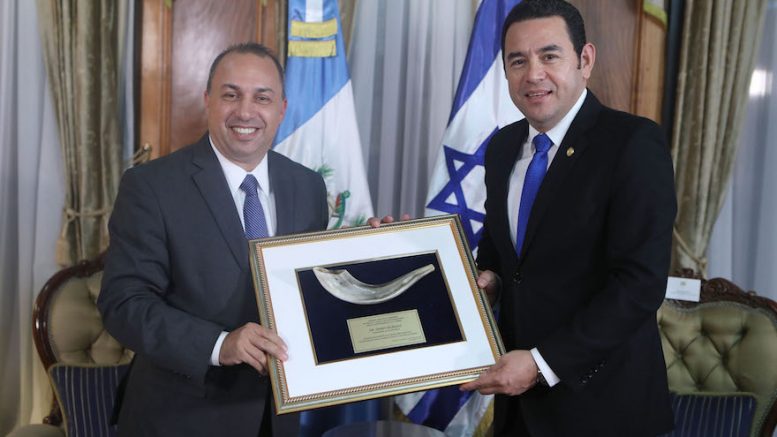 RIO DE JANEIRO (JTA) — The president of Guatemala was honored with an award from an international Jewish organization for his decision to move his country’s embassy to Jerusalem and for his unwavering support of Israel.

Jimmy Morales received the Human Rights Award from global and regional B’nai B’rith officials during a ceremony on January 25 in Guatemala City.

“We praised Morales for his courage and determination for the embassy announcement and for recognizing that Jerusalem is the capital of Israel,” said B’nai B’rith International Director of Latin American Affairs Eduardo Kohn. “Additionally, B’nai B’rith reiterated our commitment to human rights, the fight for democracy and our relationship with Guatemala.”

Morales said that moving the embassy to Jerusalem is “the right action to take legally and historically.” He added that Guatemala is “the United States’ strongest ally” in combating and preventing terrorism in America.

“The Jewish people will always be grateful to Guatemala for its crucial role in Israel’s birth, and for the great roles then-Ambassador Jorge García Granados and then-President Juan José Arevalo played in recognizing the Jewish state,” added B’nai B’rith Latin America Vice Chair Marcelo Burman, who gave the Central American leader a shofar and a plaque highlighting his country’s record of defending human rights.

Morales announced the embassy move on Dec. 24. In a Facebook post, he said that he had instructed his country’s chancellor “to initiate the respective coordination so that it may be.” The decision followed a conversation with Israeli Prime Minister Benjamin Netanyahu.

The announcement was made in front of an image of Guatemalan and Israeli flags fluttering side by side in the wind. The leaders, Morales said, spoke about “the excellent relations that we have had as nations since Guatemala supported the creation of the State of Israel.”

Days before, the U.N. General Assembly passed a nonbinding resolution rejecting any recognition of Jerusalem as the capital of Israel in reaction to President Donald Trump’s pronouncement on Dec. 6 that the United States would recognize Jerusalem as Israel’s capital and begin taking steps to move its embassy there from Tel Aviv.

Morales, who enjoys a large base of conservative Christian support, visited Israel in November 2016, to mark the 69th anniversary of the Partition Plan for Palestine vote in the United Nations. Shortly after his election in 2015, Morales visited a synagogue in Guatemala City, met with members of the Jewish community and declared his desire to visit Israel.

Guatemala is home to about 1,000 Jews out of a population of 15 million.