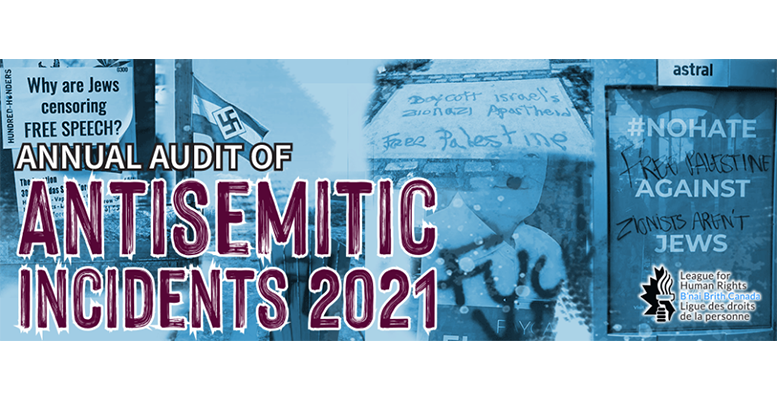 (OTTAWA)– Canada experienced another highly disturbing year for antisemitism in 2021, according to B’nai Brith Canada.

For the sixth consecutive year, records were set for antisemitic incidents in the country. There was a 7.2% increase from 2020.

This is one of several troublesome facts revealed in the 40th Annual Audit of Antisemitic Incidents, released today by B’nai Brith Canada’s League for Human Rights.

Nearly eight antisemitic incidents occurred every day in Canada in 2021.

The actual number of antisemitic incidents recorded in 2021 was 2,799. This marked the fourth successive year in which the 2,000 plateau was exceeded.

There was a 733% increase of violent antisemitic incidents in comparison to 2020.

Online hate has become the preferred method of targeting Jews. B’nai Brith logged 2,093 incidents of online hate, or an increase of 12.3% over 2020.

During the Hamas – Israeli conflict in May, there were several large anti-Israel rallies held in Canada, leading to a record number of attacks on Jews, with 250 recorded incidents in the month. In some cases, individuals displaying Israeli flags were beaten in plain view of police officers. Individuals ended up in the hospital with serious injuries. Property was damaged, stolen and vandalized. Some reported having feared for their lives at these events when they realized the severity of the situation. In one case, two men were arrested after driving around Côte Saint-Luc, a suburb of Montreal with a Jewish majority population, making threats that they would harm Jews.

Among other examples of antisemitic incidents in Canada in 2021:

“Despite the dismal numbers posted in 2021, there is always hope for improvement,” said Michael Mostyn, Chief Executive Officer of B’nai Brith Canada. “Better reporting of hate crimes and incidents, better training and resources for police departments to recognize and combat antisemitism, may all make a difference, if achieved.”

Marvin Rotrand, National Director of B’nai Brith’s League for Human Rights, added: “Giving higher profile to cases where perpetrators are charged and sentenced, the propagation of the International Holocaust Remembrance Alliance definition as well as more funding and resources to combat hatred will also help us turn the tide against antisemitism and help build an inclusive country for all.”

The Annual Audit of Antisemitic Incidents, which tracks and monitors trends in antisemitic hatred, is the authoritative document on anti-Jewish bigotry in Canada, cited regularly by law-enforcement agencies, government bodies and human-rights agencies worldwide.

To read the 2021 Audit of Antisemitic Incidents in full, CLICK HERE.