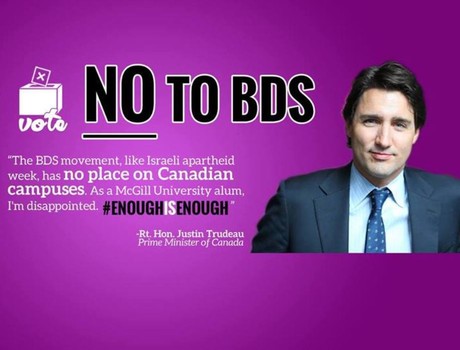 Just on the heels of the bipartisan vote in Canada's parliament condemning BDS, the McGill University Student Society voted in favour of a motion to support the anti-Israel BDS movement.

On Tuesday, February 22, the Students’ Society of McGill University (SSMU) voted in favour of a motion to support the anti-Israel Boycott and Sanctions movement on campus. However, with only 2% of the student body voting, the motion will not be ratified until all McGill students have the opportunity to vote, by online ballot, in the coming week.

It is shocking to see that, at the same time as the Canadian Parliament was rejecting the vile anti-Israel Boycott Movement for what it is — antisemitic propaganda vilifying Israel and the Jewish people, aiming at their annihilation — students at McGill chose to support such a movement,” said Michael Mostyn, CEO of B’nai Brith Canada.

“As is typical, the movement organizers attempted throughout the debate at the SSMU General Assembly to argue that the call for boycott has nothing to do with anti-Semitism or discrimination against any particular ethnic, cultural or religious group. However, the fact that the discussion returned again and again to ‘Jews’ and ‘Jewish students’ shows how wrong this is. Zionism is the recognition of the political rights of the Jewish people and the denial of those rights by the Boycott Movement was a vote in favour of anti-Semitism.

“We have been working closely with students at McGill over the past several weeks, in an effort to see this motion defeated. McGill University should acknowledge that the presence of anti-Israel boycotts on campus make many Jewish and pro-Israel students feel targeted and unsafe. Many students on the B’nai Brith Young Leadership Committee have told us that they feel there are few places at McGill where they can express their opinions, even in writing or on social media; they did not want to be mentioned by name in any publication, because they fear reprisals for speaking out.

“The Boycott organizers have bullied students over the course of three years, continuously raising the issue and intimidating dissenters until the motion was passed. At the General Assembly one student, Mollad, a U2 Arts student, described this intimidation: ‘The last time I came up here to speak, as an Arab, against the BDS motion, I was called a traitor by the people in the audience for my opinion’. Despite the repeated denials, he described the atmosphere of antisemitism running throughout the movement, and told the meeting that ‘before this motion has even passed, two nights ago, the Facebook page of the president of Israel on Campus was attempted to be broken into with an anti-Semitic fake email address.”

“This vote is one battle in the on-going struggle against antisemitism that Canada, Israel and the Jewish people face,” added Mostyn. “We want to thank all the students who worked hard to counter this motion, and who have been tireless advocates for Israel on campus. We will continue to work closely with them in encouraging all McGill students to vote online this week and have their voices heard on this important issue.”