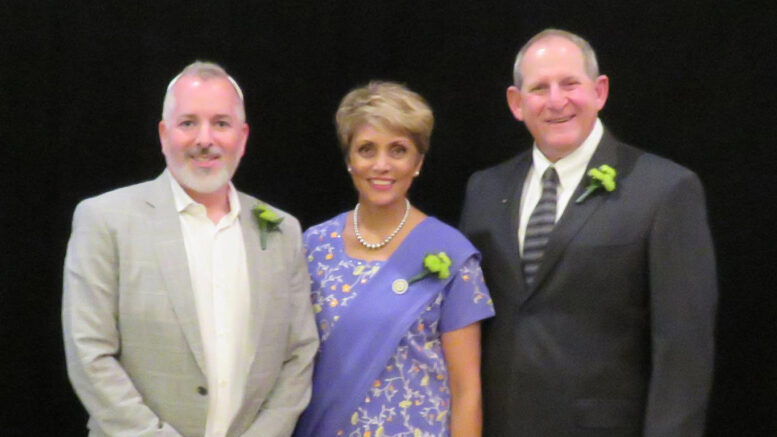 The atmosphere at Beth Tzedec Synagogue was electric as attendees—many greeting each other for the first time in more than two years—schmoozed while enjoying cocktails, a sumptuous spread of hors d’oeuvres and dinner by Roma Catering, and speeches and presentations stickhandled by celebrity MC Dave Kelly.

While even COVID could not stop the triumphant return of the dinner, it did alter it with some supporters opting to enjoy a recording of the evening’s highlights.

“Being recognized by B’nai Brith is particularly relevant today,” said the Ambassador. “B’nai Brith’s commitment to justice really resonates with me.”

In a warm address informed by Jewish values of Tzedakah and Tikkun Olam, Ambassador Cohen spoke with passion about the joint commitment of the United States and Canada to uphold the values of democracy and to repair the world.

“The concept of tikkun olam is particularly relevant in times like these when there are those who are unnecessarily suffering in the world as a result of a few who wish to cause harm or in defiance of those around the world who are trying to erase people’s histories, cultures and traditions,” Ambassador Cohen said.

“We live in a world today that is need of repair and healing,” said Cohen, referencing Russia’s “illegal and unprovoked invasion of Ukraine and its butchering of thousands of innocent civilians.”

Cohen spoke of the joint efforts by the United States and Canada to support Ukraine and ensure energy security, “…not just for ourselves, but also for democracies around the world, especially our European friends and allies who are most affected by Russia’s weaponization of energy.”

“I know that we will continue to enjoy collaborative success in repairing the world as a result of our unique bilateral relationship, and we can be comfortable relying on the values of exceptional organizations like B’nai Brith to continue to lead the way,” Ambassador Cohen said.

During a brief address, B’nai Brith Lodge #816 President Darren Bondar presented $10 thousand to the Calgary Food Bank and another $10 thousand to Jewish Family Service Calgary in support of their Wynne Thal Pantry/Miriam’s Well.

In addition to feeding the hungry, proceeds from the B’nai Brith Dinner will be allocated by the Calgary Lodge to other deserving organizations and causes within the Jewish community and the Calgary community at large.

All of the proceeds from the 50/50 Draw and the Silent Auction will go to BBYO (B’nai Brith Youth Organization). BBYO members once again rolled up their sleeves to support the event, running the coat check and selling 50/50 tickets, among other tasks.

BB Canada CEO Michael Mostyn appeared in a video that described the mandate of the national organization, particularly in the areas of advocacy, care and sports.

Mostyn, who attended the dinner together with Abe Silverman, the Edmonton-based BB Canada Manager of Public Affairs for Alberta—then brought live greetings from the national organization. Notably, Mostyn expressed appreciation to Alberta Minister of Justice Tyler Shandro, who was in attendance, for his role in ensuring the provision of kosher food for Jews serving time in Alberta prisons, an issue recently resolved due to lobbying by Chabad Lubavitch of Edmonton, Chabad Alberta and B’nai Brith Canada.

In addition to Minister Shandro and the honourees, other dignitaries attending the dinner included Calgary Glenmore MLA Whitney Issik and City of Calgary Councillor for Ward 9 Gian-Carlo Carra.

A highlight of the evening was a moving tribute by Dr. Eric Babins to his “oldest and dearest friend,” Max Lipsman, who was saluted for his 47 years of service to the community as a Jewish communal professional and a professional volunteer.

“It is virtually impossible to meet a young person in Jewish Calgary who hasn’t been influenced by Max,” said Babins, citing Lipsman’s long list of accomplishments on behalf of organizations including the JCC, Camp BB Riback, the March of the Living and Beth Tzedec Congregation.

“We are lucky to have him committed to us,” Babins said.

While Lipsman most often prefers to serve quietly, encouraging others to enjoy the spotlight, he commanded centre stage in a moving address in which he recalled the influence of his late father-in-law Shep Kaplan, of blessed memory, who first introduced Lipsman to Lodge #816.

Lipsman lauded BB Calgary for the financial help they have consistently given to the community’s most vulnerable, “… with no strings attached.”

Recalling the challenges he faced growing up in Montreal as the child of immigrants and Holocaust survivors—including the bullying he experienced for “being different,” Lipsman said that as he grew “older and considerably bigger,” he began to defend himself.

“At times that resulted in me getting into trouble,” said Lipsman who  added that organizations like B’nai Brith reached out to help kids like him, setting them on a path of “acceptance and tolerance” by supporting their experiences in residential camps, athletics and the like.

Lipsman connected the dots between the community-building goals of B’nai Brith and the path he eventually forged as a community leader and a fierce advocate for the underdog.

Lipsman shared the award with his wife Rocky—AKA Rochelle Lipsman—and daughters Simmy and Kyla, reserving his concluding comment for his community.

“Thank you for trusting me in providing what I could, and I hope I made a difference,” Lipsman said.

Though the exuberant crowd sometimes gave MC Dave Kelly a run for his money, he managed the podium with humour, keeping the train on its tracks through speeches, silent and live auctions (the animated spotters alone worth the price of admission) and general mayhem.

The final highlight of the evening was a fireside chat between MC Dave Kelly and Mayor Jyoti Gondek who reminisced about her first memorable encounters with Ambassador Cohen. Responding to a range of open-ended questions, Gondek spoke to issues of faith, the ways in which her late father inspired her to enter public service, and the challenges and blessings of living with her aging mother.

Sensitive to the needs of seniors, Gondek spoke about how her personal experiences have motivated her to ensure that seniors presenting to City Council are listened to with patience and compassion and taken into consideration when city planning decisions are made.

Gondek did not shy away from questions about controversial issues, including the derailed arena/events centre deal.

“I am hopeful we can carry on with the negotiations at some point,” the Mayor said. “Right now we are trying to get partners to the table and it looks pretty good.”

Other topics touched on during the Mayor Gondek’s chat with Kelly included the fallout after the City of Calgary’s climate emergency proclamation.

“The fact that you agree that the climate crisis is real does not mean that you dislike the energy industry,” said Mayor Gondek who rued increasing polarization around this and other issues.

“My goal is to demonstrate to the rest of the world and to investors…that we take this seriously, the mayor added.

“We’re not starting an energy transition,” said Gondek. “We’ve been having these conversations for a very long time…. We, as a City Council were simply trying to keep up what the sector was already doing.”

The Mayor commented on the treatment of women in politics, including the verbal assault on Deputy Prime Minister Chrystia Freeland in Fort McMurray, angry protesters outside her own home, and the now-infamous costume horse’s head ominously placed on her property.

“When you expect us to be transparent with you, and we are, please understand how hard it was, and please give us the support that we desperately need, because if we don’t have honest conversations, we will never get better.”

On that note, it is worthy of noting that B’nai Brith, which began as a male fraternity, has in recent years become egalitarian, an evolution reflected in its membership policy, hiring and selection of honourees.

“Like B’nai Brith, each of this year’s honourees embrace and embody outreach, diversity and the fight against antisemitism and racism,” Darren Bonder told AJNews following the dinner.

Although the crowd was smaller than the usual 600-plus gathering, the efforts of a small but dedicated core of leaders, headed by Bondar and supported by BB Calgary Executive Director Polina Brener and dozens of volunteers, ensured that the return of the annual dinner was a resounding success, netting $75,000 in support of those who need it most.

To find out more about the work of B’nai Brith Calgary Lodge #816 or to join and/or donate, go to bnaibrithcalgary.org.