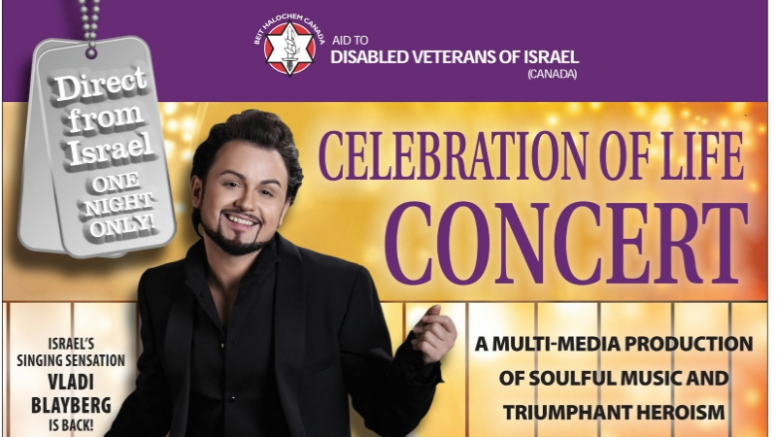 An extraordinary Beit Halochem Celebration of Life Concert will be held in Calgary on June 5.

All this just since September 13th of 2015 with no end in sight to this wave of terror. Something extraordinary, yet surgically predictable, can be observed on social media where these events get highlighted and discussed in a big hurry. As soon as the world got a whiff of the human disaster in the Paris attacks, Facebook lit up in solidarity and sympathy.  Red, blue, and white splashed on every photo and covering every profile picture became a standard that even made some feel on the outside of the empathy train if they abstained. Strength in numbers of this phenomenon, was definitely and abundantly clear. 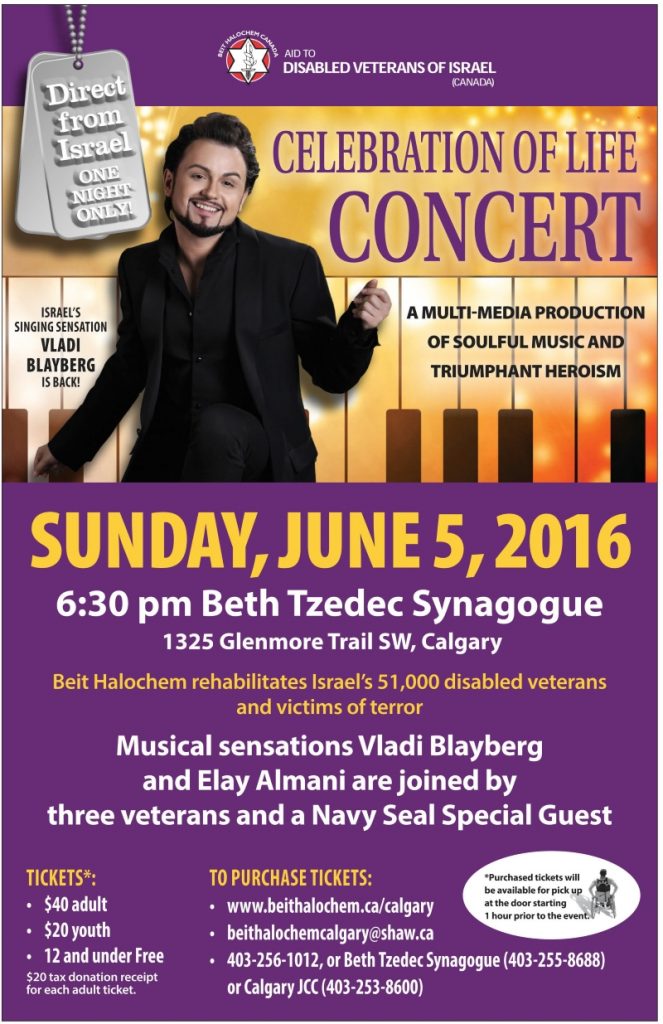 Not unlike the next disaster of Islamic terror in Brussels this past March. Orange, black and white were now the favored and widely displayed colors on every post and profile photograph on social media. But let’s not stop there. Memorials of teddy bears, flowers, cards and posters, complete with occasional stomping on the Israeli flag were erected on street corners all over Europe.  Empire State Building, Eiffel Tower, CN Tower, Buckingham Palace, Government buildings throughout the world and a vast number of public spaces, parks, buildings all over the globe proudly displayed their unity in the sharing of the European sorrow. Even the tiny two foot tall shrubs outside of Calgary’s Jack Singer Hall on Stephens Avenue were lit up in the colors of the French and Belgian flags.  And who can forget the ever popular “I am Charlie” proclamations after Islamic terror took 11 lives at the Charlie Hebdo Paris office.

And what exactly is wrong with all this? Perhaps nothing, if what was missing from the popular sentiment wasn’t so glaringly obvious. Perhaps it is the colorless, odourless, but thundering silence of Facebook when Israel bleeds and weeps, that we should take note of.  Aside from the few usual suspects, Facebook users remained undisturbed and totally indifferent to the reported barrage of terror happening in Israel.  “I am Israel” wasn’t even whispered!  White and Blue never made the cut.  But then again, expecting it to would be rather indulgent and irrational of our tribe, wouldn’t it?

White and Blue does make the cut where Beit Halochem Canada (BHC) is concerned. And it is BHC that begins the work of rehabilitating and taking care of the terror victims when the world couldn’t care less. In fact, Beit Halochem Canada, Aid to Disabled Veterans of Israel, as the organization is officially called, takes care of all victims of terror in Israel, irrespective of their religious or ethnic affiliations.  Israelis of all ages, genders and colors, be they Bedouin, Muslim, Christian, Druze, or any other, fall victim to the onslaught of Islamic terror on the streets, check points and borders of Israel. And this year BHC has had to step to do more than its usual share of funding for the care of wounded Israelis.

On June 5th, 2015, Beth Tzedec Synagogue, will once again lite up with the sounds and colors of Israel in the 7th annual CELEBRATION OF LIFE Concert. Once again, Calgary, Toronto and Montreal will be treated to a single night of unapologetic and very proud solidarity with Israel and her defenders. Once again, Jews and non-Jews alike will clap along to the infectious musical highs of Vladi Blayberg and Elay Almani. For those of us present at past concerts, Vladi is no newcomer to the Beth Tzedec bimah stage. A few years back, he easily and confidently won us over with his tantalizing multi-lingual tenor, singing in Yiddish, Russian, Ukrainian and Hebrew. Back by most popular demand, this international sensation is back for one more time.

Joining the musicians, are four heroic individuals. But only three of them can have their name mentioned in print. From a lone soldier Mya Shmuel to a medal-winning athlete Oren Blitzblau to Yogev Offir who received a special decoration by the Chief of Staff – three extraordinary valiant individuals will share their stories of courage and triumph in a multi-media presentation. And if that’s not enough, the currently anonymous elite Naval Officer, will recollect a treacherous day of his fearless and superhuman commitment to Israel’s security and defense. His story will be heard for the first time and will undoubtedly leave us on the edge of our seats and in awe of this special brand of bravery and heroism.  What’s even more intriguing, is that most of us are acquainted with this hero, albeit it somewhat superficially and hastily. All that will change on Sunday, June 5th. Nothing in life is guaranteed, but I can guarantee a minutes-long standing ovation for this Navy Seal, without even the slightest hesitation.

Beit Halochem Canada aids in the rehabilitation of 51,000 injured and/or disabled veterans of Israel and victims of terror. Tickets to this concert are entirely in support of this effort. BHC does not receive any funds from umbrella organizations or federations and exists solely because of donations and ticket sales from people like the 900+ Albertans who will pack the house on June 5th. To get your tickets and be a part of a movement that puts Israel first and foremost, with an unwavering, unapologetic decades-long history of support, please go online: www.beithalcohem.ca/calgary or purchase via Beth Tzedec, JCC or by calling 403-256-1012. Ninety three cents of each dollar ends up directly at the 5 beautiful rehabilitation centers throughout Israel for the immediate medical and therapeutic care of each victim of terror and wounded defender of Israel. And that’s something all of us can take great Canadian pride in.