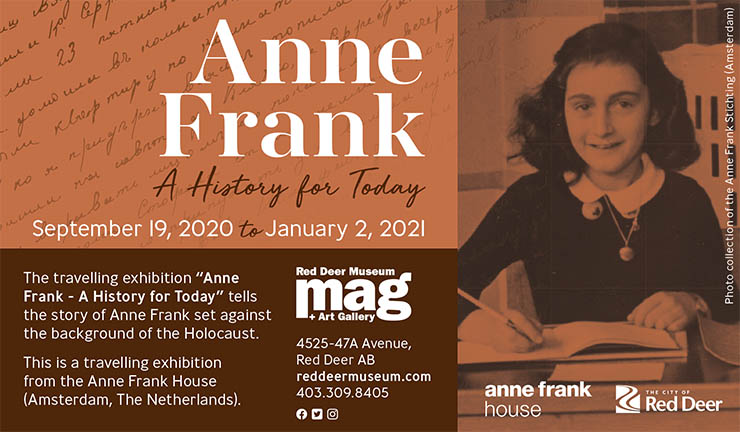 (AJNews) – While in hiding from the Nazis, in the early 1940’s in the Netherlands, Anne Frank wrote in her diary, “I keep my ideals, because in spite of everything I still believe that people are really good at heart. How wonderful it is that nobody need wait a single moment before starting to improve the world.”

The Jewish teenager’s inspirational words resonate loudly in today’s climate of systemic racism in our Canadian justice system and the increase of racism on our Canadian streets including right here in Alberta.

One of the most effective ways of reversing the trend is by educating people and young people in particular about what racism looks like, how harmful it is and what can be done about it. A travelling exhibition about the wartime experiences of Anne Frank is a powerful tool to do just that.

Anne Frank – A History for Today, a travelling exhibition from the Anne Frank House (Amsterdam, The Netherlands), has been on display around the world and will resume its exhibition at the Red Deer Museum + Art Gallery (MAG) from September 19, 2020 to January 2, 2021. This exhibit aims to bring Anne’s life story to the attention of people all over the world to encourage them to reflect on the dangers of anti-Semitism, racism and discrimination and the importance of freedom, equal rights and democracy. As part of this exhibit the MAG will be showing artworks created by Red Deer high school students in response to the Anne Frank story.

In March, before the Red Deer MAG shut down temporarily due to the COVID pandemic, Red Deer Mayor Tara Veer spoke about the importance of social unity and shared her insights from her 2019 visit to Second World War Holocaust sites in Eastern Europe.

Veer’s 10-day journey through Berlin, Krakow and Israel last year was part of a delegation of law enforcement, government and education leaders from across Canada.

According to the Red Deer Advocate, the mayor, who toured former concentration camp sites and spoke to a Holocaust survivor, said she wanted to be part of the delegation because its purpose aligned with council’s safety and inclusive community objectives.

“I am deeply concerned about the safety crisis and social divisiveness that’s at times present in our community,” explained Veer in a column she wrote for the Advocate.

Her words resonated loudly last month following an incident in Red Deer where a peaceful anti-racism rally was met with violent counter protesters. “We unequivocally denounce racism in our community,” she stated following the incident. “It is highly concerning for our community that the unacceptable actions of some have incited division and violence in our city.”

The event punctuated the need for exhibits that promote tolerance, understanding and acceptance.

The mayor and other leaders returned from last year’s intensive tour empowered to counter hate and to promote tolerance of others.

Veer stated that speaking out is an important way of “raising awareness of the dangers of social divisiveness,” and the need to “protect all people from political and social tyranny.”

Lorna Johnson, Red Deer MAG’s executive director told the Advocate that this is especially important in these politically turbulent times. By understanding the Holocaust, Johnson added, “we can all take a stand against discrimination.”

This exhibition tells the story of Anne Frank set against the background of the Holocaust. It makes use of images from the Frank family and quotations from the Diary of Anne Frank. Each panel displays information about the most important developments of that time: the rise of National Socialism, the Second World War and the persecution of the Jews.

“The Diary of Anne Frank continues to be a moving testament to the optimism of youth in the most trying situations,” says Johnson.

The aims of the exhibition are to increase knowledge of youth and public on the historical events of the second world war, the Holocaust and the life of Anne Frank and to foster dialogue between attendees on topics such as the dangers of discrimination and the importance of tolerance and the human rights.

In many countries Anne Frank has become the symbol of the mass murder of Jews during the Second World War. In 1947 the diary of Anne Frank was first published. It is now translated into sixty languages and has become one of the best-known documents about the Holocaust. The building where the Frank family hid is now a museum.

The Red Deer Museum + Art Gallery is Central Alberta’s leading establishment for the research, collection and presentation of visual art and material culture that is related to the region. It is a vibrant and inclusive gathering place and its exhibitions and programs promote the enjoyment of art, culture and the he history of Central Alberta.  The Museum presents an on-going series of temporary exhibitions and interpretive programs. www.reddeermuseum.com

For more details regarding Red Deer MAG or the exhibition Anne Frank: A History for Today contact Kim Verrier, Exhibitions Coordinator at kim.verrier@reddeer.ca, 403-309-8440.

Be the first to comment on "‘Anne Frank: A History for Today’ is on exhibit at Red Deer MAG until January 2021"